To Live is to Doubt

Last Saturday afternoon I tried, without much success, to get tickets to see Doubt. Unfortunately, all they had left were partial-view seats. I decided instead to go across the street to the Longacre and attend the matinee of Who's Afraid of Virginia Woolf? from a full-view seat. On the strength of its multiple Tony nominations Doubt has been doing bang-up business at the box office. These days, arriving at the box office a few hours before curtain will not guarantee that you will get in. (It might be a first that on the same street, right across from one another, two plays are running where the entire cast of each production is nominated for the Tonys). Doubt is a hit, and I decided to go back to the Martin Beck after work yesterday and try my luck and see what tickets they had available for the next day. Wouldn't you know it: they had front row center seats for the Saturday matinee. I scooped up that ticket up so fast! I've never gotten a front row seat to a show before. At my first Broadway show I came pretty close -- fourth row on the aisle to see Christopher Plummer's Tony award performance in the musical Cyrano. No wonder I've been hooked on theater ever since.

Watching Doubt from the front row is an experience that absorbs you even closer inside the actor's playing area. You can't get over the incredible proximity and all that goes with it: cinematic closeups, pores, wrinkles, lint on black costumes, flying saliva that could spray you, the natural tones of the unmiked voice, and, because of the lack of an audience in front of you, the incredibly privileged certainty that this play is being performed only for you. And, of course, there are the magical moments that can only happen when you sit this close. I don't think that I will ever forget the scene between Father Flynn and Sister James as they sat on a bench, their emotions exposed and raw. Heather Goldenhersh, giving the performance of a lifetime in the role of Sister James, breaks down and cries, her hand going up to cover her face. When she lowers her hand again, a single solitary real tear slowly rolled down her right check, followed by another from her left eye. It was one of the most magical moments I have ever experienced in the theater. It left me with much admiration for this new star, (this play marks her Broadway debut) and I hope that next Sunday Tony puts out the welcome mat for her.

Cherry Jones is currently giving the best performance by a woman on Broadway. As the tough-as-nails Sister Aloysius, the principal of the St. Nicholas School in the Bronx, she wears her inscrutable Sisters of Charity habit as an armor for the fight that will follow as she intends to bring down the jockish parish priest Father Flynn, whom she fears might be molesting the school's first black student. Brí­an F. O'Byrne's Father Flynn is an unforgettable creation: enlightened by Vatican Council II, but possibly racked by private demons brought on by a new freedom, this priest wants to be relevant and bring this Bronx parish into the twentieth century. He can coach the basketball team after school, while delivering sermons on Sundays based on jottings from a little notebook he always keeps with him. If he represents the uncertain future of the Catholic Church, then Sister Aloysius is the institution's anchor, always advising the young Sister James to stay true to ideals that could probably be traced back to Elizabeth Ann Seton, the founder of the Sisters of Charity. 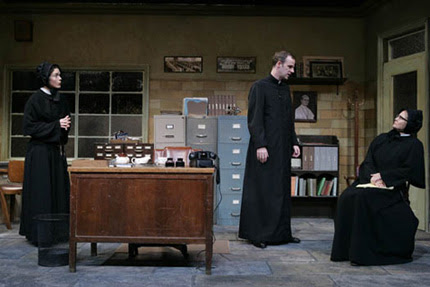 One of my colleagues at work, who as a child was taught by nuns in the fifties, has nothing but admiration for these wonderful creatures who commanded respect and attention, and who could control an overcrowded classroom with their mere presence. My friend is fond of saying that the cure for today's education woes is "a five-foot nun with a six inch ruler." Doubt's author John Patrick Shanley seems to be of the same opinion. The playwright dedicates Doubt to "the many orders of Catholic nuns who devoted their lives to serving others..." He then adds: "Though they have been much maligned and ridiculed, who among us has been so generous?"

After the play I met two of its stars, Adriane Lenox, who is nominated for the Tony for her fine work as the boy's mother, and Mr. O'Byrne. As Ms. Lenox was signing my playbill, I told her that I was rooting for her next Sunday at the Tonys. She seemed genuinely pleased to hear this. She smiled, patted me on the arm and said "Thank-you, its really tight!" I agreed with her. The category of Best Featured Actress includes great performances from Dana Ivey (The Rivals), Mireille Enos (Who's Afraid of Virginia Woolf?), Amy Ryan (A Streetcar Named Desire) and her own colleague, Ms. Goldenhersh. It was also a pleasure to shake hands with Mr. O'Byrne, congratulate him on a job well done, and wish him luck on his own nomination for Best Actor.

Doubt is one of the finest American plays in years. That generosity that Mr. Shanley writes about seems to be present on and off the stage at the Martin Beck Theater. You should go and experience it for yourself.
Posted by Vincent Vargas at 8:47 PM

Wow, what a great site. I will bookmark this site and return often. It's nice to see sites like this.

Please visit my website and let me know what you think. Disney World Vacations

Hi there ##NAME##, I am out searching for the latest information on ##LINK## and found this site. Although ##TITLE## wasn't what I was looking for, it certainly sparked my attention. I can see how, I came across this site when I was looking for related information. I am glad I stopped by today.