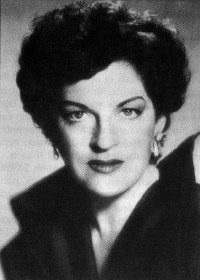 The following letter was posted on the Internet newsgroup rec.music.opera. It is a personal note from soprano Astrid Varnay rememembering her friend and colleague Birgit Nilsson. Astrid Varnay was one of the great Brünnhildes of our time, and a staple at Bayreuth during the post-war Wieland Wagner years. Here at the MET I was fortunate to hear her live in the cast of the MET's premiere of Kurt Weill's The Rise and Fall of the City of Mahagonny. Here is her note:

Even with our helmets on, we never locked horns.

There were simply too many bonds that linked us inseparably: born in the same country - Sweden – under the same sign - Taurus - in the spring of the same year –1918. I got here first, on April 25th as the daughter of visiting Hungarian singers in Stockholm and she showed up on May 17th down the road a piece on her parents’ farm in Västra Karup in Skåne. She never stopped ribbing me about the fact that I arrived a couple of weeks before she did.

Once, after I had moved from Elektra to Klytämnestra, while she continued in the title role, I was on my way to a rehearsal, when behind me on the sidewalk I heard an abrasively cranky child whining incessantly "Mommy, mommy..." When I finally decided I could ignore this no more and turned around in exasperation to beg the parent to pay a little attention to the yammering kid, I realized that the "brat" was my friend Birgit. I did get her back, though. Years later on one of our many phone calls I feigned one of those very formal secretarial voices and inquired if I might speak to Madame Nilsson – when she took the bait and said: "This is she speaking," I switched to my own voice and said "It’s your mother!" It became an identifying mark for our many conversations over the years.

We were colleagues, not rivals. There was never any jealousy, although perhaps occasional, and I hope pardonably small surges of envy emerged on both sides. I coveted those effortless clarion high C’s, and she confessed that she would have enjoyed having some of my dramatic skills, although hers could be fairly incendiary. Actually we didn’t share that many roles. Apart from three or four pillars of both careers: Brünnhilde, Isolde, Fidelio and the aforementioned Elektra, our repertoires pretty much went their own ways. She never sang Ortrud, and I wouldn’t have touched Turandot with a Yang-Tse barge pole. And we loved singing together: Those performances and the joy of our collaboration forged a friendship that will remain affixed in my heart forever.

A talent like Birgit’s comes along – if you’re lucky – perhaps once in a lifetime. How fortunately we are that it happened in our lifetime. A friend and colleague like that is even rarer, and it was a blessing for me to have worked with her.

Wow! Thanks for posting that, Vincent. Just think of those two famous sopranos interacting. Wow!

I'm going to put a link to your post on my blog, if that's okay. Everybody should read this!

ps I may be coming up to NY this spring ... am looking for coffee & music buddies. What language(s) do you teach and will you be in town March/April?