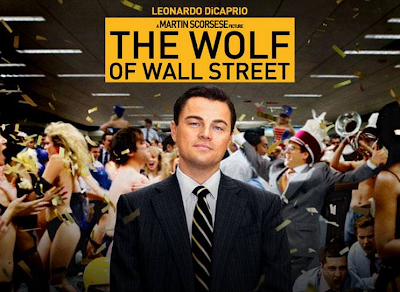 In "Show Biz Bugs," a 1957 Warner Brothers cartoon directed by Friz Freleng, Daffy Duck is furious that Bugs Bunny has gotten top billing at their vaudeville theater, and he is determined to prove, once and for all, that he is the biggest star. Failing to impress the audience time after time, Daffy performs the ultimate act: he drinks combustible liquids and then swallows a lighted match. He achieves utter success with the audience by exploding himself: a stunt that unfortunately he can only do once.

This is how I feel about Leonardo DiCaprio's performance in Martin Scorsese's hyper-kinetic new film The Wolf of Wall Street. The actor has been led to the very heights of Oscar begging, with director Scorsese carefully crafting a ton of scenes, both poignant and comic, to show the actor's range, and to impress audiences, especially those members of the Academy. Actually, the entire three hour movie (written with a frantic sweep by Terence Winter) is geared towards the gold for DiCaprio. The thing is, that he is really good in it! The best, the most believable, and the most impressive he has been since he became Mr. Scorsese's muse. He had to resort to pulling a Daffy Duck, but he's still alive.  He's exploded and he's hit the heights with this one. It's Oscar time, or else!

The structure of the film is the rags to riches story of Jordan Belfort, a stockbroker in Wall Street who loses his job on Black Friday, but inspired by the life and business lessons of his mentor, senior stockbroker Mark Hanna (a memorable cameo by Matthew McConaughey), he re-invents himself, rapidly becoming the head-honcho of a small company on Long Island selling penny stocks to unsuspecting investors and receiving 50 percent commission. It doesn't take long for Jordan to break out on his own, along with neighbor Donnie Azoff (Jonah Hill), and form a new enterprise that rapidly becomes a billion-dollar company: a giant on Wall Street called Stratton Oakmont, complete with a hungry lion for a logo. Soon, the excesses of big money rear their ugly heads, and Jordan and his associates descend into a maelstrom of drug-fueled lavish parties and orgies, while their questionable business practices raise a red flag with the ever-watchful FBI.

More or less, this is the rags to riches story found in Mr. Scorsese's Goodfellas (1990), and The Wolf of Wall Street arrives complete with many of the same stylistic touches found in the earlier film, including voice-over narration by the leading character, and the creation of a milieu of a life of crime where the participants are scum, but lovable, or at least interesting. In many ways, it is the same film, this time bigger, louder, longer, slicker, but morally empty, lacking the Catholic guilt harbored in the ethnic memories of the old neighborhood.

Aside from Mr. Hill and Mr. McConaughey, both of whom are sure to be nominated for the big awards for their fine performances, there is a very likable Jean Dujardin as a slick but sleazy Swiss banker, and newcomer Australian actress Margot Robbie as Naomi, the bombshell Jordan meets at his house in the Hamptons, and soon weds.

The Wolf of Wall Street may not be the most original Scorsese movie, but it does add the most interesting chapter in the on-going collaboration between director and leading man.
Posted by Vincent Vargas at 12:50 AM