The following article appeared in the New York Times. It gives a brief impression of opening night of the 2005 Bayreuth Festival.

Boos, jeers and whistles greeted the 94th Bayreuth Festival's new production of Wagner's Agence France-Presse reported yesterday. Described as a cold and clinically intellectual interpretation, the performance, which opened the festival in Germany on Monday, starred Robert Dean Smith and Nina Stemme as Tristan and Isolde. It was staged by the Swiss director Christoph Marthaler in his Bayreuth debut and conducted by Eiji Oue, the first Asian to conduct in the Festspielhaus, the Bayreuth Festival Theater. At the end, Mr. Oue kissed the floorboards in a gesture of reverence to Wagner, who conceived the event. To be performed through Aug. 28, all 30 performances of five Wagner operas, including Lohengrin, Tannhäuser and Parsifal, are sold out.

Posted by Vincent Vargas at 10:08 PM No comments:

The annual Bayreuth Festival opened today with a performance of Tristan und Isolde. The unusual new production (see pictures below) was conceived by Swiss director Christoph Marthaler, with sets and costumes by Anna Viebrock. The Bayreuth Orchestra was under the direction of Eiji Oue. Here are some scenes from this production. 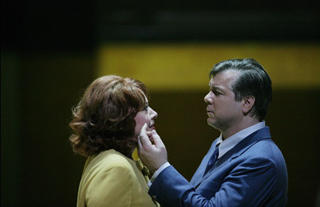 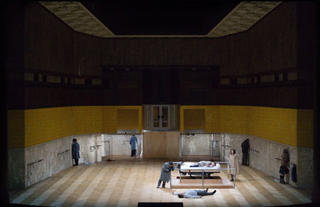 Posted by Vincent Vargas at 5:33 PM No comments: 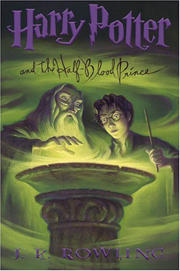 It's now been a little over 24 hours since the publication of Harry Potter and the Half-Blood Prince, J.K. Rowling's latest trip to Hogwarts, and I also know that many of you have already ripped through the 600-plus page novel as if they were giving free magic wands away at the end to the early-finishers.

Why do people read a Harry Potter novel so fast? I am not Mr. Speedy when it comes to reading, but neither do I go at Cecil Turtle pace either, especially when the book is as enjoyable as this latest Potter installment. Every two or three years when a Harry Potter book is published, I marvel at the breakneck speed that certain people devour the whole thing. Kids as well as adults stay up all night, and appear the next morning, bleary-eyed, with a zombie-like but satisfied stare, and announce to the world that they've done it!

Since I like to savor novels and an author's words, a book like Harry Potter and the Half-Blood Prince will be my constant companion for a few days. This is the leisurely summer pace that I like to devote to Rowling's works. Following a tradition that goes back to a number of previous Harry Potter installments, this one was published on a Saturday in the middle of the summer, and an early morning run to the bookstore is one of the de rigeur moments of a Harry Potter publication summer. If you live in a city like New York what you do is you roll out of bed and buy the book, and then start reading it on the subway on the way back home, unless you start your reading in the store, waiting on line to pay. The Barnes & Noble near Rockefeller Center where I picked up my copy (I can't say I bought my copy, I still had $25.oo left in a gift card from Christmas) did not even give you the pleasure of in-store reading. All copies were kept stacked securely behind the cash registers, I suspect as anti-theft prevention. If you live in a small town, you probably pre-ordered the book from Amazon months ago, and hopefully your mailman remembered to deliver it on time.

The early morning hours of Saturday were busy in many, many ways. The die-hards lined up all over the world and earned their right to be the first ones to purchase the novel. Kids dressed up as witches and warlocks, donned Hogwarts robes, and mums and dads shelled out loads of "Galleons" -- albeit at 40% off just about everywhere in the civilized world. Boosktores from London to Buenos Aires to New York had become friendlier than usual places to engage in honest-to-goodness capitalist consumerism.

Meanwhile, in the lower recesses of the Internet ...

By the time that midnight Eastern Standard Time hit and millions of readers in the East Coast of the United States started their long night journey into day, the book had already been published in London for hours. When I visited the Internet Relay Channel "pottermania" to see what was going on, already five chapters of the book had been scanned, proofread by the various regulars of the channel, and posted on a newly-minted website just built for the ocassion. People on the East Coast were now joining the channel and offering their help to finish putting the whole thing up before dawn. Among the people in the channel, there was some banter about the differences between the American and the British version. But if truth be told, there was not too much chatter in the channel and, at the speed that the entire book made it online, one thing was certain: these people were definitely not reading! Over on Usenet, the Internet's favorite place to post, I marveled at the fact that the entire audiobook, as read by Jim Dale, was posted as 30 MP3 files -- one per chapter -- within hours of its publication by some guy who went by the name of "Eggnog." Cheers, buddy! Christmas came early this year!

Two years ago, when Harry Potter and the Order of the Phoenix was published I remember that I was not the only one in the subway car returning home trying to read and balance "Big Blue" with its imposing 870 pages. This Saturday, I did not see anyone else reading the new green novel when I sat down on the subway and opened my copy to page one. I think I know why: Everybody had already read it!

Posted by Vincent Vargas at 5:17 PM No comments: