The New Butterfly at the MET 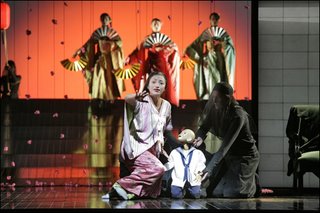 Madama Butterfly is the one opera that never fails to please, even when the cast is not ideal, the production questionable, and the orchestra not playing up to par. Last night at Peter Gelb's new Met Opera (from here on in this article, and in every one of my articles called the MET) none of the above was in order. The new production by Anthony Minghella, which opened the new Met season, and had already been seen recently at the English National Opera, is a memorable production that successfully updates the work without changing its locale, harming its intentions, or otherwise changing the intentions of its creators. The operas of Giacomo Puccini do not lend themselves to new interpretations as easily as the works of other composers. Tosca, for instance, one of the pivotal works of this composer, has to be staged as taking place in 1800, otherwise references to socio-political events that are alluded to in the libretto would not make sense if the locale and time is changed.

Anthony Minguella's staging is successful at conveying the delicacy of the story, as well as the fragility of the title character. The setting, with its mirror-like floors and over-head covering shows us a reflection of Japanese society (which is exactly what Puccini achieved in his Western melodies with hints of Japanese sounds) seen through the eyes of a European. The setting is decidedly Western in its look, but it successfully achieves a distant world. The mirrored surfaces of the stage allow us a distant look at the events. We are looking at two sides of the same issue, so to speak, though we are distant observants, depending, of course, on your seat in the house. From my seat in the rear orchestra (Row Z) I felt a little removed. I can't imagine this production from the Family Circle. It is definitely a production that was conceived for a smaller house: the London Coliseum where the ENO performs is perfect for this version of Butterfly.

The bunraku puppets that are used in the production are quite interesting, especially Sorrow, Butterfly's child. All you've heard about it is true: one forgets that it is a puppet and begins to think of it as a real child; and yes, the puppeteers do get an incredible response out of their creation. No child actor in my memory has ever given such a heart-breaking performance as this little puppet. Of course, most of what I heard from the very conservative crowd in the orchestra was negative when it came to the puppet. The one aspect that most members of the audience object to are the very visible puppeteers. A little reading about Bunraku theater traditions, and a little suspension of disbelief might solve the problems of these audience members.

Vocally, things were not that rosy last night. I found Cristina Gallardo Domas thin and wobbly in her interpretation of the title role. Her acting is first-rate, however, and she manages to convey the fragility of this Butterfly quite well. Marcello Giordani was a credible Pinkerton, so much so, that he was booed during his curtain calls, not for his singing, which at times sounded force, but for his great interpretation of a heartless Yankee vagabond. If the leads left something to be desired, the roles of Sharpless, Suzuki, and Goro were ably sung by Dwayne Croft, Maria Zifchak, and Greg Fedderly respectively.

The orchestra played well under Ascher Fisch, although I would have liked to have heard what James Levine did with the score on Opening Night. I will have to listen to my Sirius recording of the event to compare.

This production should be experienced for its visual beauty. That alone is worth the price of admission.
Posted by Vincent Vargas at 10:37 AM No comments: