McKellen & Stewart in Waiting for Godot 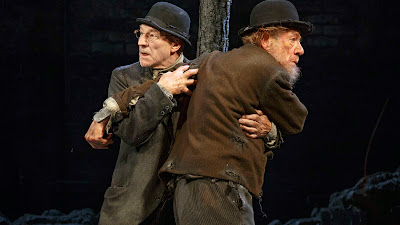 Waiting for Godot, Samuel Beckett's post-war absurdist play: bleak? Impenetrable? The abyss?  Not on your life!  This production, directed by Sean Mathias, resurrects the inherent comedy that was always present in the work (after all, the characters were inspired by the great clowns of the silent cinema), and it provides a felicitous vehicle for the genial comic talents of Ian McKellen and Patrick Stewart. Their Estragon and Vladimir could very well be two former vaudevillians, or more aptly two forgotten stars of British Music Hall, at the end of their rope, waiting for their next big break which will never come.

I would welcome a production of Godot staged under a dilapidated circus tent or the crumbling marquee of an abandoned theater, and Stephen Brimson Lewis's brilliant stage design for this production, featuring the bare back wall of the Cort Theater, and faux empty boxes at either side of the stage, certainly alludes to this. The audiences seem to have abandoned poor Didi and Gogo (where these their stage names?), and their unseen agent Godot is definitely not returning their phone calls.

Sir Ian and Sir Patrick are having a ball embodying these roles. Their chemistry onstage is infectious, and audiences are eating it up. As the more sprite and optimistic Vladimir, Mr. Stewart is a natural at comedy (which he so seldom has been asked to do, especially in his current film career) whether it be curiously inspecting the inside of his itchy hat (lice?), or picking up his heels and doing a little song and dance that welcomes audiences to the second half of the show. Mr. McKellen as the more downtrodden Estragon is heartbreaking at portraying the pathos of a poor soul who claims he gets beaten every night, and who often needs a hug, or to be lulled to sleep by his woeful partner. In the secondary roles, Shuler Hensley plays the blowhard, dominant Pozzo with a Southern accent, turning the role into a tyrannical Kentucky colonel of the old order. His slave, Lucky, portrayed by Billy Crudup, complete with white face, is quite good, his long meandering monologue, a masterpiece of absurdity which is played with a great deal of physical comedy.  Perhaps that's the best way to approach this moment in the play for modern audiences, because after many viewings and readings of the play, I still have no idea what he is talking about.

In recent interviews, Ian McKellen has hinted that this might be his swan song on the Great White Way. Therefore, you'd be crazy to miss his performance in this play, or his equally fine Spooner in  Harold Pinter's No Man's Land, currently playing with the same cast in repertory.  If this is the last time that Broadway will see this masterful actor, all I have to say is what a way to go!
Posted by Vincent Vargas at 7:22 PM No comments: