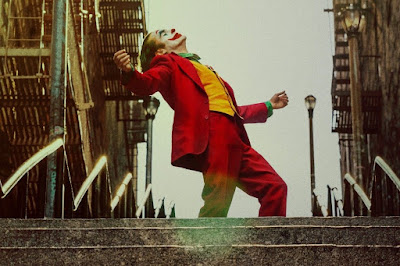 That the film Joker, the new Tod Phillips origin story of Batman’s most deranged arch villain, would incite violence in the streets of the real Gotham City and beyond proved to be much ado about nothing. There were armed guards with machine guns outside Alice Tully Hall at the New York Film Festival screening, but after weeks of playing around the country there have not been any serious acts of violence perpetrated as a result of watching this film. That, in and of itself, speaks volumes about this movie.

In 1971, Stanley Kubrick’s film A Clockwork Orange was banned in many countries as a preventative measure, fearing hordes of disaffected teenagers would go on bloody rampages mimicking the ultra-violence depicted in the film. But just for the record, let me state right now that Joker is no Orange.  Kubrick’s film, based on Anthony Burgess’s novel, is a frightening analysis of an out of control youth under an ineffective government in a UK steeped in a dystopia nightmare.  Joker is simply about raising to a pedestal a psychopath, and wallowing in the random violence he commits.

Joaquin Phoenix has been receiving praise for his performance, a character that brought posthumous Oscar honor to Heath Ledger, and which served as a campy vehicle for Cesar Romero in the 1960s Batman TV series. As a result of an uneven script by the director and Scott Silver, Joaquin Phoenix is allowed to be all over the place. Sure, you can’t take your eyes off him, but that’s because you don’t know what he’s going to pull next. This unexpected, mercurial approach to a troubled character worked really well for the actor in the film The Master, but again that was a tight controlled film where Phoenix could shine. Here he attempts a similar approach, and oftentimes his talent gets him over the hump, despite the material he is forced to work with. It yields an inconsistent performance where he can be tender when speaking to his mom, frightening when he looks into a mirror and whips his mouth into a deranged smile, and inexplicably campy when he is dancing on steps in the South Bronx, or when he is invited to a late night talk show whose host, ably played by Robert De Niro, is a veiled caricature of Johnny Carson.

I suppose the film works best as a recreation of 1970’s New York, but even here, it ends up being merely a Hollywood version of what New York was like in that decade. In other words, in the film the graffiti and the garbage in the streets is more abundant than it ever was in reality. For a real look at the Big Apple during that decade, shot on the very same mean streets, look to The French Connection and Taxi Driver, for starters, two films that Joker shamelessly tries to mimic. In its depiction of rioting crowds loose on the streets the film attempts to offer an allegory for our time of political discontent, and that it does real well. However, I wonder how many members of the audience will be thinking allegorically when presented with this gritty, violent material.