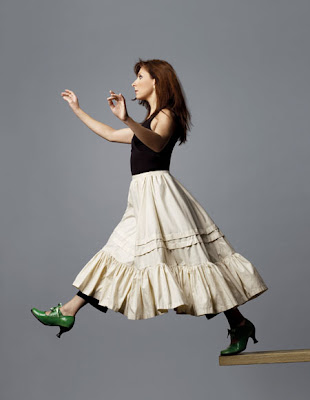 There is a very cute payoff at the end of Mary Zimmerman's new production of Vincenzo Bellini's La Sonnambula at The Metropolitan Opera that almost validates the director's conceit of transferring the action of the opera from an 1800's Swiss village to a modern rehearsal room where a contemporary opera company is putting together a production of this bel canto work.

Very much like the English National Opera's satiric production of The Mikado, where director Jonathan Miller stages Gilbert & Sullivan's work at a resort where British vacationers put on a show, Ms. Zimmerman's Sonnambula takes flights of fantasies with Bellini's work although her reason for doing so is somewhat cloudy. She is convinced that this opera is short on plot and needs a modern hand in order for it to work for modern audiences. La Sonnambula might be short on plot, but I'm not totally convinced that it works outside of its original setting. Dr. Miller's Mikado is successful because it is a biting satire on all things English, especially that yearning by the Victorians for exoticism that partially led to the creation of the work in the first place. Dr. Miller's production is a calculated satire of a satire. Ms. Zimmerman seems to conclude that Bellini's work, with its half-baked libretto and string of rapturous melodies, is as incomplete as the rehearsal of a stage work. Since Maria Callas first sang I Puritani at La Fenice, and revived the works of the bel canto composers, scores of creative artists have tried to make sure that these works remain fixed in the pantheon of great Italian operas. Ms Zimmerman's Regietheater staging of Sonnambula either does not respect Bellini's work enough, or respects it too much thinking that it can stand anything that you do to it. If the latter is her way of thinking, then that just shows that she does not know enough about this composer. Bellini is not Wagner. Bend Bellini enough and he will break. This production gets dangerously close to that.

On the musical front, everything is in good hands. Natalie Dessay's Amina is a sprite, lithe creation packing a powerhouse coloratura that rivals anyone else singing the role today. Likewise, Juan Diego Flórez sounded secure throughout the evening, although I find that his voice is getting tighter at the top these days. Still, the encore pairing of these two, after last year's phenomenal La Fille du Régiment proves that the MET knows they have a gold mine whenever these two singers appear together. Michele Pertusi proved to be a sonorous Count Rodolfo and Jennifer Black was a cute Lisa. Conductor Evelino Pidò accompanied the singer's with true bel canto style getting some sumptuous sounds out of the Met Orchestra. Some exposed french horn passages, a favorite Bellini instrument, sounded quite beautiful and effortless.

Throughout the evening in a corner of the rehearsal room that serves as the only set, there is a model of the finished La Sonnambula production that these actors are rehearsing. It is a lighted model inside of a miniature proscenium stage that sits atop a platform. I wanted so much for the cast to be miniaturized and be transported inside that little stage -- and me right along with them.
Posted by Vincent Vargas at 11:14 PM 2 comments: