Mark Rylance Does it Again! 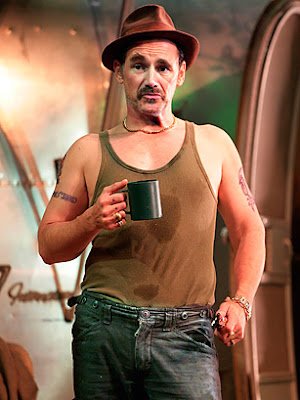 Mark Rylance won the Tony in the Best Performance by a Leading Actor in a Play category for his monumental performance in the play Jerusalem. Back in 2008 Rylance won the Tony for his Broadway debut in the play Boeing-Boeing. As you may remember, his acceptance speech a few years ago confused many. It consisted of reciting from memory the poem "The Back Country" by poet Louis Jenkins. Tonight, Mr. Rylance went back to Mr. Jenkins's poetry for his second Tony acceptance speech. Here it is.

"Walking through a Wall" by Louis Jenkins

"Unlike flying or astral projection, walking through walls is a totally earth-related craft, but a lot more interesting than pot making or driftwood lamps. I got started at a picnic up in Bowstring in the northern part of the state. A fellow walked through a brick wall right there in the park. I said, "Say, I want to try that." Stone walls are best, then brick and wood. Wooden walls with fiberglass insulation and steel doors aren't so good. They won't hurt you. If your wall walking is done properly, both you and the wall are left intact. It is just that they aren't pleasant somehow. The worst things are wire fences, maybe it's the molecular structure of the alloy or just the amount of give in a fence, I don't know, but I've torn my jacket and lost my hat in a lot of fences. The best approach to a wall is, first, two hands placed flat against the surface; it's a matter of concentration and just the right pressure. You will feel the dry, cool inner wall with your fingers, then there is a moment of total darkness before you step through on the other side."
Posted by Vincent Vargas at 10:00 PM No comments: