Die Walküre at the MET -- Been There, Done That 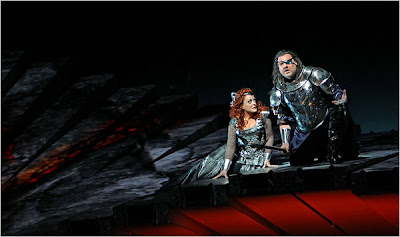 The title of this review does not refer to me having made the trip to Richard Wagner's Valhalla and having successfully returned, but rather it is a personal commentary on the on-going unveiling of the new Ring production at the Metropolitan Opera by director Robert Lepage and his associates from his production company Ex Machina. Unfortunately, they only seem to be interested in turning Wagner's great work into a well-oiled machine. On Friday they unveiled their new production of Die Walküre with some mixed results.

Back in the fall, they opened the 2010-2011 season with Das Rheingold, and opening night introduced us to the 24 movable planks that make up the set for the four-evening work. Rheingold proved to be a mixture of imaginative staging and magnificent projections featuring characters who often seemed to defy all laws of gravity. Still, despite some amazing stage magic, there were some kinks left in the machine, and opening night did not see the gods parade into Valhalla via a rainbow bridge that never materialized. Instead, the gods had to exit stage left through the wings. The conclusion of Rheingold brought a mixture of applause and boos, the latter mostly directed, I'm convinced, at Lepage and company.

Now it is Die Walküre's turn to be "machined." No sooner did James Levine (looking thin and frail) give the orchestra the opening downbeat, the machine started to move, showing us a snowstorm, then turning itself into a forest and then into a rather sparse, almost modernistic Hunding's hut. During Siegmund's monologue, shadowy projections illustrated his tale of woe -- a nice cinematic touch, but the truth of the matter is that Wagner's music illustrates the action rather well without the need for a magic lantern show. When Spring bursts into the room and Siegmund (Jonas Kaufmann in marvelous voice) sang his "Winterstürme" the lights turned green, the machine moved a little more (not too quietly) , and that's it! Anyone who wanted the set to perform wonders during this act could not help but yawn.

Then came Act II. That's when the audience finds out that this set is really dangerous. Bryn Terfel as Wotan stepped out into the planks of the set, the slope of which would make any ordinary mortal slide down. He managed to stay up there during the night, don't ask me how. Unfortunately Deborah Voigt was not as nimble: she took a tumble as she tried to step up to the planks right before her "Hojotohos." Luckily she managed to laugh it off and she got through the difficult musical passage without a problem. I am sure, she was shaken, though, and you could hear the audience gasp as she went down. I really don't see the need to put singing actors through this. Stephanie Blythe had it the best. As Fricka, the "goddess who must be obeyed" she never had to step into the planks. She sat in her regal throne, holding on for dear life as the platform where she sat slid down into place. Of course, let's just hope that the wires that hold her securely never break, otherwise we could very well have another Wagnerian incident like the one that happened a few years ago when Tristan barreled down, head first, into the prompter's box.

Act III offered an imaginative use of the machine for the "Ride of the Valkyries", but the effect verged on the kitschy as proven by the lusty reaction of the audience. I predict that every time they mount this production this celebrated portion of the score will cause some kind of inappropriate reaction. The opera finished with the most impressive use of the machine: an aerial shot of Brünnhilde as she sleeps among the flames. A nice effect, although it never quite takes your breath away.

The most wondrous aspect of the evening was the orchestra. Under Levine's direction they were a noble extension of his musical concept of this work. There was faultless playing throughout the evening, and memorable sounds coming from the bass and horn sections. Onstage, all of the singers, with the exception of Eva-Maria Westbroek (Sieglinde), who had to be replaced after Act II, sounded vocally secure. Mr Kaufmann is proving that he can become one of the great heldentenors of our times. Last summer at Bayreuth he wowed audiences in the title role of Lohengrin, and now his Siegmund is igniting the first two acts. Stephanie Blythe was simply amazing, arguably the strongest and the most interesting voice of the evening. Bryn Terfel's Wotan is a force of nature, the Welsh bass-baritone continues to transform himself into one of our best commanding Wagnerians. His hefty tones may not have the majesty of singers of the past, like George London or Hans Hotter, but his musicianship and his perfectly clear diction add a layer of nobility to his performance. Deborah Voigt impressed me with her first Brünnhilde, although I will argue that this may not be the role for her. Still, she had a very good night, and hopefully her voice will hold as the Ring cycle continues into next year.

Overall, I found the production lacking imagination, especially after whetting our appetite with the worlds created in Das Rheingold. True, Walküre is a more earth-bound story, but if you have a high-tech multi-million dollar gadget in front of you, it better perform some amazing out of this world tricks. Wagner did it with his music, I can't see why Lepage and company can't match it.
Posted by Vincent Vargas at 2:30 PM No comments: