Anna Netrebko stars as TOSCA at the MET

It takes a ballsy opera singer to take on Giacomo Puccini's great opera Tosca. Even more, it takes a truly fearless Prima-Donna to take on this role for the first time at the Metropolitan Opera, arguably the center of the opera world, and the focus of much of the international press. But that is exactly what soprano sensation Anna Netrebko has done this spring at the MET. By jumping into the role of the tempestuous opera singer in love with a revolutionary artist in the dark, political days of 1800 Rome, she had proven once more that there may be a lot of opera singers out there, but currently she is the great diva of our times. On Thursday night, the MET was nearly sold out (something that should happen more often, but it does not, regrettably), and there must have been at least half a baker's dozen of Russian oligarchs in attendance as Ms. Netrebko sang an incredible performance of this work, putting herself on the map with the Tebaldis and Callases, among others, that made this work a staple of their repertory at the MET.

The focus of this production in the press this year was the falling out of the original cast that included Jonas Kaufmann and Bryn Terfel, along with the original soprano, Kristine Opolais, and her husband, the conductor Andris Nelsons. In other words, the major players of the cast. The MET had to scramble to replace everyone, but not before they had to replace James Levine, who after Mr. Nelsons left was selected to lead the orchestra, and then the sexual allegations hit, and Levine was out of the picture. Perhaps the only mention of his name in the precincts of the MET currently is on the CD's, DVD's and Blu-Rays in the MET opera shop of past productions he conducted. The MET is not getting rid of those potential sources of income! They won't have him around, but will make money out of his name and product. Interesting, isn't it?  No wonder the maestro is suing the Metropolitan Opera.  It's messy at the management level these days.

But thankfully, the art is not suffering, or at least, it does not appear to do so. Thursday's performance was quite strong, although uneven. At the helm was maestro Bertrand de Billy who lead a secure reading of Puccini's score. Netrebko's Cavaradossi was her husband Yusif Eyvasov, whose voice is not the most pleasant of instruments. Tight throughout his range, and lacking any real pianissimo, he manages to produce real high notes that are secure and quite stunning to hear. The journey there, however, can be a rocky one. Perhaps the best singing belonged to Michael Volle, whose dark Wagnerian baritone was perfect for Baron Scarpia's brand of treachery. I saw Mr. Volle last summer at the Bayreuth Festival as Hans Sachs (a role which he will repeat this year at the Green Hill), and I am glad to report that the Italian side of his repertory is as secure as his German one.

Sir David McVicar's new production, of course replaces Luc Bondy's awful staging which dethroned Franco Zeffirelli's much loved production. You remember?  It was the one where Scarpia gropes the Virgin Mary at the end of the Te Deum, and where he gets fellated by a couple of prostitutes on an expensive couch in Act Two!  No wonder there were boos on the 2009 opening night from the largely conservative New York audience. The present production is what I would call Zefirrelli light.  The three main sets certainly resemble their real Roman locations, and there is a mighty angel atop Castel Sant'Angelo. It's what New York opera lovers want to see, and Peter Gelb, the MET's general manager has admitted that this return to conservatism has taught him not to mess with the warhorses. Perhaps leave experimentation to new works (The Exterminating Angel, perhaps).

The opera season is rapidly coming to an end, but do not miss this production of Tosca with this cast. It was probably one of the best evenings at the MET this year.
Posted by Vincent Vargas at 11:45 AM No comments: 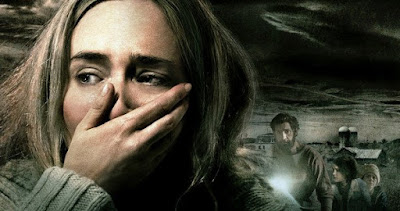 It's great that A Quiet Place has become the latest horror film sensation. Directed and starring John Krasinski and his wife Emily Blunt, the movie takes us to a near future where the majority of the people of Earth have been wiped out by blind alien creatures with hypersensitive hearing. They play a husband and wife trying to survive in a farm, along with their two children. One of their children was killed by one of the creatures as a result of a noisy, battery operated toy that attracted one of the monsters. The family has been able to survive for an additional year communicating with one another through sign language. But the future looks dismal for them. The wife is pregnant.  How is she going to give birth without making a sound? And, of course, how is the newborn baby going to come into what's left of the world, and not cry? The premise presents a nightmare that they may not be able to survive, and this makes for a fantastic horror film that keeps us on the edge of our seats, and makes us chew our popcorn as quietly as possible. It's like watching a well-crafted silent movie, and undoubtedly the quietest film ever produced by Michael Bay.

The film fits today's concept of smart horror. It has a unique monster, unique horror situations, characters that make intelligent decisions, and definite franchise potential. Although, I wish that they would leave it alone, and not turn it into a Blumhouse style series. Rarely has there been a film where you could hear a pin drop in the theater. So distant from DC and Marvel, and their ear-splitting Dolbyized worlds.

When conductor Sir Georg Solti visited the Metropolitan Opera with a Paris Opera production of Mozart's The Marriage of Figaro, he held down the sound of the orchestra and the singers. With the sound low, the audience at the MET started leaning in to hear every word and listen to every note. As a director, Mr. Krasinski does the same thing with this film. The lower the sound level, the closer we move to the edge of our seats. The fact that he manages to maintain us in this position for a fast moving 95 minutes is the utter success of this fine film.
Posted by Vincent Vargas at 3:35 PM 1 comment:

CASABLANCA to be shown on TCM 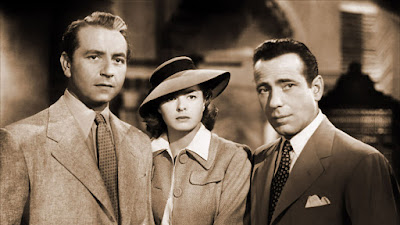 The film CASABLANCA will be shown on TCM tomorrow, Wednesday at 8:00pm EST. For more information about this classic movie go to my website Vincent's CASABLANCA HomePage. If you miss it, which you shouldn't, you can always catch it on Watch TCM, a service where you can stream films from the TCM vaults.
Posted by Vincent Vargas at 4:43 PM No comments: 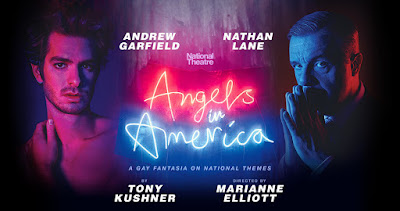 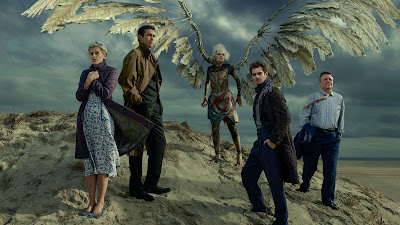 It is not often that a modern masterpiece gets revived on Broadway, and with such an incredible cast. The commercial theater, unfortunately, is not always the place where you will find intelligence and great ideas. The way to see the work is to invest eight hours and see both parts. The play will challenge you in so many ways. But ask yourself, when was the last time you attended something on Broadway that made you think? Don't pass up this rare chance to see first-rate theater with an incredible cast.
Posted by Vincent Vargas at 10:26 AM No comments: