New BARBER OF SEVILLE at the MET 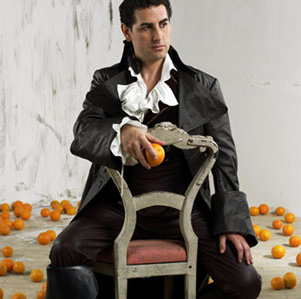 I am not sure if The Metropolitan Opera needed a new production of Il Barbiere di Siviglia, but the new Peter Gelb administration has brought a new one in via Bartlett Sher, the director of last year's Tony award-winning musical The Light in the Piazza. The cast of this new production of Rossini's sunny comedy features Juan Diego Flórez as Count Almaviva, and by the manner by which it is being advertised, with the young Peruvian tenor's handsome likeness all over the place, this popular young artist is the reason why this production is being mounted. Also in the cast are John Del Carlo as Dr. Bartolo, veteran Samuel Ramey as Don Basilio, the fabulous Diana Damrau as Rosina, and Swedish sensation Peter Mattei as Figaro. In the pit, conductor Maurizio Benini keeps things moving briskly, and makes the pint-sized orchestra sound bigger than it really is.

It is almost impossible these days for a new production of a favorite opera to avoid the throes of controversy. Wagner fans have dealt with, and also delighted in this trend for decades. In the past few years the age of the director has arrived in the Italian repertory, and in the recent past unusual productions of Italian warhorses (The Ana Netrebko, Rolando Villazón La Traviata in Salzburg, and the Robert Wilson's Aida ) have stretched the boundaries of Italian opera staging. This new MET production is certainly the most abstract that New York audiences have seen. The set consists mostly of multiple doors which are wielded about on stage to form geometrically pleasing patterns, and to convey the sense of claustrophobia and imprisonment. Orange trees, a staple of Seville's landscape, are also everywhere, adding a genuine touch to the setting.

The most controversial aspect of Mr. Sher's production is an extension to the stage built past the orchestra -- a passerelle, if you will -- which thrusts the entire action forward, and also manages to do some tricky unexpected turns with the sound of the human voice and the orchestra. Acoustically, the MET was designed for voices to be contained within the proscenium of the theater, and making unmiked singers perform well beyond the safe confines of the stage (and behind the conductor) reduces the sound of their voices. When they step around the orchestra to the passerelle they might be closer to the audience, but they sound miles away. The orchestra also ends up sounding muffled and confined. These directorial tricks are fine on a Broadway stage where both performers and orchestra are miked, but it does not help the natural sounds of an opera house.

Also, can anybody tell me why at the end of Act I a gigantic anvil (the kind that the Coyote would purchase from Acme to catch the Roadrunner) comes down and crushes a wagon full of pumpkins?

I would say that if Mr. Sher does away with Warner Brother's cartoon tricks and liberates the MET's acoustics once again, we might have a production of Barber worthy of Mr. Gelb's vision of the new Metropolitan.