Watch the new Meistersinger from The Salzburg Festival 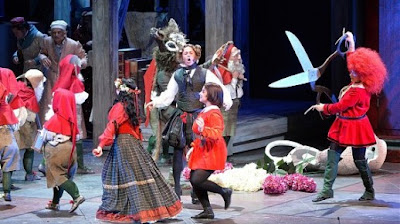 The charming and imaginative new Stefan Herheim production of Richard Wagner's Die Meistersinger von Nürnberg, conducted by Daniele Gatti, which premiered at the Salzburg Festival last Friday, and which is coming in the future to the Metropolitan Opera is currently streaming on 3sat.com. If you have problem viewing it, change the Format (found below the image) to Mpg4/h264.
Posted by Vincent Vargas at 11:36 AM No comments: 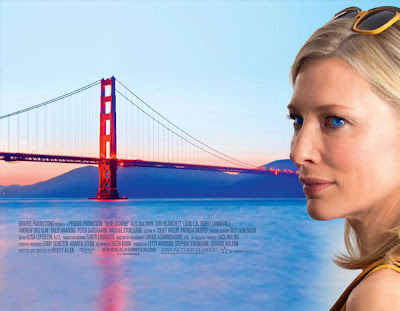 It is good news to see Woody Allen at the top of his game once again with his latest film Blue Jasmine. This weekend, it was very rewarding to see lines around the corner in Manhattan, and theaters filled with intelligent audiences. Not to see the latest summer blockbuster, where a non-human soars through the skies, cities get needlessly destroyed, and dialogue consists of expletives and monosyllabic words. These are audiences that remember Allen's golden age, which started in 1977 with the release of Annie Hall, and continued with a string of hits that included Manhattan and Broadway Danny Rose.

Blue Jasmine creates a summertime cinematic world where superheroes are superfluous, if not downright ridiculous. The film reminds us that the human heart has enough emotion and action, as well as the ability to commit violent and treacherous acts. Who needs a damaged alien with a tight-fitting suit, who can't stay still, and who doesn't shed a tear when thousands perish as buildings topple? Isn't it more cinematic to explore the damaged souls of real human beings?

Elitist cinema? You bet! As elitist as Jean Renoir, Federico Fellini, or Ingmar Bergman, to name a few of the master filmmakers that Mr. Allen adores. Besides, there has always been a strong streak of elitism about Mr. Allen (and the audiences that flock to his films!) once he discovered the WASPs and Jews of the Upper East Side, Elaine's (the now closed legendary restaurant where New York's literati hung out, and where Woody always had table 8, close to William Styron at table 4), and once he moved from Brooklyn to his new home on Fifth Avenue. His films have always been a clear mirror image of his life, and Blue Jasmine finds him once again in his very familiar territory where he can dissect the problems of modern social class.

To enter into detail about this film is to rob the viewer of the element of discovery. Suffice it to disclose that in a screenplay that riffs on Tennessee Williams's A Streetcar Named Desire, a wondrous Cate Blanchett, bound for a Best Leading Actress nomination and Oscar for sure, plays Jasmine, a modern day Blanche DuBois, the former Park Avenue wife of Wall Street player Hal (Alec Baldwin) who, like Bernie Madoff, has gone to jail for one too many crooked deals. Like the Southern belle in Williams's drama, Jasmine arrives in San Francisco, broke, and carrying the only possessions she has left: expensive couture clothing inside her Louis Vuitton luggage set. She has gone to her sister's house to start all over again. Ginger (played by the amazing Sally Hawkins) is a single mom with two kids by her former husband (a surprisingly effective Andrew Dice Clay) and is now in a relationship with a Stanley Kowalski type (a memorable Bobby Cannavale). Jasmine, once accustomed to summering in the Hamptons, and who has now hit the skids immediately falls into conflict with the lower middle class characters she meets through her sister Ginger. Her only escape is to down xanax with vodka chasers, and her only hope is Dwight (Peter Sarsgaard) an up-and-coming yuppie she meets at a party who works in the State Department, and who has ambitions of entering California politics.

It is a wondrous film, beautifully written and directed, and shot on film by Spanish cinematographer Javier Aguirresarobe, the brilliant D.P. who provided the creepy images in the Spanish horror film The Others, and who previously worked with Mr. Allen on Vicky Cristina Barcelona. In this film, he shoots the flashback New York interior scenes of wealthy spaces with warm, radiant hues, while the vistas and indoors of San Francisco get a freer, more European approach.

Finally, the title of the film reminds us of the "blue piano" that Tennessee Williams mentions multiple times in the stage directions of his play. The film moves along to the tune of Mr. Allen's favorite jazz recordings. Classic performances by Lizzie Miles, King Oliver and Louis Armstrong are heard alongside contemporary jazz artists like Conal Fowkes.

Don't miss what will end up being one of the most important films of 2013.
Posted by Vincent Vargas at 3:13 PM No comments:


Here are only mere seconds of the 10 minute Bayreuth "standing boovation" that greeted Frank Castorf and his production team after the conclusion of Richard Wagner's Götterdämmerung, on Wednesday afternoon at the Bayreuth Festspielhaus. According to published reports (and as you can see in the video) Castorf, his hands folded, refused to leave the stage and allow conductor Kirill Petrenko and the entire Bayreuth Orchestra to take their collective bow. Since Castorf and company were not leaving the stage, they opened the curtain behind them, revealing a sea of musicians carrying their instruments. This is a Bayreuth tradition, and the only way that an appreciative audience can applaud the orchestra. At Bayreuth the musicians and the conductor are out of sight, inside a pit, under the stage. When the members of the audience saw the musicians onstage they burst into applause. It was reported that Frank Castorf, like a leach, remained onstage taking in the ovation as if it was directed towards him.
Posted by Vincent Vargas at 5:35 PM No comments: