ATTILA: Verdi, Muti, and Prada at the MET 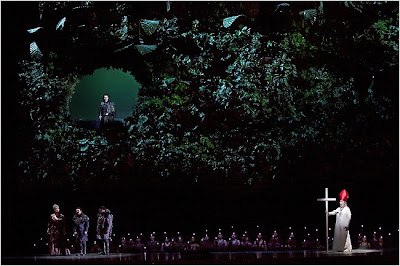 For Peter Gelb the new production of Giuseppe Verdi's Attila might just be the pinnacle of his tenure thus far at the MET. It is a star-studded event on many levels, with all kinds of debuts that spell the kind of success that most opera houses dream of. At the helm, leading the MET orchestra for the first time, is Riccardo Muti, perhaps the greatest Verdi specialist of our times leading an early Verdi opera never before heard at the house. Also making debuts are visionary director Pierre Audi, costume designer Miuccia Prada (that's right, an opera with Prada gear!) and the architectural firm of Herzog & de Meuron, who have given us London's Tate Modern and Beijing's "Bird Nest" Olympic Stadium, in charge of the sets. Onstage, Russian bass Ildar Abdrazakov in the title role, soprano Violetta Urmana, tenor Ramón Vargas, and veteran bass Samuel Ramey (himself a legendary Attila). On paper this is a dream team, at the house it is a revelation!

Attila occupies an unusual space in Verdi's canon; one that is also shared by the opera Stiffelio, both works heard at the MET this season. These two "minor" works come just before better known works by the composer. Attila is Verdi's ninth opera coming right before his early masterpiece Macbeth, and Stiffelio was written right before the legenday trio of Rigoletto, Il Trovatore, and La Traviata. Given the chronological spaces that these works occupy, it is easy to see why they have been eclipsed by the composer's more popular, more mature works. But make no mistake about it: Attila, which presents the life of the Scourge of God as a melodic pageant of early Italian history written for a Venetian audience of 1846, might be weak in its libretto, but the music already shows a master of Bel Canto who is slowly discovering his personal musical language and paving his own way for the masterpieces that he would soon create in the decade of the 1850s.

Riccardo Muti drew inspiring playing from the MET orchestra, the likes of which I have not heard at the house in quite a long time. It was so exciting to hear the expansive richness of sound that this ensemble is able to produce under the right hands. Muti was in complete control throughout the evening, leading the orchestra through memorable textures and rich sonorities. The subtleties of the score came through as well as the impressive fortissimo tuttis (one of which made one member in the audience Saturday evening burst out in enraptured applause).

In many interviews, Muti has declared that his personal aim in this production is to show how Attila already contains the kernel that makes the mature works great. Needless to say, he has succeeded in this endeavor. He gives the reading of Attila the same respect and attention to detail as if he were conducting Otello or Falstaff, and that's the secret to making these early Verdi operas work musically for today's audiences.

Pierre Audi's production tackles the problem of presenting an operatic fresco from 1846 by instilling a modern look. The battlefield of Aquileia is an impressive mount of rubble that gives you the feeling that if you take away a stone the whole thing would tumble down. The rest of the opera is played in front of an impressive wall of foliage, complete with giant leaves and impressive tree trunks worthy of the best scenes in James Cameron's Avatar. Thankfully, the costumes by Ms Prada do not channel the Na'Vi, but are nonetheless tres chic and quite elegant. The Act II banquet scene, in particular, stands out for its impressive use of golden yellows.

The cast assembled for this production is first rate. Ildar Abdrazakov may not be a powerhouse Attila, but his attractive bass is lyrical and easily reaches the low notes required for the role. His good looks brings incredible charisma and stage presence to the title role. Violetta Urmana started out a bit shrilly, but it took her no time at all to bring down the house displaying Odabella's beautiful but difficult coloratura. Giovanni Meoni, filling in for Carlos Alvarez, brought tender and expressive singing of great beauty to the baritone role of Ezio. Ramón Vargas looked uncomfortable in his costume, and the music seemed to overwhelm his light tenor for most of the evening. His third act aria "Che non avrebbe il misero" however, was sung expressively in true Verdi fashion. Samuel Ramey made a memorable cameo in the role of Leone a Roman bishop.

It is good to see Riccardo Muti make his long overdue Metropolitan Opera debut. He is unquestionably the reason for much of the spark and magic of this production. My first thoughts after the last echo of the resounding ovation was over was that New Yorkers deserve to hear him again in the opera house: perhaps next time leading one of the more beloved warhorses of Giuseppe Verdi's oeuvre. Are you reading this Mr. Gelb?