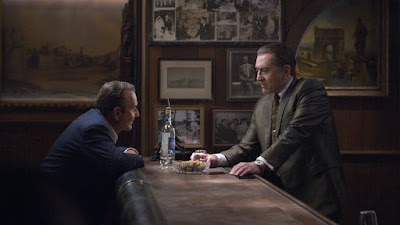 Martin Scorsese's film career has been graced by landmarks of greatness: Mean Streets (1973), Taxi Driver (1976), Raging Bull (1980), and Goodfellas (1990) among many, many others. Most recently he has turned his gifts towards a wider canvas: The Departed (2006) -- in my opinion an uneven film where I felt Scorsese was out of his element. Still, that film was the one that got him his Oscar for Best Director. A few years ago The Wolf of Wall Street (2013) made an incredible showpiece for Leonardo DiCaprio, an actor who lately had become his latest muse. These films serve as signposts that lead the way to his present masterpiece: a movie where he has reunited with some of his former muses.

The Irishman is a sprawling, lengthy film, clocking in at 209 minutes, where the director once again brings to life the familiar world of organized crime and populates it with some of his regulars. In its approach it feels like Scorsese's personal apotheosis of a genre he has kept alive for decades. We have Robert De Niro, who plays Frank Sheeran, whose nickname is the Irishman, a career mob hitman. Harvey Keitel in a small but important cameo role as a mob boss, and Joe Pesci, whose performance is a revelatory study in subtlety, and a 360 degree turn for this actor who came out of retirement to play this role. To these Scorsese regulars, the director has added Al Pacino, with whom he had never worked before. Pacino plays Jimmy Hoffa, the labor leader who disappeared in 1975, and who was presumably executed by the mob. Pacino's performance might seem a bit large compared with the subtlety of the other principals, but this is in keeping with the bigger-than-life character Hoffa created for his public persona, and which was embraced by his Teamster brothers.

In the hands of the director and his gifted cinematographer Rodrigo Prieto, The Irishman becomes a rumination on organized crime, and a personal study of a lifetime creating films in this inimitable genre. With muted colors, and a dark palette, the film is about the end of something. It's the Omega of the Scorsese mob movie, populated with the kind of cast that could probably not be possible to assemble again. If Goodfellas, with its bright sunny colors and upbeat rhythms, was his career's Alpha, then the somber but brilliant Irishman is its logical twilight.

In featured parts there are great performances by Bobby Cannavale, Ray Romano, and Sebastian Maniscalco as mobster Joe Gallo, whose murder in Little Italy's Umberto's Clam House is carefully recreated. In a very small role Anna Paquin is unforgettable as Sheeran's daughter, a woman who learns about the kind of work her father does, and eventually wants nothing to do with him. Her recognition scene is poignant despite its subtle, minimalist approach.

The Irishman had its world debut this weekend at the New York Film Festival, and will have a limited theatrical run before it can be streamed on Netflix. According to Wikipedia "The film will not play at the theaters owned by AMC, Cinemark, Regal, or Cineplex because the "four week progression to SVOD remains unacceptable to those chains." It was previously reported in February 2019 that Netflix would possibly give the film a wide theatrical release, at the request of Scorsese. The heads of several theater chains, including AMC refused to play Roma the previous November, said they would only be open to playing The Irishman if Netflix respects the decades old theatrical window, that suggests that movies come to theaters first for a couple of months, and then go to the home."

The way to see The Irishman is in a theater, preferably one that's full with movie lovers, so make every effort to do so despite the lack of places that might show it.
Posted by Vincent Vargas at 3:29 AM No comments: