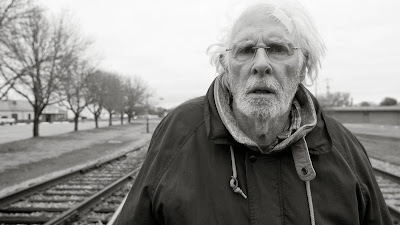 Nebraska is Alexander Payne's new film: a rumination on old age, the heartbrake of unfulfilled dreams, the eternal struggle between fathers and sons, and the death of America's heartland during the current economic crisis. Shot on black-and-white film by Phedon Papamichael, the texture of the images are reminiscent of the great photographs of Walker Evans and Dorothea Lange of the Great Depression, and Gregg Toland's cinematography on John Ford's great film The Grapes of Wrath.

The story centers on the complex relationship between a father and son. Woody, (Bruce Dern) is an alcoholic octogenarian, who is rapidly losing touch with reality, and who wants to travel from his home in Billings, Montana to Lincoln, Nebraska to collect the million dollars that he thinks he's won in a bogus sweepstakes. His son, David (Will Forte), a stereo and TV salesman who has just split up with his live-in girlfriend, agrees to drive him there, even though he knows fully well that there will be no money waiting for him at the end of their journey. Rounding out the other main characters in this road film are Woody's shrewish wife Kate (June Squibb) and Ross (Bob Odenkirk), Woody's more successful older son who is an up-and-coming TV anchorman. When the journey takes us to Woody and Kate's rural town where they grew up, we also meet Ed Pegram (Stacy Keach), Woody's ex-business partner who does not wait long before he threatens Woody and the family claiming that the old man owes him ten grand.

Despite the serious issues of unemployment, economic failure, and old age that the film raises, Bob Nelson's screenplay is rich and plentiful with dark comedic scenes that verge on the absurd, coupled with brilliant dialogue that elevates the script to the level of art. Woody and his son hopelessly looking for dad's teeth on the railroad tracks is pure Samuel Beckett, while their dialogue during this scene, in which both take their turn at dismissing that the teeth they found are not the right teeth, is pure Golden-Age Hollywood.

Alexander Payne has once again cast his film perfectly. Bruce Dern is wonderfully memorable as Woody, a grizzled, whispy-haired lumbering, but fragile man; his face a map showing a lifetime of sacrifice and missed opportunities. June Squibb, an actress who has made a career playing mothers and aunts, and who played Helen Schmidt in Payne's 2002 About Schmidt, is a force of shrewish nature as Woody's loud but lovable wife: an old lady who clearly has happily misplaced her super-ego somewhere far, and who wants to ship Woody to a nursing home. Sons Will Forte and Bob Odenkirk start out in Cain and Abel mode until circumstances turn them into bumbling conspirators in a hilarious sequence regarding an old air compressor.

One of the best films of the year, Nebraska is destined for loads of prizes and awards, and it is not to be missed.
Posted by Vincent Vargas at 11:11 AM 1 comment: 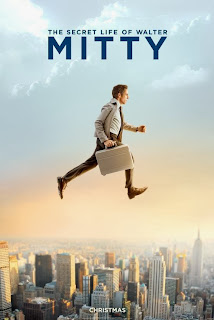 Walter Mitty started life as the "hero" of a short story by James Thurber that first appeared in the pages of The New Yorker magazine on March 18, 1939. This short tale of a man, who lives a mundane life and only seems to come alive inside his heroic daydreams, was the perfect antidote for a country coming out of an economic depression, and on the verge of a second World War. In 1944 the short story was adapted as a radio play with Robert Benchley playing the daydreaming Mitty, while in 1947 independent film producer Samuel Goldwyn adapted the story into a lavish Technicolor film, shaping the narrative to suit the comic talents of actor Danny Kaye.

This new film, The Secret Life of Walter Mitty, produced by the son and grandson of Samuel Goldwyn, is a vanity project directed and starring Ben Stiller. In this new take on the story, written by Steven Conrad, Walter is a bachelor, taking care of his aging mom (Shirley MacLaine). Some of the first shots of the film reveal Walter sitting at his computer, and looking at the ever decreasing funds on his checkbook after setting up his mom in an old-age home. He lives alone in the Upper West Side, and is having technical problems sending a wink on eHarmony to a co-worker he is interested in, played by Kristen Wiig. Both of them work midtown at Life magazine, which is soon to shut down and join the list of venerable publications reduced to an Internet dot com. Walter Mitty, who works in the bowels of the Time-Life building, as a "negative asset manager" misplaces a negative that had been sent to the magazine's office by famed but enigmatic photographer Sean O'Connell (Sean Penn), and in order to impress the girl he loves he sets on a quest to find the famed shutterbug: a journey that takes him from barren Greenland, to an erupting volcano in Iceland, to the mountains of Afghanistan. It also takes him out of his dreams, and into reality.

Before long, Walter changes into the man of his imagination (he becomes a kind of a cartoon character). Conrad's script changes the original intent of the Thurber story as the title character goes from a mensch lost in his daydreams to a valiant doer who, in a schmaltzy conclusion, gets the girl, as befits any hero. And it's not a daydream anymore: it's for real! Had Stiller concluded his film giving the audience a hint that Walter has not progressed out of his reveries, and that we are once again stuck in another fantasy, the film would have been more interesting. However, Stiller is not out to make a depressing film about a daydreamer, but about a man who can overcome all of that and get the girl. The film is punctuated by rock songs that point to this theme. Curiously, David Bowie's great "Space Oddity," a song about an astronaut who becomes marooned in space, is spun as the story of a man of great courage overcoming great odds and "going into the unknown."

Unfortunately, The Secret Life of Walter Mitty chooses to forgo the unknown, and tread on familiar ground. As a result, it stays earthbound and revels in its schmaltzy feel-good universe.
Posted by Vincent Vargas at 9:11 AM No comments: