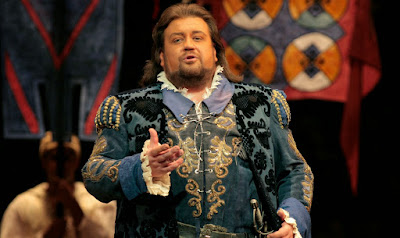 It is sad to report that tenor Johan Botha, the South African superstar that thrilled audiences around the world with his performances of Richard Wagner's toughest roles, died today at the age of 51. Mr. Botha was a mainstay of the great opera houses around the world. I was fortunate to see him perform the major Wagner roles as well as the title role in Giuseppe Verdi's Otello: one of the hardest roles in the Italian repertory.

Mr. Botha started his career in the chorus of the Bayreuth Festival. Twenty years later he would be acclaimed in the role of Siegmund in Die Walküre at that same theater.

Here he is in the role of Walther von Stolzing singing "Morgenlich leuchtend" from Die Meistersinger von Nürnberg.


I last saw him at the Metropolitan Opera singing the title role in Tannhäuser, a performance that the New York Times described as that of a man who "bristled with the desperate intensity of a man who’d been to hell and back — and lived to tell the tale."
Posted by Vincent Vargas at 9:24 PM No comments: