The Metropolitan Opera is not a European Festival, and yet Peter Gelb continues to treat the New York institution like one. He has convinced himself that audiences, especially young audiences, will flock to Lincoln Center if presented with Regietheatre stagings of some of opera's warhorses. The best example of this thinking is Luc Bondy's 2009 maligned staging of Tosca which replaced the much beloved Franco Zeffirelli production. Next season, this production will be scrapped (after only five years) and a new David McVicar staging will replace it. This new production promises to take the action back to recreations of the original Roman locales, as specified in the libretto, and which the MET is touting in their 2017-2018 subscription brochure as "ravishing," and "rivaling the splendor of Franco Zeffirelli's set and costumes of the Napoleonic era."

Now, as the current season comes to an end, the MET has once again taken a chance with another old, ravishing production from the days when voices ruled the stage and directors actually followed the stage directions. The 1969 Robert O'Hearn production of Der Rosenkavalier has been replaced with a new production by director Robert Carsen. The old production was faithful to Hugo von Hoffmansthal's setting of the opera during the reign of Empress Maria Theresa. This new Carsen production updates the action to 1911, the year in which the opera received its successful Dresden debut, on the eve of the Great War.

Robert Carsen must have been coached by Peter Gelb about New York's tastes, because this staging's Regietheatre sneaks up on you. The first act, with its sumptuous red rich fabrics bring up the years of the Vienna Secession faithfully. Act I was so satisfying, that it left me wondering why the production team was booed a few days ago at the premiere. The rest of the production answered my question. 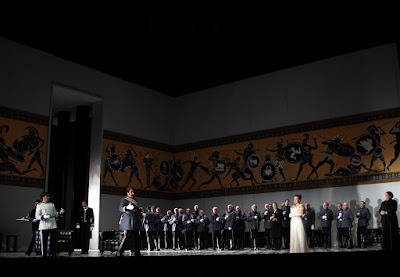 As the rich red curtain goes up in Faninal's home we are in what looks like an armory with a pair of smoking howitzers and ammunition center stage. Across the wall, a Greek wartime frieze reminds us that Faninal is an arms manufacturer, and would love to get his daughter married to a Baron so he can achieve further aristocratic status. The cannons offers a satisfying phallic symbol for Baron Ochs, but I found this cheap imagery. However, by setting the opera in 1911 Faninal has the potential to become filthy rich when World War I begins. In addition, at the conclusion of the evening, Mr. Carsen continues this militaristic theme by showing us the reality of the crumbling Austro-Hungarian Empire coming to a crashing end. Act III moves the scene from a private room at a country inn to an urban high-class brothel, complete with female nudity and a proprietor in drag.  I don't have a problem with Act III, except that the appearance of the Marschallin at a brothel is really a preposterous notion. It makes the "deus-ex-machina" aspect of her role more obvious than ever. Let's just state that the setting of Act II sparks my curiosity, but really makes no sense, and let's leave it at that.

It is an opera about the passage of time, and there was Renée Fleming in her farewell performance to this role, which she has sung with great acclaim all over the world. I found her voice still beautiful after all these years, although she moved cautiously through the first Act saving herself for the ravishing trio towards the conclusion of Act III. She could not have had a more wonderful Count Octavian than Elīna Garanča's great impersonation of a 17 year old boy in the throes of lust for an older woman. She sang with amazing precision and wealth of voice. I heard that Günther Groissböck's Baron Ochs was also booed opening night. I can see some conservative audience members objecting to his aggressive take on the role. This Baron Ochs is not just a oafish country bumpkin, in the hands of Mr. Groissböck he becomes a sexual predator to be feared and avoided. The rest of the cast sang very well, especially Matthew Polenzani, here made up to be an Enrico Caruso temperamental, womanizing Neopolitan caricature, handing the Marshallin an RCA Victor 78 rpm recording before embarking on his rapturous solo. Great performances were also given by Erin Morley's Sophie and Markus Brück's Faninal. 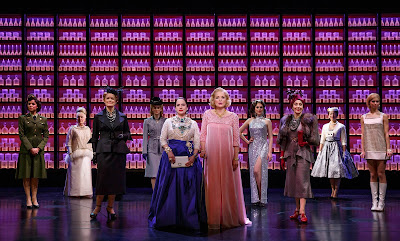 Will I go back to see the show again, with both stars present?  The folks at the Nederlander are encouraging this. They gave out vouchers to exchange our tickets for a later performance, while at the same time asking us to stay and see the show. The bottom line is that no theater likes empty seats, although there were many since some ticket holders opted to exchange tickets or get a refund. For the majority of theater goers it makes no sense to see this kind of show without the joint shine of the two bright stars.
Posted by Vincent Vargas at 10:14 AM No comments: