A new Meistersinger at Bayreuth 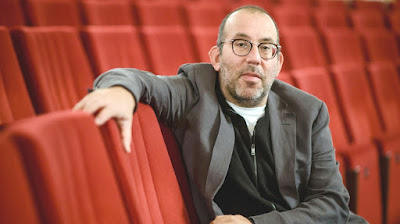 The new production of Die Meistersinger von Nürnberg that kicked off the 2017 Bayreuth Festival is the brainchild of Australian director Barrie Kosky, who describes himself as a "Jewish gay kangaroo."  This Meistersinger is not very Australian or very gay, but it is certainly very Jewish.   Actually, a "Jewish Meistersinger" is not much of a stretch.  The opera contains one character, Beckmesser, that has often been played as a Jewish stereotype since it is based on Eduard Hanslick, a Jewish critic of Wagner's time who was present at an 1862 reading of Meistersinger, and stormed out of the room in protest.  The character of Beckmesser was called Hanslich in early drafts of the libretto.

Mr. Kosky's production begins in the library of Wahnfried, Richard and Cosima's mansion in Bayreuth.  Gathered there are the principals of the comedy: Hans Sachs and Walter von Stolzing; and they are dressed like Richard Wagner himself.  Even the children running around there (Wagner's children?) look like miniature versions of their father (with under-the-chin beards!).  Also present is Eva, but she is not a Wagner clone, instead she is made up like Cosima.  Pogner is a long haired Franz Liszt, and Beckmesser appears as the conductor Hermann Levi, a Jew, whom Wagner pressured to get baptized before conducting the premiere of Parsifal.  Levi did conduct those first performances of Wagner's last work at Bayreuth, but he refused to convert to Christianity.

It is a very playful first scene of the opera.  Here you have Walter wooing Eva as the opera calls for, but what we see is Wagner wooing Cosima, while the "real" Wagner looks on.  During this first scene Hans Sachs as Wagner acts as a kind of overlord guarding the sacred flame of "Holy German Art" that he will once again mention at the end of the opera.  At the same time director Kosky is playing with these "sacred" German myths without shattering them. 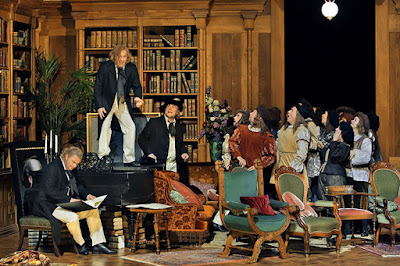 Those familiar with Stefan Herheim's great 2008 production of Parsifal at the Green Hill (which I got to see live in 2012) will remember that the opening scenes of that setting also took place on the grounds of Wahnfried.  Is this Kosky production then, Herheim-lite?  Not at all.  Whereas Herheim was exploring the history of Bayreuth as it intertwined with Germany's own 20th century history, Kosky is interested in surfacing Germany's not so hidden history of antisemitism and the role Bayreuth played during Wagner's own time, and specially during the Third Reich, when the Festspielhaus willingly played host to Adolf Hitler and his cohorts.

In every second act of Meistersinger Beckmesser gets beaten up, but in this production the citizens of Nuremberg go beyond a good thrashing.  They ridicule and mock him by placing a giant puppet head on him, and making him dance.  The head is a caricature of the stereotypical Jew as seen in the propaganda films that UFA studios produced under Josef Goebbels.  Der Ewige Jude (The Eternal Jew) from 1940, is perhaps the best known of these films. There is also a tour-de-force moment at the end of the act that is over the top, but I will not spoil it for you in case you are traveling to see this production live. 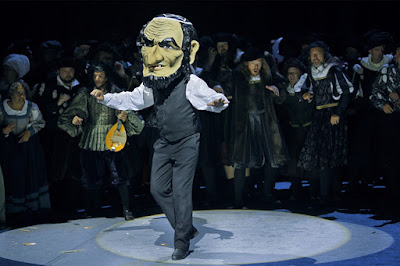 Setting the last scene in a courtroom reminiscent of the one where the Nuremberg trials were conducted was a stroke of genius, but I felt that Krosky could have done more with such a poignant setting.  Perhaps in subsequent years, as he rethinks his production, he might want to add some elements that will make this setting stand out even more.  At the moment, he might as well have set the last scene of the act outside the walls of old Nuremberg as Wagner indicates in his libretto.

What an amazing collection of singers have been brought together for this production! Something that Bayreuth doesn't always achieves these days.  Michael Volle, perhaps the greatest Hans Sachs of our times was in glorious voice, as was Klaus Florian Vogt as Walter von Stolzing.  Vogt has a Dorian Gray thing going with his voice.  The more he ages, the younger he sounds.  His singing was exemplary throughout, and his winning song aria was quite beautiful. Unfortunately, the same could not be said of Anne Schawenwilms's Eva, who sounded weak and unsteady.  She was the only artist boo'd by the critical, but enthusiastic opening night crowd. Philippe Jordan led the incredible orchestra with competence, preferring stately rhythms and ultimately producing a pleasing, lush sound which at times tended to overpower the singers.

I saw this production live on BR-Klassik over the Internet this morning here in New York, but I will be going to Bayreuth this year, and will catch the August 7th performance of this opera.
Posted by Vincent Vargas at 7:04 PM No comments: