The New La Traviata at the MET 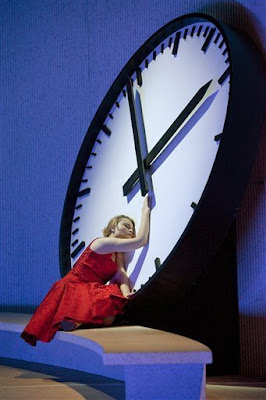 Willy Decker's staging of La Traviata was the sold-out event in the summer of 2005 at the Salzburg Festival. That production, starring Rolando Villazón, Anna Netrebko, and Thomas Hampson has been immortalized in DVD and Blu-Ray disc for all time. Now, this same production arrives at the Metropolitan Opera, replacing the Franco Zeffirelli bombastic, huge, opulent staging that few critics liked, but that most audiences loved. When next they update the history of the MET, they will remember the Peter Gelb years as the time when the opera house finally grew up out of its Joseph Volpe artistic lethargy and re-joined the ranks of the great opera houses from across the pond; the time when the MET began to present avant-garde productions featuring contemporary stagings by many of the best European directors and designers. As a result, these days the intermission conversations at the MET seldom center around the performers, but neither are there deep discussions on the virtues of a given new staging. Everything is dismissed as Gelb bringing in Eurotrash! The Gelb years at the MET will always be remembered as the time when the MET might have hit a new pinnacle of artistic excellence and innovation, and the audiences do not care. The times might change, but it is interesting how MET audiences persist on remaining the same. This Saturday afternoon, during the single intermission (after Act One!) of this production, the snippets of conversation that I caught involved wanting Zeffirelli's production back coupled with the phrase "I'm a conservative."

In the Four Quartets poet T.S. Eliot writes "we had the experience but missed the meaning." Wake up people! There is a revolution going on at the Metropolitan Opera the likes of which this opera house has never seen, and it is passing you by because many of you are artistically asleep. Awaken!

Decker's production deconstructs Violetta's world, and in Act I turns it into a night journey of androgyny devoid of time period or setting. Looming above the action is a white bearded old man who in Act IV turns out to be Dr. Grenvil, but who in the opening acts moves about the set looking down at the characters and even directing the action like the stage manager right out of Thorton Wilder's Our Town. In one incredible sequence, he clears out the choristers from the stage by walking towards them while they back away from him and exit via the only way in and out of this set: double doors that shut tightly close like the prison that is Violetta's world. This character, oftentimes compared to an emissary laying down the rules of the force of destiny, reminds me physically of Giuseppe Verdi himself; as if Willy Decker invoked the approval of the composer himself in order to stage this work.

The sets by Wolfgang Gussmann owe much inspiration to the 1930's geometric sets of Adolphe Appia, and the New Bayreuth experiments of Wieland Wagner. As a matter of fact, the best set for an Act III of Tristan und Isolde I have ever seen is Act IV of this Traviata. The staging area now completely bare, Violetta dying on the floor while waiting for her beloved Alfredo to arrive, as Annina, Dr. Grenvil, and Giorgio Germont sit on a semi-circular bench hopelessly waiting the end. This is Tristan! Just change the names of the characters around!

Gussmann's costumes are also interesting. Throughout the production Decker plays with Violetta's red dress and red pumps. Oftentimes, when she wears them and, more importantly, when she sheds these clothes, the action is filled with hidden meaning. Also, when choreographer performer Athol Farmer, reprising his Salzburg performance, his face covered by a kitschy Spanish señorita mask, dons Violetta's dress and performs a Spanish dance meant to mock Alfredo, it is the pinnacle of an act where both female and male choristers gender-bend by wearing tuxedos, while they wear masks of the opposite sex.

I was pleased by the performances on Saturday afternoon. Marina Poplavskaya sang the role with strength and assurance. Blondes do seem to have more fun, it is said, but I wish that she would have donned a brunette wig for this production. Not that I want her to look more like Netrebko, it's just that a brunette Violetta is more in keeping with the overall basic colors of this production. Matthew Polenzani gave the best performance I have ever heard from this tenor. Andrzej Dobber was a stentorian Giorgio Germont, although I miss Thomas Hampson from the original Salzburg production.

The biggest issue that this production brings up is how long is the MET going to keep Decker's Traviata? This staging was to be one hot summer ticket in 2005, and then it was meant to be packed away never to be seen again (at least not in Salzburg). The MET has always been a house where productions have outlasted their welcome after twenty years. As Anthony Tommasini pointed out in his review in the New York Times:

"The question is whether the Decker “Traviata” is the kind of reconceived production that will last for seasons into the future. Perhaps the MET will become a house where productions are rotated more often, which would be an interesting departure, though an expensive one."

Let's hope this is the case.
Posted by Vincent Vargas at 10:15 AM No comments: