Broadway is Back: THE MUSIC MAN

Yes, Broadway has been back for a while, stumbling out of the COVID-19 nightmare in spurts. But this afternoon was MY first time back inside a Broadway theater since 2020. And if it wasn't for the masked crowds and a new job for ushers (see the picture below) the magic is back, and the audiences are more excited than ever. 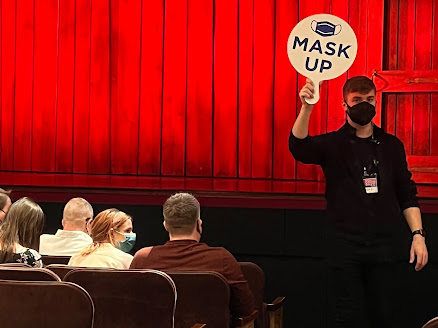 So, it really does not matter that New York Times critic Jesse Green panned the new production of Meredith Willson's The Music Man. Audiences are hungry for live theater, especially when it features superstars like Hugh Jackman and Sutton Foster whose names appeared on the marquee of the Winter Garden Theatre months before the virus hit, only to be silenced until the end of 2021. And just as the production got going, Mr. Jackman tested positive and had to quarantine, shutting down the show once again. It's been tough going for this production, and just about any other production currently on the boards.  All Mr. Jackman and Ms. Sutton had to do this afternoon was show up on stage. Before they uttered one word or sang one note the audience roared. Live theater is indeed back!
Mr. Green feels that this Music Man lacks the necessary fire to ignite this piece into relevancy. He cites a Stratford Festival production that comments on race and social relations by casting an African American actor as Professor Harold Hill. No doubt Mr. Green would have been pleased with a Broadway production that places concept over star power. But, is that the job of a musical comedy? If it is, then the genre is in danger of falling into the same conundrum we face in the opera house, where director's ideas trump casting. These days the need for true opera superstars has been eliminated -- after all it's the concept that matters. At Broadway prices, it's hard to experiment. Not even Bartlett Sher at Lincoln Center, responsible for some of the most memorable revivals in recent years, has avoided any real experimentation with the works he has chosen to stage: (South Pacific, The King and I, My Fair Lady) I'm happy that Jerry Zaks, the director of this revival, still believes in old fashioned theater, and this time he has assembled a talented cast that raises the roof off the Winter Garden with a traditional staging of this classic.  It doesn't go flat as the Times headlines stated, not with the chemistry that ignites in the pairing of Jackman and Foster and in the spark that is present in the work itself. 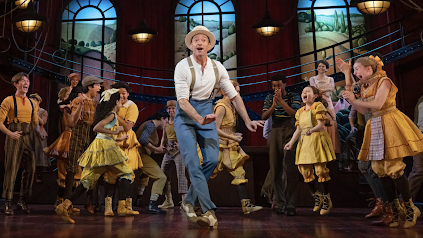 Hugh Jackman is having a lot of fun playing Professor Harold Hill. You can tell. There is a twinkle in his eye and a spring in his step that humanizes this traveling flim-flam man. But in his swindle talk he oozes charm and warmth, especially effective is his relationship to Winthrop, Marian the librarian's little brother who has a lisp and prefers not to talk. Mr. Jackman is no Robert Preston, who originated this role on Broadway in 1957, and who starred in the 1962 film that shows the perfection of his characterization.  As a matter of fact, I was disappointed with Mr. Jackman's version of "Trouble." He had the verbal patter down flat, but his musical intonation in his Sprechstimme left me cold. Is it that Robert Preston just owns this role perpetually as Maria Callas made Tosca her own? In 2000, in Susan Stroman's production of this musical, actor Craig Bierko fared better with this song. The timbre of his voice was closer to that of Preston, and the song worked. It was clear that Ms. Stroman's goal was to provide a Robert Preston sound-alike, although the relatively unknown Mr. Bierko made a true splash earning a Tony Award nomination for his fine performance next to Broadway superstar Rebecca Luker. The present production is a vehicle for Mr. Jackman, and one which is generally suited to his many talents. His co-star Sutton Foster is wonderful as Marian. Her comedy gifts and beautiful soprano are great assets to this production, and her entrance received a great ovation. I also want to mention the participation of Jefferson Mays who is quite funny as Mayor George Shinn. Mr. Mays is having a good year: he is also featured in the film The Tragedy of Macbeth where he plays the Doctor. 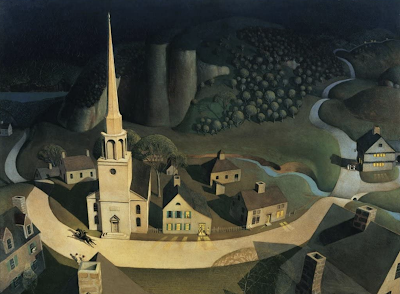 The set by Santo Loquasto is inspired by the art of Grant Wood (born in Anamosa, Iowa), a town which may not be too different from River City. There is even a backdrop inspired by Wood's "The Midnight Ride of Paul Revere." Interestingly enough, from my seat in the house (Orchestra, Row J seat 2) I couldn't see Paul Revere. Why was he eliminated?
In general, this show was a very entertaining; a very fun afternoon at the Winter Garden Theatre. It is a production that you will thoroughly enjoy whether you are a Jackman or a Foster fan -- or both. I only have one little caveat with this production, and it comes from my knowledge of the aforementioned Stroman production. The post curtain call in that 2000 staging involved the entire cast, dressed in bright red band costumes actually playing their instruments. It was so unexpected to suddenly hear that sound from the stage from actors who had memorized and learned to play these band instruments just for that closing moment. Imperfections and all, it was a remarkable moment, a true coup de théâtre. In the current production the entire cast is once again dressed in Professor Hill's imaginary, colorful band costumes, but their instruments remain conspicuously silent.
Posted by Vincent Vargas at 11:46 AM No comments: