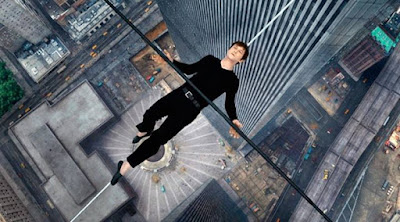 Robert Zemeckis loves to take us back to the future; his films recreate the past with his brilliant use of cutting-edge technology. He is a master at dressing up the events that he portrays with incredible accuracy and adding a showman's flair that sanitizes the events for the audience. In Forrest Gump, he took us through a cavalcade of American history through the eyes of a singular, memorable Everyman; and in Who Framed Roger Rabbit? he celebrated the heyday of American animation while pushing the technological envelope when it came to human-toon interaction.

In his latest film, The Walk, he takes us to the gritty, graffiti-filled New York 1970s, when the buildings of the World Trade Center were just the tallest structures in the world, far from the symbols of nostalgia and grief that they would become. The plot of the movie tells how an obsessed French aerialist came to be absorbed by the structures. Philippe Pettit could not help himself when it came to setting a high tension wire between the two buildings so he could walk across them, and although the film might glorify his soft-shoe 1974 routine high above the skyline of New York City, the film is really a paean to the lost Twin Towers, which Mr. Zemeckis recreates with a loving touch.

When a movie focuses on such a mythic, colossal structure, it's hard to squeeze in memorable performances. Joseph Gordon-Levitt manages to bring Mr. Pettit to life, but just barely, by donning an outrageous accent along with an equal histrionic manner. Subtle acting, it is not. In many ways, his performance mirrors Mr. Zemeckis's approach to the whole story. At the outset, for example, the director portrays Paris in a busy half black-and-white which tries to remind us of the French New Wave. Here Mr. Pettit runs into street musician Annie (Charlotte Le Bon), and it's love at first sight. But their boy-meets-girl fairy-tale story has no middle or depth as it leads to its nostalgic, predestined separation conclusion. Ben Kingsley, as Papa Rudy, a mentor figure, is a memorable Yoda character, but his wild eastern European accent (it's suppose to be Czech) is reminiscent of some of the foreign accents heard from Laurence Olivier towards the end of his career.  I guess when the movie is all about recreating a building something's gotta give.

Still, the movie is worth seeing from the technical point of view. Not Since Martin Scorsese's Hugo have we seen a better use of 3D. Mr. Zemeckis is a born showman, and he is not afraid to pull all the stops when it comes to using this technology. He knows that the audience likes to have objects come flying at them when they go to see a 3D movie, and of course he's not shy in giving it to us. But beyond the stereotypical effects, it is in the creation of a marvelous sense of depth and dizzying sense of vertigo that The Walk excels. And although a homage to bygone days is primarily at the heart of this film, it is the brilliant use of technology that at the end leaves us with the most satisfying cinematic moments.
Posted by Vincent Vargas at 11:44 AM 1 comment:

Pope Francis is finally in the Americas 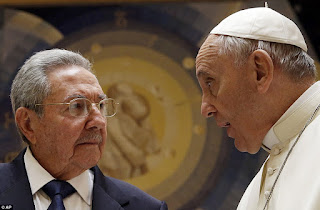