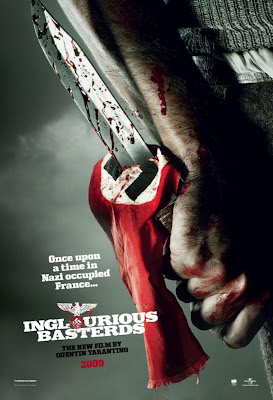 On a personal note, I wish they would have held off the summer opening of this film and saved it for a prestige premiere at this year's New York Film Festival. This year the festival promises to be mostly a ho-hum affair, and I think that Inglorious Basterds would have given that New York institution a good kick in the pants as well as brought Tarantino back to the place that launched his unusual career.
Posted by Vincent Vargas at 7:25 PM 3 comments:

The Bacchae in Central Park 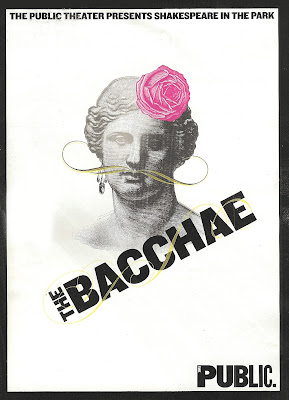 The Bacchae is perhaps Euripides' s greatest tragedy, and it is currently running as the second offering in this summer's Free Shakespeare in the Park. Under the direction of the Public Theater's former artistic director Joanne Akalaitis, this production is a compact, fast-moving one-acter played in modern dress, but maintaining the drive and savagery of the 2,500 year-old text. It is 90 minutes of Aristotelian unities, translated by Nicholas Rudall, and reenacted to the driving, undulating minimalist rhythms and melodies of composer Philip Glass.

This story of the hubris of a king, the foolishness of old men, and the wrathful vengeance brought about by the alien minion of a disrespected god makes for incredibly exciting theater. The Bacchae is part of the trilogy (along with the author's Iphigenia in Aulis and the now lost Alcmaeon in Corinth) that won the great prize at the Dionysia Festival posthumously for Euripides. They truly don't write them like they used to.

This production, performed outdoors as was the original, trades the blinding Aegean sun for the evening skies of late August New York. This transfers the essence of the work from sun-beaten rocks and blinding natural light to chic "late-night cool," and in keeping with this adaptation, the lead is a rock-and-roll Dionysus singing into a microphone like Elvis, and a chorus of Maenads (the possessed Bacchant women enchanted by Dionysus) in bright orange costumes. The men and women's costumes offer an interesting contrast. Staying true to the play's theme of opposing forces, the male characters are uniformly in modern dress, while the women aren't.

Likewise, the set itself seems to be of two minds. Performed in a barren, metallic circular arena (complete with a narrow moat of water) to an audience sitting in a semi-circle -- a space reminiscent of the configuration of Greek amphitheaters, the playing area has an industrial feel to it, and that is also seen in the upstage lopsided bleacher-like construction that the actors often inhabit like spectators at their own play. The setting gives no specific clue as to the time the play takes place, and as a result a timeless feeling is achieved quite effortlessly.

A drawing card for this production is an original score by Philip Glass. The composer's work and style is a well-known commodity, and for this production he stays the course and provides a rich, sultry score in keeping with the kind of Glass that we are accustomed to. As we enter the theater a recorded minimalist pattern is repeated over and over again, setting the scene and perhaps adjusting our ear for the musical sounds that we will hear for the rest of the evening. But as we enter the course of the play, that barren overture seems to pale by comparison to the rest of the lush score. Glass's musical settings for a chorus of sopranos and altos are just lovely, with beautiful harmonies and attractive melodies throughout. He is less successful, however, when it comes to the music of Dionysus which seems contrived, often uninspired and seemingly searching in vain for a distinctive style. Not the kind of music I would have written for this haughty, self-assured character.

The last time I went to see The Bacchae was back in 1980 in the Michael Cacoyannis's production at the Circle in the Square, starring the great Irene Papas. It was a play that left me cold back in my salad days because Ms. Papas's star turn as Agave, though memorable as it was, happens during the last half hour of the work, and I remember not paying enough attention to the play waiting for Ms. Papas to show up on stage. When she did, it was worth it, but the long wait, I remember, left me cold.

The present cast features no superstars, but solid theater actors well-known to the New York stage community. In my opinion, this is the best way to experience this kind of play. As Dionysus and Pentheus Jonathan Groff (of Spring Awakening and Hair fame) and Anthony Mackie are strong foils. Groff in his long locks, and tight jeans seems to still be playing the teen rebel, while Mackie, handsome in his dark suit, adds an air of elegance to the production. When Mackie has to don a woman's dress, in the latter part of the play, the result is far from camp, but rather a prelude for the wild carnage that will occur. In addition, giving strong performances are the great André de Shields as a thyrsus-carrying Teiresias (I am glad that he is not encumbered with woman's breasts in this production) and Joan MacIntosh who shines in her Agave monologue.

But true to the democratic spirit of Euripides (and of the Public Theater) the greatest moments of the evening, in my opinion, belong to the two great monologues of the two lowliest characters in the drama: the Herdsman, played by Steven Rishard, who recounts with great relish the bacchanalia of the Maenads, and the Messenger, played by Rocco Sisto, who electrifies the audience with his powerful and monstrous details of the death of Pentheus.

Basically, this is a "not-to-be missed" production of a play that ought to be mandatory reading and viewing for everyone. It is one of the great works of the Western canon, and this production does more than justice to its greatness. The production will play at the Delacorte Theater in Central Park until August 30. For information about tickets visit The Public Theater's website.
Posted by Vincent Vargas at 11:03 PM 1 comment: