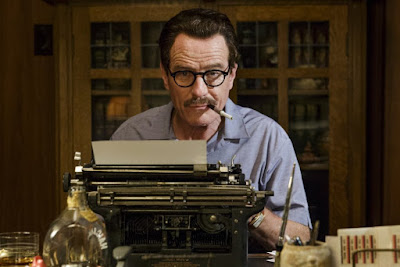 When I was in grammar school, I remember one of my classmates got chewed out by one of my teachers because he was reading the novel Johnny Got his Gun, the 1938 anti-war novel by Dalton Trumbo, better known as one of Hollywood's greatest screenwriters and one of the infamous blacklisted "Hollywood Ten." It was the early 1970s, the Vietnam War had stretched out to Cambodia and Laos, and Trumbo, a communist who had been to prison for not cooperating with the House UN-American Activities Committee (HUAC), was still persona non grata to many conservative people in this country.

Most people my age, myself included, did not know anything about him. I was fascinated by the name I saw in my friend's book (which had a picture of a soldier running against a hand doing a victory sign -- which to us in the 1970s was a peace sign). I did not know anybody called Dalton or Trumbo, for that matter. I'm sure my classmate, a tall, lanky boy with buck teeth named John O'Toole, was reading the book because it had been reissued in paperback as a result of a film having been released in 1971 (with a screenplay by Trumbo himself). And I'm sure he was curious about its lurid content. In the early 70s, the story of an American soldier, horribly deformed as a result of a mortar shell explosion in World War I was a thinly veiled anti-war comment on our involvement in Southeast Asia.

The film Trumbo feels as if its creators also had little knowledge of the man and the period. The film doesn't really feel like it was written, but more like it was cut and pasted from Wikipedia articles. Somehow, this biopic should have been told as a theater piece, and not as a movie. Film is too inquisitive and too exacting. Actors can bring to life such luminaries from the silver screen as John Wayne and Edward G. Robinson onstage, aided by the magic of theater.  However, film puts up a roadblock whenever well-known icons have to be represented.  As a result the attempt to recreate Hollywood in the late 1940s and 50s fails to persuade us. It feels like a sendup of Hollywood and not a loving recreation. Bryan Cranston's performance as Trumbo has its moments, but often he opts for an over-the-top approach. And unfortunately, it is also very clear that there are scenes that have been included only to make sure that he has a chance to garner a Best Actor nomination.

Only John Goodman as scumbag producer Frank King, and Helen Mirren as Hollywood's power broker Hedda Hopper survive the superficial approach this film takes. Christian Berkel as Otto Preminger and David James Elliott as John Wayne create minor caricatures, while Diane Lane, playing Cleo, Trumbo's wife, is just another person that we want to get to know better, but the film does not allow us to do so.

I learned a few facts about Mr. Trumbo but the film does not get under the man's skin, which is what any successful biopic must do. In many ways I was reminded of myself back in grammar school, a boy who did not know who this Dalton Trumbo was even though I had just been with the man for over two hours.
Posted by Vincent Vargas at 8:33 PM No comments: