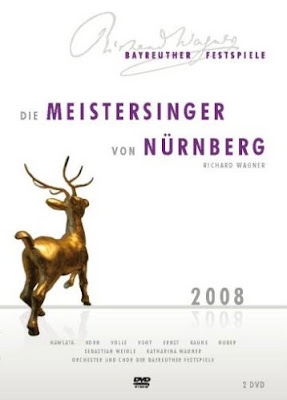 Once upon a time, operatic audio recordings would unite the world's greatest singers into make-believe studio productions that introduced millions to the world of opera. The opera recording started when Enrico Caruso signed a contract with the Victor Talking Machine Company, and it may have ended with Plácido Domingo's recording of Tristan und Isolde a few years ago. Making an audio recording of an opera has become a prohibitively expensive undertaking, and these days it is far more cost-effective to film live performances in opera houses, and release the results on DVD. Not only do you get the music, but you also get to see the productions and the artists. As the number of opera CDs continue to diminish, opera DVDs are flourishing. These days opera productions are breaking out of the proscenium and landing right in our living rooms, not only via DVD releases but also through HD telecasts and webcasts.

Bayreuth has long been a pioneer in distributing recordings of their long and distinguished legacy in the latest recording medium. It was in Bayreuth where the first live stereo recording of an operatic work was produced, and now they are busy releasing DVDs of their most illustrious productions.

Recently, the folks at Bayreuth sent me their new DVD release: Katharina Wagner's controversial staging of Die Meistersinger von Nürnberg, a production which premiered at the Green Hill two summers ago. Last summer this production, conducted by Sebastian Weigle, launched the 2008 festival in a unique way: the event was broadcast live on the Internet. Millions of people around the world were able to experience the production live from the stage of the Festspielhaus right on their own home computers.

Now this uniquely cinematic production has been released in Europe in a deluxe DVD set (it will be released in the United States later this year) featuring widescreen 16:9 aspect ratio as well as spectacular 5.1 Surround-Sound.

It is the practice at Bayreuth to film productions without an audience in order to fully control the soundscape and take advantage of the possibilities of camera placement that would otherwise interfere in the course of a performance in front of a live audience. This particular production is filled with minute details which have been captured by an army of cameras that seem to be everywhere capturing every salient moment. The summer webcast of this production offered a look at the production during a live performance, and it was a very successful experiment which I hope that the management at Bayreuth continues this year. This DVD however, offers a finer, more detailed look at Katharina Wagner's first staging at Bayreuth.

Don't hesitate to buy this DVD if it is available in your part of the world. It is the next best thing to being at the Festspielhaus.
Posted by Vincent Vargas at 8:16 PM 4 comments: