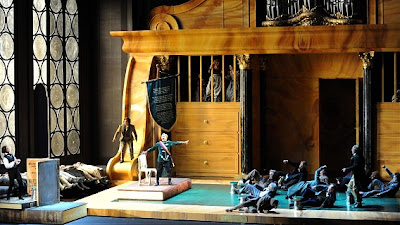 With all the controversy going on in Bayreuth over Frank Castorf's bicentennial staging of The Ring of the Nibelung, the Salzburg Festival, which is going on at the moment, has taken a back seat. Now that Bayreuth has premiered the tetralogy in its totality, and Mr. Castorf has received the loudest and fiercest boos I have ever heard at the Green Hill (worse even than when the late Christoph Schlingensief faced the crowd during the run of his Parsifal) one of the most anticipated Salzburg events is due to premiere: Stefan Herheim's new production of Richard Wagner's Die Meistersinger von Nürnberg. You may remember that Bayreuth's current production of Parsifal was directed by Mr. Herheim back in 2008, and there is a lot of anticipation as to what he is going to do with Wagner's glorious comedy.

Well, I know! He is going to stage the entire opera inside of Hans Sach's cobbler shop. From the pictures published by Intermezzo, it seems as if the characters are Lilliput sized creatures that will be roaming around a set featuring gigantic sized objects, such as shoes.

The opening night, this Friday, will be broadcast with a short delay on Unitel Classica, beginning at 20.15 CET (7:15pm UK time). 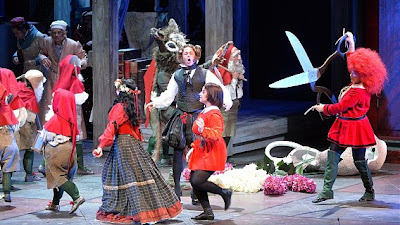 This staging sounds like a fun and imaginative way to stage Wagner's work. It is perfect for the Salzburg Festival. However, I don't like that I'm hearing that the Metropolitan Opera is interested in this staging as well. Already, New York has inherited its current La Traviata staging from Salzburg. That's one production that should have never gone into repertory at a house like the MET! It was great as a summer vehicle for Anna Netrebko and Rolando Villazón back in 2005. But Salzburg has moved on, and the MET is now saddled with a vision of a meat-and-potatoes work that after a few seasons already looks tired. I fear the same will occur with this Meistersinger if it comes to New York. Salzburg summer productions should never become repertory productions at the MET, especially not when it comes to Meistersinger. The current MET production is a sumptuous Otto Schenk creation that is as revered as his Ring Cycle that was replaced recently by the infamous "Machine."

I can already hear the boos on opening night. If New York wanted a Herheim production, then they should have picked up his current Bayreuth staging of Parsifal. I don't think it would please everybody in New York either, but at least I find it more interesting than the current François Girard staging that premiered at the MET this past season.
Posted by Vincent Vargas at 6:45 PM No comments:

Invasion of the Mini Wagners 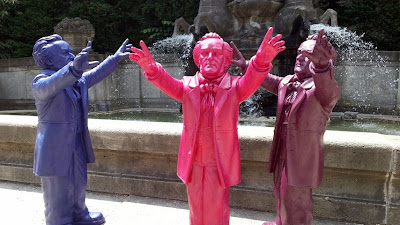 As part of the Richard Wagner year that is being celebrated all over the world, Bayreuth has commissioned 500 statues of the composer, each measuring one meter in height, in a standing conductor's pose, in all kinds of wild, crazy colors. The statues have been placed around town as well as on the lawns of the Festspielhaus. They are the work of artist Ottmar Hörl, who in the past has also made similar installations, such as multiple mini statues of Karl Marx, and a more controversial one featuring garden gnomes giving a "Sieg Heil" Nazi salute.

The Wagner statues are under 24-hour guard, in case some devious tourist wants to take one home. At the end of the festival, it is likely that the statues will be up for sale, as has been the custom with this artist's work. Expect the statues to go for €300-700.
Posted by Vincent Vargas at 2:36 PM 1 comment: 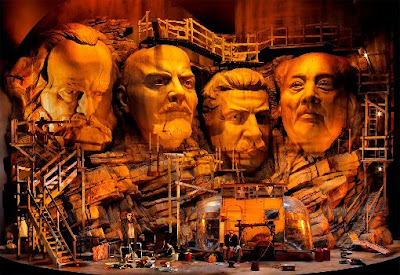 It's opening night at the Bayreuth Festival, and Karl Marx, Vladimir Lenin, Josef Stalin, and Mao Zedong will not be in attendance. That's because they have been placed on Mount Rushmore as part of the scenery for the new production of Richard Wagner's Siegfried, which will premiere on July 27 at the Festspielhaus. Under the direction of avant-garde director Frank Castorf, this new Ring of the Nibelung promises to be an epic production of greed, capitalism, and socialism during the 20th Century.
Posted by Vincent Vargas at 10:18 AM No comments: