The Death of Klinghoffer at the MET tonight

The Death of Klinghoffer, music by John Adams and the libretto by Alice Goodman is scheduled to premiere at the Metropolitan Opera tonight despite a massive protest outside on the Lincoln Center Plaza.  The HD and Saturday afternoon radio broadcast, as well as the Sirius transmissions, have been cancelled.  Is the opera Anti-Semitic? Is it pro-PLO? Make up your mind by listening to the work here.


Posted by Vincent Vargas at 6:51 PM No comments:

Verdi's Macbeth at the MET 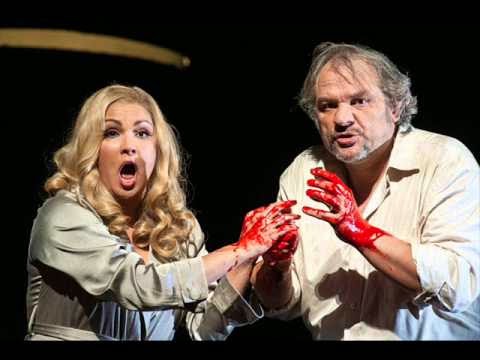 The trick with the early operas of Giuseppe Verdi, from the conductor's point of view, is to treat them with the same respect as his mature works. Riccardo Muti has been known to remind his musicians that with such a work as Falstaff they have lots of notes with which to create a world, and that even though the early works offer fewer notes, a world has to be created just the same.

Luckily, this is the approach that Fabio Luisi has taken at the Metropolitan Opera with this year's performances of Macbeth. He has conducted this early 1847 work (it was the composer's tenth opera) with utmost care; certainly going way beyond merely providing metronomic accompaniment to the oompah-pah nature of the score, and trying to find the  Shakespearean realm in a work which, although is highly influenced by the bel-canto works of Bellini and Donizetti, is definitely looking forward, trying to push the boundaries, and re-invent the Italian lyric theater.

Anna Netrebko and Željko Lučić, both in top form as the murderous couple, head a cast that also includes German superstar bass René Pape as Banquo and Maltese tenor Joseph Calleja as Macduff. Netrebko's voice has darkened, achieving the perfect timbre for Lady Macbeth, while Lučić's baritone (a voice similar to the legendary Leonard Warren, who first sang this role at the MET) was a solid personification of the title role. This is an artist whose voice usually is described as dry, but on Wednesday of last week he was in top form. In fact, every member of the cast sang with distinction, and if perhaps Calleja's tone is exhibiting a heavy vibrato these days, his rendition of "Ah, la paterna mano" was sung with true Verdian style.

The updated production by Adrian Noble holds up well, although, at times the direction given to the chorus of witches seems to be a bit too busy.

All in all, it was one of the rare times at the opera when everything worked.  How many times does one get a chance to admit that? Without a doubt, this run of Macbeth performances has been the highlight of the first part of this season.
Posted by Vincent Vargas at 4:27 PM 1 comment: 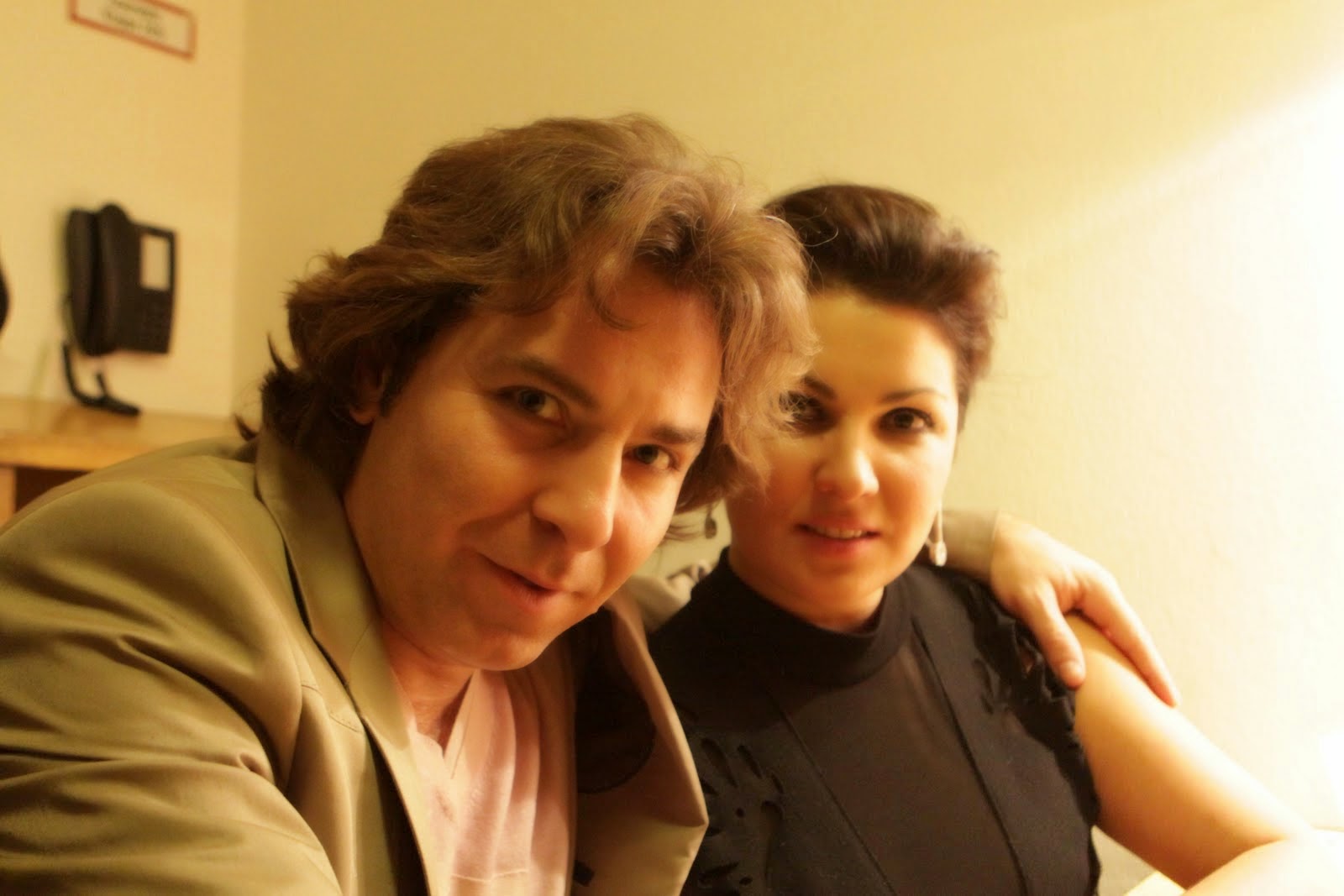 The rumors are that French tenor Roberto Alagna is discussing a production of Lohengrin at the Bayreuth Festival, with Anna Netrebko, to be conducted by Christian Thielemann. "If he thinks I can do it," says Alagna, "it's going to happen."

Bayreuth is due for a new production of Lohengrin. The current Hans Neuensfels production, which was booed when it was first presented at the Festspielhaus in 2010, featured Jonas Kaufmann in the title role and a chorus of rats. Since its rocky start, the audience has received it warmly, and it has been issued on Blu-Ray/DVD with Klaus Florian Vogt playing the swan knight. I saw this production in 2012, and it was one of the most satisfying evenings that I spent at Bayreuth that year.

The Green Hill will see a new production of this opera in 2018. Latvian director Alvis Hermanis (who this summer gave us the Netrebko/Domingo "museum Trovatore" at the Salzburg Festival) is scheduled to direct the work, and indeed, Thielemann is slated to conduct.  However, Bayreuth has not published the cast as of this writing.
Posted by Vincent Vargas at 5:02 AM No comments:

New Ring Cycle for The WNO 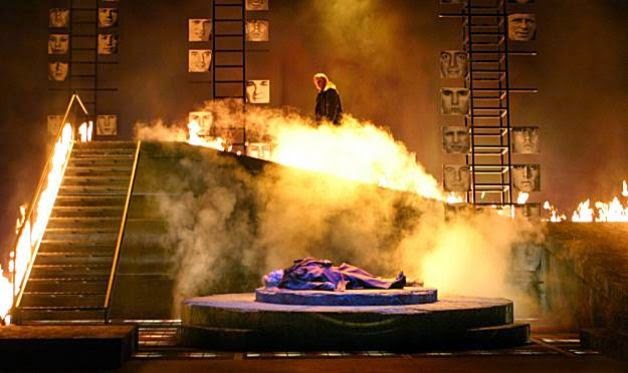 The Washington National Opera announced their complete casting for its first full presentation of Richard Wagner's Ring Cycle. Three cycles will be presented from April 30 to May 22, 2016. Artistic Director Francesca Zambello will direct and Philippe Auguin will conduct the orchestra.

The Ring cycles will feature two outstanding Brünnhildes. Acclaimed British soprano Catherine Foster, who has sung the sole at the Bayreuth Festival, will make her U.S. debut in Cycles I and II. Swedish soprano Nina Stemme, whose performances as Brünnhilde were highly acclaimed in this production's San Francisco run in 2011, makes her Washington debut in Cycle III. American heldentenor Daniel Brenna will take on the role of Siegfried in the United States for the first time. American bass-baritone Alan Held will return to his celebrated portrayal of Wotan.

Newly announced includes the return of American mezzo-soprano Elizabeth Bishop as Fricka and American baritone Gordon Hawkins as Alberich; the Washington debut of American mezzo-soprano Jamie Barton, the 2013 BBC Cardiff Singer of the World winner, as Second Norn and Waltraute; veteran Wagnerians such as American bass Eric Halfvarson as Hagen and Christopher Ventris as Siegmund; rising American stars such as soprano Meagan Miller as Sieglinde, soprano Melody Moore as Freia and Ortlinde, bass-baritone Ryan McKinny as Donner and Gunther, and contralto Lindsay Ammann as Erda, Schwertleite, and First Norn. There will also be the Wagnerian debuts of two Domingo-Cafritz Young Artists, American soprano Jacqueline Echols as Woglinde and the Forest Bird and American bass Soloman Howard as Fafner.

Regular subscription packages will go on sale in March 2015.
Posted by Vincent Vargas at 10:40 AM No comments: 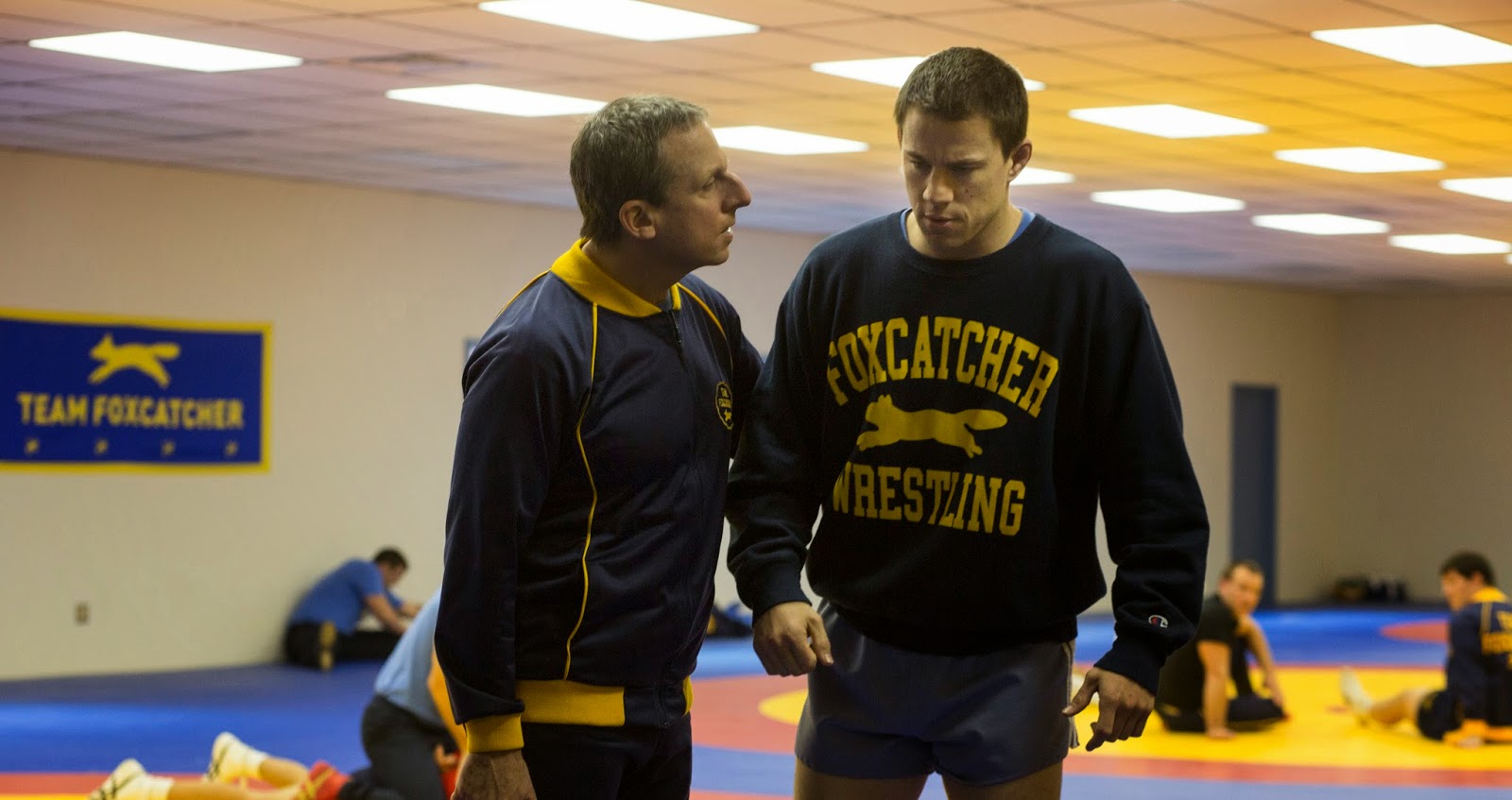 In an acting tour-de-force, Steve Carell throughout the film Foxcatcher, keeps his head raised at an unnatural, arrogant angle, as if to make sure his was above everyone else's -- a preening peacock with bottomless pools for eyes. His voice a gentle whisper that is delivered, deliberately and aristocratically, from half-opened lips. A prosthetic Roman nose giving him the proper patrician look of a bored emperor. This is the actor's approach to playing John E. du Pont and the events surrounding the true story of the billionaire, heir to the DuPont chemical fortune, who in the 1980s, with an air of dangerous jingoism, decided to sponsor the American wrestling Olympic team at his Pennsylvania home, the country estate Foxcatcher, where in the old days the blue blood Brahmins of the Northeast gathered to participate in elaborate English fox hunts. Mr. Carell's approach to his complex character not only works, but has become the surprise stellar performance of the New York Film Festival, already gathering plenty of early Oscar buzz.

Directed with great intensity by Bennett Miller, the cast also includes Channing Tatum and Mark Ruffalo as brothers Mark and Dave Schultz, Olympic gold medal wrestlers who are brought to Foxcatcher to be the anchors of the team that du Pont aims to coach and lead to victory. Former teenage actor from John Hughes's Sixteen Candles, Anthony Michael Hall appears as duPont's assistant, while the great Vanessa Redgrave has a cameo as Jean du Pont, John's octogenarian, wheelchair bound mother, who sees her son's decision to sponsor Olympic wrestling as beneath the family's dignity.

Following the real events of this story, du Pont first seeks the brutish Mark Schultz and lures him to Foxcatcher. Mark's humdrum life of morning training and eating ramen by night at his shabby apartment is now replaced by an existence in the lap of luxury. Before long, Mr. du Pont is introducing him to alcohol, cocaine, and dinner events with Washington DC movers and shakers. And as Mark's life heads into a hedonistic twisted relation with the billionaire, their complex father-son relationship rapidly derails.  That's when du Pont brings in the more gregarious Dave and his family to Foxcatcher to coach the team. Mark, who has always been in the shadow of his older brother, is unhappy about this. The entire film begins to take on the rhythms of a ticking time bomb, which eventually explodes in a series of events that ultimately leads to a ghastly murder.

Under Miller's direction, Greig Fraser's cinematography produces warm bright colors and beautiful wintry images. Likewise, Rob Simonsen's ominous score is full of chilling, subtle moments. If you enjoyed Capote and Moneyball, Mr. Miller's previous films, I am sure you will find Foxcatcher a thrilling experience that explores the temptations of wealth and the abuses of power.
Posted by Vincent Vargas at 11:06 AM 1 comment: 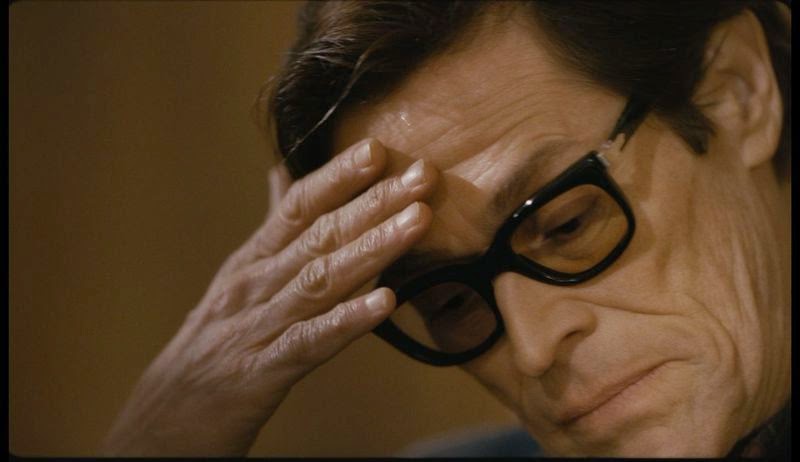 On paper, it must have looked like the perfect concept: iconoclast director Abel Ferrara to helm a biopic of Italian Marxist writer, poet, novelist, film director Pier Paolo Pasolini. The great man to be played by Willem Dafoe, who not only bears an uncanny resemblance to Pasolini, but who has also played Christ as well as the Antichrist. With all these elements in the bag, even Pasolini, who nearly 40 years ago in 1975 was brutally murdered, would have given his atheist blessing to this project.

However, the results are far from perfect. Mr. Ferrara's film, entitled Pasolini, focuses on the man's last days, perhaps the most promising period of the director's life before it was cut short by his grisly murder, on a beach near Rome, hours after picking up a male prostitute. The film also recounts Pasolini's efforts to finish his avant-garde novel Petrolio, and Ferrara stages some of these scenes, including a harrowing jetliner crash. At the same time, Pasolini was preparing a new film to follow up the controversial Salò, or the 120 Days of Sodom. The film was to be called Porno-Teo-Kolossal, and Ferrara dreams up the most magical and satisfying sequences in the entire film, using actor Ninetto Davoli (Pasolini's former lover and life-long friend). Two characters, Epifanio (played by Davoli) and Riccardo Scamarcio (who plays the young Davoli) follow a star in the sky that promises that the Messiah has been born. The star takes them on a bizarre journey to Utopia, Sodom and Gomorrah where they witness an orgy in which gay men and women copulate for one night in order to procreate the species. The visual style tries to mimic Pasolini's cinéma vérité, and the effect works. As a matter of fact, these kaleidoscopic sequences are some of the few segments of the film that really take off.

The rest is pretty much a mixed bag. Ferrara's entire approach is to embrace randomness, and Mr. Dafoe is caught up in the director's net. His performance, memorable though it is, goes nowhere fast, and he is left with just an imitation of Pasolini. Further, unless you know something about Pasolini's life and the political events happening in Italy at the time of his murder, you will most likely be confused by the narrative. Ferrara is interested in creating vignettes from Pasolini's life, but these don't go anywhere, and the scenes end up confusing the viewer.

At Thursday night's showing at the New York Film Festival, Mr. Ferrara recalled when as a young man he first saw a film by Pasolini. It was The Decameron, and the director revealed that he admired how Pasolini seemed to be making the film up as the film unwound before your eyes. I'm sure that Mr. Ferrara was aiming to do the same here. But Pasolini was a genius, and he could get away with it. No such luck with Mr. Ferrara and his latest movie.
Posted by Vincent Vargas at 3:06 PM No comments: