The Tragedy of Macbeth at the NY Film Festival 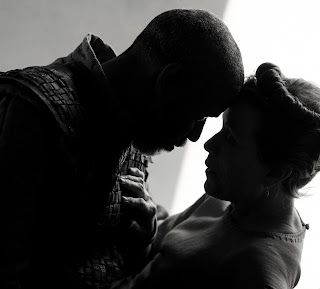 After a long time not posting on this blog, I am glad to say that I am back. Many things happened during that time. There were deaths in the family as well as COVID, which changed all our lives, and whose specter still has us in its grip. But last night, I saw a film that was so riveting that I feel compelled to come back to these old pages and share some of my ideas about it with all of you.

William Shakespeare's Macbeth, by my count, is the fourth time a major filmmaker attempts to adapt Shakespeare's arguably bloodiest, and also shortest of all his tragedies. This time around Joel Cohen, going solo after his brother Ethan Coen announced recently that he may be through with show business, has given us his interpretation of the Scottish play, and what an amazing visual feast it is.

The Coen brothers have always been very particular about the powerful images that grace their canvases. This time, Joel Cohen has decided to shoot the film in black and white and present it in Academy Ratio. This choice gives the film a timeless look. It makes us think of Orson Welles's moody, shadow-filled film interpretation of this play. Or perhaps, Akira Kurosawa's brilliant Throne of Blood, where the setting shifted to feudal Japan. Thanks to the brilliant cinematographer Bruno Delbonnel the images transport us to another time. The whole production was shot in sound stages making even exterior shots seem oppressive and lacking any true daylight. The sun never shines in this production (does it ever really shine in Scotland?), and this is another aspect of this production that works well.

Comparing it to other genres, this film brings to mind the brooding atmosphere of Laurence Olivier's Hamlet as well as the look of a Val Lewton horror film. Actually, to be more precise, and fitting, this movie looks like a medieval Film Noir. And given the Bard's plot involving a woman urging her husband to commit murder, as Joel Cohen noted in the Q&A that followed yesterday's showing of the film at the New York Film Festival, this comparison is quite apt. The Double Indemnity, black widow, pulp vibe of Shakespeare's play was one of the things that drew Mr. Coen to this project.

Our childhood reading of this play constantly brings us back to the Bard. Macbeth is my favorite Shakespeare play. It is also a favorite of Frances McDormand who plays Lady Macbeth in this film. I read this work in junior year of high school, Ms. McDormand revealed last night that she was asked to recite the sleepwalking scene during her early school days. For Denzel Washington, who plays the title role, his introduction to Shakespeare happened while he was a pre-med major at Fordham University at Lincoln Center. At the urging of his teacher and mentor Robert Stone (who was also my teacher) he played the title role in Othello on the Fordham stage. The rest is history.

Personally, I always love to see what directors do with the roles of the witches. In the groundbreaking stage production of the 1930's, which moved the setting to Haiti, director Orson Welles and producer  John Houseman hired Haitian Voodoo witch doctors to play these parts. In this film, Kathryn Hunter assumes all three roles, and all I can tell you is that you will not soon forget her. She is a subtle, weird presence on the screen, and thus really terrifying: the stuff of nightmares.

The leading roles are masterfully handled. Mr. Washington is a capable Shakespearean as he has proven many times in the past, and Ms. McDormand, who has played her role on stage, is really a wonder to behold in this film. I was a severe critic of her performance in Nomadland, which was filled with way too many of her own personal mannerisms and thus never allowed me to fully enter into the story. Here, by contrast, she assumes the role of Lady Macbeth  and magic happens: Frances McDormand, the producer and Oscar-winning actress disappears.

But ultimately, it is the directorial work of Joel Cohen, going solo for the first time, which is the big winner here. The entire movie is filled with images you will not soon forget. There is one shot in particular during Lady Macbeth's sleepwalking scene that is as brilliant as anything that cinematographer Gregg Toland achieved for Welles in Citizen Kane.

Last night, while Mr. Coen was presenting his work, he noted a longstanding superstition connected to the play. “You probably know it. You’re not supposed to speak the name lest some horrible catastrophe befall you or the production. This is a superstition that all of us making the movie blithely ignored until Friday the 13th of March, 2020. Then we all got religion and after months passed and the show finally got back on its feet we started referring to it simply as ‘the tragedy,’” he said,

He ended his remarks by saying “I’d like to point out that just because it’s a tragedy doesn’t mean you can’t have a good time. So enjoy the tragedy.”

You too will be able to enjoy this Apple Original Films and A24 terrific production when the film officially opens at the end of the year.

Posted by Vincent Vargas at 7:15 AM No comments: