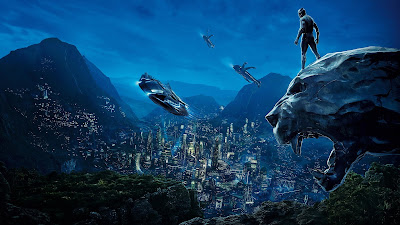 The premise of the comic book Black Panther, now a major motion picture from Marvel Studios, was to be an antidote to the racism found in such movies as the classic King Kong, or the countless Tarzan films, and Saturday morning serials such as Jungle Raiders, from Columbia Pictures. This was popular entertainment that Stan Lee must have eaten up when he was a youth, and which gave him the impetus to create an African superhero at a time of racial upheaval in his own country.

Racist America produced Skull Island, Kong’s domain: a place so backward that prehistoric monsters still ruled the land. That was the way the majority of Americans thought of Africa, if they thought of it at all.  And Kong himself, a kind of mutant giant ape was the perfect Freudian threatening view of a black man lusting after the blond white girl of his dream. “Blondes are scarce around here” is one of the memorable lines uttered by the white hunters when they survey the black tribe that worships the giant monkey. By contrast, Wakanda, the mythical African country where king T'Challa and his Black Panther alter-ego rule, is a technological wonder, decades ahead of any other country in the West, and hiding their advancements for reasons that are never quite made clear. The very idea of an advanced country being able to hide in the age of Google Earth is preposterous, but we must remember that Mr. Lee thought of all this when the very idea of the Internet was science fiction.

The film adaptation is visually quite stunning. The landscape of Wakanda is a cross between Fritz Lang’s Metropolis, the city of tomorrow, and Disney, Marvel Studios's parent company. Quite impressive to look at, but the film, despite its Afrocentric point of departure, and African American actors and crew, cannot entirely free itself from an essentially phony "Disneyworld's Adventureland" approach to a distant place many of us know very little about.

Black Panther, the film, has shown to be very popular with black families, especially in cities like New York, Detroit, and Chicago. There were, as a matter of fact, many African American families in attendance at the IMAX 2D showing I attended today. I can't keep from thinking that this film might be 2018's version of blaxploitation, the 1970's ethnic genre of films made for black audiences by white filmmakers. Certainly many of the stereotypical tropes of blaxploitation regarding the portrayal of blacks and whites reappear in this film. Whereas the majority of the black characters are shown to have an innate nobility, the white characters in this film are either villainous caricatures (Andy Serkis) or well-meaning, but befuddled allies (Martin Freeman).

How are we supposed to internalize this film? There is more than a hint here that we look at Wakanda with the eyes of Marcus Garvey's utopian Pan-Africanism movement of the early part of the 20th century, where he urged American and Jamaican blacks to return to their ancestral land. Or perhaps we can come to grips with this film if we borrow political theorist Richard Iton's controversial idea that the black diaspora simultaneous causes African Americans to disown and at the same time to desire the continent of Africa. Certainly any African-American watching this film would feel a connection to a utopia in the African continent, even if this wonderful place only exists in the movies.
Posted by Vincent Vargas at 8:49 PM No comments:

PARSIFAL at the MET

François Girard's Apocalyptic production of Parsifal is back at the MET this month, with a stellar cast, and under the direction of the soon-to-be MET's Music Director Yannick Nézet-Séguin.  This is the first revival of this production which made its debut a few years ago.

Mr. Girard places the opera in a barren landscape with tempestuous, ominous skies. On one side of the stage a group of men sit in a circle, all wearing black pants and white shirts, swaying, as if they were a cult in deep prayer. Meanwhile, the women are dressed in black, silent, and separated from the men by a giant crevice through which a river of blood flows.  Certainly not what Richard Wagner had in mind, but given the liberality of modern Wagnerian stagings these days, this production at least adheres to the concept of a physical grail, and a leader of the cult with a wound that refuses to close. The second act features a pool of blood, perhaps the most interesting part of this production, to represent Klingsor's lair.  The third act takes us back to the barren landscape, where eventually the women and the men will integrate after Parsifal returns the spear, thus uniting spear and grail: the ying meets its yang, and in this production, things get really Freudian when Parsifal dips the spear's point into the grail; the spear's phallic symbol penetrates the holy vessel. This heterosexual ending would have satisfied Wagner to no end, as it does the majority of the patrons of the Metropolitan Opera.

The MET has made certain that it gathered the best singers of today to present this revival. René Pape gave us his familiar reading of Gurnemanz, although I thought he lacked some heft Saturday afternoon.  Is all that nicotine catching up to him? As Parsifal Klaus Florian Vogt, who sang the role at Bayreuth two summers ago, gave us a sweet, lyrical reading of the title character. His voice is perfect for the foolish boy of Act I, but his light timbre is at times unconvincing as the mature Parsifal who comes back to save the knights of the Grail. "Why is Tamino singing Parsifal?" is a comment I have seen more than once in social media. Evelyn Herlitzius, another Bayreuth alumna was a strong Kundry, despite the fact that there were some unsteady moments throughout the performance. Peter Mattei as Amfortas, gave us, by far, the most satisfying vocal and acting performance: a man in deepest physical and mental anguish waiting to die so as to free himself of the duty he no longer wants to perform.

I can't wait until maestro Nézet-Séguin officially takes the reins of the Metropolitan Opera. Tempi always being one of the most argued aspects of this score, on Saturday he gave us a reading trending towards the slow side, especially in the prelude, and overall a masterful dissemination of this complex work.  I found his approach to the tender, quiet moments of Act III, as exciting as the bells and kettle drums of the Transformation Scene in Act I. (Are they using electronic instruments to represent the bells of Montsalvat these days?)

I get to go again on Tuesday, so I'm hoping for a performance as brilliant as the matinee I attended last Saturday.
Posted by Vincent Vargas at 9:42 AM No comments: