Bayreuth's new Lohengrin: Of Rats and Men, and More Rats 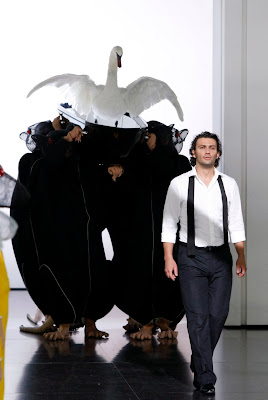 One of the many results of the so-called Regietheater, the director-driven style of presenting opera that has Europe and most of America and the rest of the world in its tight grip, is that along with an askew, left of center imagination that sets the opera in a place, time and space that the original composer never dreamed of, the production team has to ensure a certain level of controversy at opening night for the whole thing to properly work. Therefore, if the audience does not feel uncomfortable, or worse yet, if the audience behaves, then the production is deemed a dismal failure. On the other hand, if enough pockets of audience members throw themselves into an endless polemic during intermissions after participating in a rowdy booing attack, then the production might be considered a hit.

This is the easy recipe for Regietheater in which the director responsible for the transgression hopes to achieve the utmost in controversy. Christoph Schlingensief did it at Bayreuth in 2004 with his "voodoo Parsifal" that came complete with time-lapse photography of a rotting carcass of a rabbit being devoured by hungry maggots. Last year, at the venerable Metropolitan Opera, which has opened the door to a careful select version of Regietheater via the appointment of Peter Gelb, Luc Bondy's ugly new production of Puccini's Tosca featured a whore giving Scarpia a blowjob at his offices in the Palazzo Farnese. A wave of boos (which started from the Family Circle and moved on down) greeted the conclusion of each act only to intensify at the end when Mr. Bondy took a curtain call. He smiled; he was happy; he had accomplished what he set out to do: The MET finally had a Regietheater scandal.

Hans Neuenfels is no stranger to these kind of scandals, as a matter of fact he specializes in manufacturing them. This is the man that re-thought the Ethiopian slave Aida as a 20th century domestic black servant, and who caused a city-wide security issue when his production of Mozart's Idomeneo at the Deutsche Oper, Berlin had the title character carry in the severed heads of Jesus and Muhammad. It was about time for the 69 year old director to finally make his debut at Bayreuth, an opera theater committed to the new and unafraid of controversy. The director has chosen Richard Wagner's most romantic opera, Lohengrin. The musical direction has been given to the dynamic 31 year old Latvian conductor Andris Nelsons.

Neuenfels has transformed Lohengrin from a utopia fairy tale and has turned it into a dystopia of deep philosophical concepts that examines the human condition via kitschy images filled with outrageous humor. The chorus is dressed as white and black rats, perhaps letting us in on the fact that not all seems to be right in the colorful world that the composer has painted. Lohengrin's entrance (according to Wagner's stage directions, the knight enters in a boat pulled by a swan) is instead replaced with the figure of Lohengrin walking in, in shirtsleeves and undone tie, as if he has just finished a long day's work on the set of Mad Men with his stuffed swan carried in behind him by a swarm of black rats. I'm dead certain that King Ludwig II (1845-1886), who had the fairy tale castle Neuschwanstein built after he became enraptured by Wagner's Lohengrin, must surely be turning in his grave.

It is the kind of production that wants and needs a strong audience reaction and gets it, and that is exactly what Neuenfels craves. He has surrounded himself with a very talented set of collaborators just to make sure that the success is legitimate. The sets by Reinhard von der Thannen are mostly in shades of whites, while his costumes, particularly those of the chorus, when they are not dressed as rats, are brightly yellow and betray a smart haute-couture retro feeling. Think 1950's by way of Versace and you get the idea. 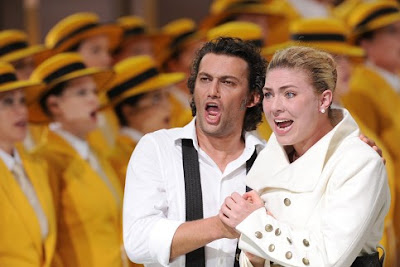 The main draw of this production is Jonas Kaufmann, opera's current sex symbol, whose name seems to be drooling on everybody's lips these days after making some of the most talked about, successful debuts around the world's stages this year. (His visit to the MET this spring in the roles of Cavaradossi and Don José re-charged the last months of the opera season.) His strong tenor, in the tradition of Franco Corelli and Plácido Domingo, may not possess the true heldentenor timbre, but it is perfect for this virile conception of the title character -- and his drop-dead gorgeous looks go a long way to fill in what may be missing vocally. His baritonal lower register again might not be what Wagner imagined for his Grail Knight, however, in this production he fits right in. Alongside Kaufmann is the beautiful and beautifully-voiced Annette Dasch who has been making some acclaimed debuts herself around the world. Are they the new opera couple? Are they the new Netrebko-Villazón replacements? Time will tell, but their opening night vocal displays moves them up a notch or two in the direction of world acclaim and instant celebrity recognition.

Finally, Riga-born conductor Andris Nelsons conducted a passionate reading of the score. Wagner was in his early thirties when he completed the music to Lohengrin, and having a young man at the podium channels the vigor that the pre-Ring, pre-Tristan und Isolde Wagner possessed when he wrote this totally German in spirit, but Italian opera-infused effervescent score.

Now that Wolfgang Wagner is dead, total control of the festival has passed down to Richard Wagner's great-granddaughters. Both Katharina Wagner and Eva Wagner-Pasquier have been chosen by Bavaria's culture minister, Thomas Goppel, to lead the festival into the 21st century. In the same way that Wieland Wagner and his brother Wolfgang revived the festival from the ashes of World War II, Katharina and Eva seem to want to take the festival to the forefront of the opera world and to the outer reaches of artistic merit. Their recipe appears to be a kind of operatic theater where youth (or youthful thinking) is at the helm, and where conservatism is continually engaged in an awkward dance with the forces of the avant-garde. When one thinks about it, not too different from the post-War years that brought back the Bayreuth Festival in 1951. Essentially everyone is engaged in an artistic journey in search of the Wagnerian truth.
Posted by Vincent Vargas at 9:57 AM No comments: