THE BATMAN - Robert Pattinson in the suit 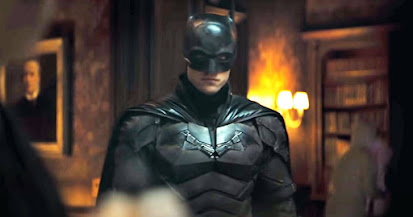 In the new film The Batman, Gotham City is an amalgamation of 1970's urban blight New York City with surreal touches of London and Chicago. Add to that geographical stew that unnamed city where David Fincher's SE7EN takes place (where it never stops raining), and you got the makings of a brooding chapter in the Batman saga. In addition to the downbeat atmosphere already described, director Matt Reeves and his cinematographer, Australian Greig Fraser, turn down the lights to gloom level just to make things really "noir." It is three hours of a cinematic universe where lights rarely shine, and where most of the denizens seem to live only in the nighttime hours.

The story begins on the night of October 31st, and half of Gotham City is masked and reveling in a Halloween night where the other half is engaged in various criminal activities. The Bat Signal is up, its weak light shining against the ominous clouds, and the Batman has heeded its call. This is a caped crusader full of doubts and misgivings about his choice to be a vigilante. He calls himself "vengeance," and he ably saves a subway passenger from the wrath of a gang in skull makeup. This is a world-weary crime fighter, worlds away from being a super hero. 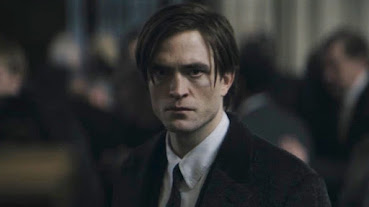 And when Batman's alter-ego, Bruce Wayne, shows up, Mr. Pattinson, lighted in the film's muted colors, looks more spectral than ever. Surrounding him are a cast of characters all played memorably by a great cast. Jeffrey Wright as Lieutenant James Gordon seems to be the only good cop in the whole city. Colin Farrell is a round, scarred mobster they call The Penguin, John Turturro is memorable as a mafia boss that likes to wear shades despite the gloom that surrounds him, and Andy Serkis is given very little screen time as Alfred, Bruce Wayne's butler and confidant. A sick-in-the-head masked serial killer, who likes to leave riddles inside greeting cards for the Batman after he murders important civic leaders, ends up being Paul Dano, who regretfully performs the worse rendition of Franz Shubert's "Ave Maria" I've ever heard. This well-known song is used as a leitmotif throughout the film, but I fail to see its connection with anything happening on the screen. Alongside the Batman we also have another costumed vigilante played by Zoë Kravitz. She likes to wear slin-tight leather outfits and loves cats.

To be honest, I usually don't run out the first weekend to see a film like this. But the other night I was at Lincoln Center for the premiere of Ariadne aux Naxos, the Richard Strauss opera starring superstar soprano Lise Davidsen. Little did I know it was also the New York premiere of this film. So, the entire Lincoln Center Plaza was mobbed: barriers everywhere and autograph seekers running around. Serkis and Pattinson passed by surrounded by a horde of bodyguards. Jeffrey Wright stopped by to sign a few autographs, and so did Paul Dano. He stopped next to me to sign a fan's poster, fast enough for me to snap a picture of him. 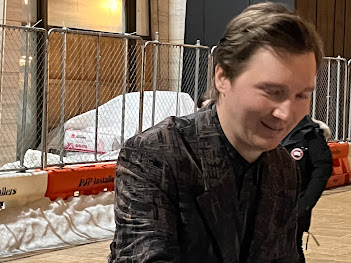 So, I said to myself, "maybe I should go see this movie." And I did, this afternoon, and I had a great time, even though we had to get moved to another screening room because they were having technical problems with the projector. In any case, it was an enjoyable afternoon at the movies, and I recommend this film. It's a very entertaining way to spend 176 minutes of your life.

Posted by Vincent Vargas at 6:50 PM No comments: