Madam Butterfly at the ENO 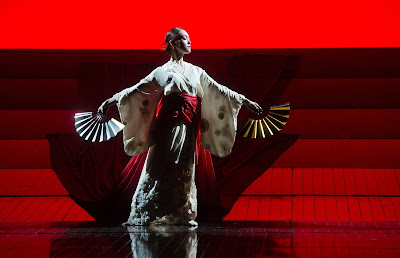 It is such a delight to rediscover Anthony Minghella's poignant, unforgettable production of Giacomo Puccini's Madama Butterfly at the place where it originated: The English National Opera, in its home base at the London Coliseum. Though it might be the biggest theatre in London's West End, it is an intimate house compared to the Metropolitan Opera, where I first saw this remarkable production. The ENO is the place where the late director envisioned this production, and it is wondrous to experience it in its original home. As is the custom of the house, the opera was performed in English in a translation by David Parry.

So much of the libretto by Giuseppe Giacosa and Luigi Illica is part of my operatic muscle memory, that hearing it for the first time in another language is disconcerting. Many times I had to resort to the supertitles at the ENO which are not ideally placed if you are sitting in the seventh row of the stalls (orchestra seats in the US). However, it is the tradition of the house: to perform all the operas in English, and eventually one gets accustomed to it. Actually, the only time I did not hear English at the ENO was many years ago when I went to their production of Philip Glass's Satyagraha, which was performed in Sanskrit.

One of the remarkable aspects of this production is the use of Bunraku style puppets, used throughout the production, but especially for Butterfly's little son. These life-like creations, operated by visible, but black-clad puppeteers gives a truly authentic Japanese air to the production, and needless to say no child actor can ever emote such longing as this amazing wooden creation in his cute, white sailor suit. This unique feature sets apart this staging of the opera from any other. So remarkable is the idea that many of the world's opera houses have borrowed this production. 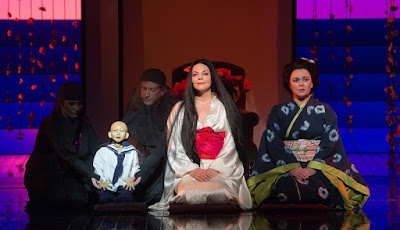 The orchestra, under the baton of Sir Richard Armstrong never achieves a quiet moment, which is so important in this tender work. As a result the voices are either covered, or, as was the case tonight, forced to throw away the composer's dynamic markings. I have never heard a "Flower Duet" sung fortissimo before, but here it was. Rena Harms, in the title role certainly has the voice and stamina for the role, and the same can be said for David Butt Philip, her BF Pinkerton. I just wished that the conductor had given them a break and allowed some subtlety to enter into the evening.

Despite the company's faults, which are not many, at least the city of London has an alternate choice to The Royal Opera House, Covent Garden. At the ENO families can still go to hear grand opera at popular prices. Boy, do I miss the New York City Opera. But hope springs eternal, though, and perhaps one day the phoenix will rise once more.
Posted by Vincent Vargas at 5:17 PM No comments: