Here is the second part of the José +10 Adidas commercial that has been running during the broadcasts of the World Cup Games. It's a really nice commercial, and the kids acted very well. It also feels like it must have been a thrill for them to have worked with all of these soccer superstars. Enjoy!

Posted by Vincent Vargas at 9:35 AM No comments: 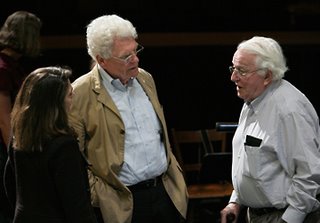 We are now less than a month away from the opening of the 2006 Bayreuth Festival and the new production of The Ring, which will be directed by Tankred Horst. In the words of the 80 year-old director, this new production of Richard Wagner's magnum opus will be a "world fairy tale." Even though this reveals very little about the approach the director will take, it does sound somewhat reassuring that it will not try to top Christoph Schlingensief's infamous production of Parsifal, which opened two summers ago to loud boos, and which will play again this summer. In the picture above, director Horst (standing on the left) is talking to Wolfgang Wagner, the composer's grandson and current Bayreuth festspielchef. The new Bayreuth Ring will open on July 26 with a performance of Das Rheingold.
Posted by Vincent Vargas at 7:27 PM No comments:

The first part of the Adidas commercial that is being run during the World Cup coverage. The greatest fantasy football ever played.

The last ABT Giselle for Julio Bocca 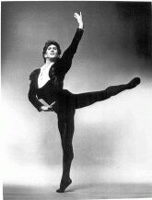 Last week I went to see Giselle in order to see Cuban dancer Xiomara Reyes, and instead found myself at one of the the last performances of Argentinian ballet superstar Julio Bocca. He will be making his last appearance with American Ballet Theater this Thursday in the ballet Manon. You can tell I am not a ballet fan, or rather, that at this point I do not follow the careers of the superstars of ballet because I did not know anything about Mr. Bocca's retirement from the company.

Last Friday's performance of Giselle was magnificent. Xiomara Reyes and Julio Bocca complemented each other beautifully as Giselle and her Count Albrecht. I suppose that I was lucky to attend the performance and experience an up and coming star and a legend ready to retire all in one night. I only wish that I would have been more of a ballet person and been able to enjoy Mr. Bocca's performances earlier. The truth of the matter is that more than likely I have seen him years ago, and did not even know. These things happen when one does not follow an art form. In any case, the performance was really delish and I hope to catch ABT again before the summer is out.
Posted by Vincent Vargas at 12:10 PM No comments:

The Drowsy Chaperone Awakes and Sings 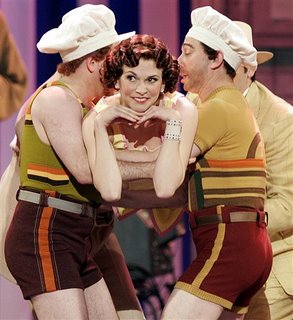 The American musical is not dead, let's get that out of the way right now! What is dead, buried and pretty much decomposing is the culture that bred the great musicals of the 1940's, the 1950's, and any other decade of the 20th century that produced the kind of lyrical theater that we have been reviving in the past twenty years. Good or bad, musicals are still being written, but they are coming from some pretty odd places (Toronto!) and are being adapted from really unusual property.

Here's the real question we should be asking: Do some people feel that the Broadway musical is so dead that audiences would feel perfectly comfortable paying top dollar to attend a postmortem, postmodern Broadway recreation of a musical? The people behind The Drowsy Chaperone seem to think so, and they have cooked up a cute, totally likeable one act, no intermission diversion that explores the clumsy kind of musical entertainment to which audiences apparently flocked during the 1920's. Watching The Drowsy Chaperone is like going to a really enjoyable lecture where a nameless Theater Queen (Man in Chair) dissects a pretty unimportant work (hell, it's not even a real musical!) in ritualistic fashion for our delight.

Had I seen this show before the Tony Awards, I would have concluded that what creator Bob Martin had in mind was simple homage to a genre he loves, and I would have left it at that. After listening to his Tony Award speech, things became a little more complex, and I concluded that all he had in mind was pure satire. Let's make fun of that second-rate entertainment by those third-rate composers and while we are at it, let's also do a hatchet job on that weird pack that just goes wild over them! Did he not mention in his speech the fact that his Tony Award will now give him a further chance to poke fun of even more musicals? I'm not surprised: Mr. Martin is an alumnus of Second City from Toronto, and this kind of biting satire is their middle name.

Although for true satire to work, a society must have a clear idea of what is being satirized, (and I am not sure how many in the audience were well versed with early 20th century musicals) on one level, I enjoyed The Drowsy Chaperone, although as most people, my knowledge of 1920's shows is quite limited. While enjoying the show, I thought of The Cocoanuts, the Irving Berlin musical that is only remembered today because it was one of The Marx Brothers' biggest Broadway hits, and served as the vehicle for their first film for Paramount Pictures. Later on, in the 1940's, when the brothers moved to MGM (minus Zeppo who became their agent) and made A Night at the Opera, they did to Verdi's Il Trovatore what should be done to Verdi's Il Trovatore, and everybody had a good laugh doing it. Think of The Drowsy Chaperone in this same vein: Bob Martin is doing to The Cocoanuts what could be done to The Cocoanuts; except that he does it with a sharper hatchet, and with songs and lyrics that may not match the style of the times, but which do match the quality of the original music of some of these shows of that time (The Cocoanuts might be the only Irving Berlin musical that does not have a single hit). Just don't expect the same artistic level as the Marx Brothers, and you'll be fine.

The ensemble cast is excellent. Alluding to one of the lines in the show: they all do well with their two dimensional characters in the well-worn plot. Sutton Foster and Tony Award winner Beth Leavel, in the title role, are particularly memorable, but so are Garth and Jason Kravits who play two funny gangsters, and Danny Burstein who plays an oily Latin lover character called Adolpho -- a cross between Rudolph Valentino and Cesar Romero on a bad day.

But it is all Bob Martin's show. As our host he allows us to enter the brain of the Man in Chair. What we find there is a bit complex and really sweet. Watching the show I thought how interesting it would be if the characters that he had conjured suddenly took arms against their creator, giving way to a kind of Luigi Pirandello situation with forgettable songs. Alas, that would not be this kind of a Broadway musical (maybe a Stephen Sondheim musical), and certainly not the kind of fluff that our host is captivated by, and with which he entertains us for a little under two hours.
Posted by Vincent Vargas at 4:31 PM No comments: 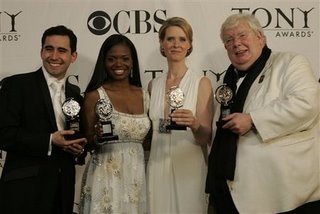 Taking all into account, it was a memorable New York evening, which goes to prove that even though the 60th Tony Awards might not have had scores of historic plays and musicals to honor, just being at such a star-studded glamorous evening makes all the difference.
Posted by Vincent Vargas at 11:50 PM 1 comment:

The Tony Awards are this Sunday!

The Tony Awards are this Sunday -- and I'm going! I'll be attending the broadcast for the first time, and I am looking forward to being there during this live television event. Of course, it is one of the shows with the lowest ratings on television, and this poor musical year will not help the show's ratings. I marvel at how CBS keeps the show on its roster year after year! Still, it will be fun to see the stars, and to attend a "black-tie" only affair. Those are becoming very rare these days. I will be sitting there cheering for The History Boys, which I am sure will win the "play" categories. I am sure that The Drowsy Chaperone will sweep the "musical" awards, but that show and I have not yet been properly introduced.
Posted by Vincent Vargas at 5:22 AM 1 comment: 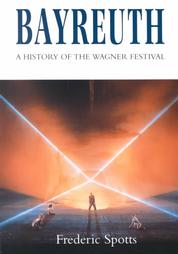 The book Bayreuth, A History of the Wagner Festival is one of the best written accounts of the history of this famous institution.

The operatic festival Richard Wagner founded in 1876 is the oldest and most famous in the world. It is also the most controversial, for it became the cultural showcase of the Third Reich. In this prize-winning and generously illustrated book--the first to provide a frank and fully rounded history of Bayreuth--Frederic Spotts describes the festival's performances and productions, the Wagner family who have run it. its debasement into "Hitler's court theatre," and its postwar liberation from its chauvinist, anti-Semitic past. Provocative and compelling, the book will fascinate all Wagner enthusiasts as well as those interested in European cultural and intellectual history since 1876.

Buy your copy of this book by clicking here.
Posted by Vincent Vargas at 7:07 PM No comments: