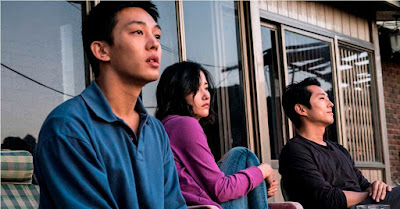 The film premiered at the Cannes Film Festival, it was a selection of the New York Film Festival, and it is South Korea's entry for the Best Foreign Language Film at the upcoming Academy Awards.
Posted by Vincent Vargas at 7:32 PM No comments: 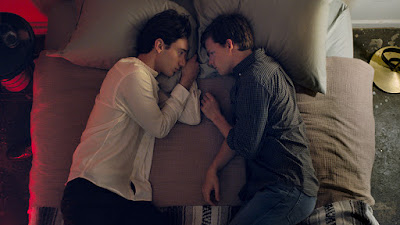 Boy Erased is not the first film this year to tackle the thorny subject of conversion therapy. This film, featuring three Hollywood A-listers, closely follows the themes of the recent indie The Miseducation of Cameron Post. The fact that big Hollywood is taking a chance on this controversial subject makes it a film worth considering, and certainly one that will be critically discussed as we head towards the end of the year, and awards season time. Especially since the film possesses heartfelt performances by all three principals.

When Jared, played by Lucas Hedges, a young college student, comes out to his parents, a Baptist minister (an almost unrecognizable, overweight Russell Crowe) and his wife, Nicole Kidman, they decide to enroll him in a program to cure him of his homosexuality. It’s a bit like the Joan Fontaine character in Hitchcock’s Rebecca, after she marries Laurence Olivier and enters gloomy, mysterious Manderley. When Jared steps inside the Love in Action program he enters the gothic, a Dickensian institution run by Mr. Sykes, a character with a Dickensian name that Charles Dickens himself might have had fun developing, since from a literary point of view he is only a stone’s throw from Mr. Squeers, the cruel headmaster in the novel Nicholas Nickleby. The fact that this film is based on a true story verges on the unbelievably tragic.

The secondary characters are as fully rounded as the leads. Mr. Sykes, played by Joel Edgerton, the director of this film, is a wondrous creation: a Bible-wielding mountebank who spouts salvation while hiding from everyone his true nature. Also wondrous, as well as scary is one of Mr. Sykes’s enforcers, played with sinister gusto by Flea of The Red Hot Chilly Peppers. There is also a memorable performance by Troye Sivan, the South African-born, Australian actor/singer, whose latest pop album, Bloom, is at the top of the charts. Mr. Sivan has a great screen presence, and one of the members of the cast who is openly gay. 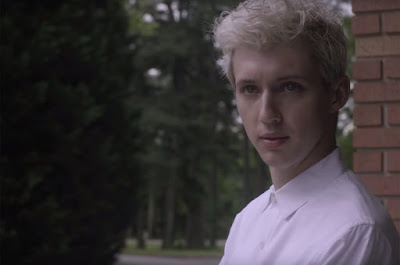 Although the film has many wonderful touches, it falls into a predictable pattern where the characters become recognizable figures verging on the stereotypical. So we get the young, questioning boy, who is far from being a slut, but who carries an incredible amount of guilt because of his feelings. There’s the understanding mother, and the unyielding father who just cannot come to terms with his son’s feelings. There’s also the clever boy who will play along with the conversion program just to get out of there; and regrettably there’s also the boy who is permanently scarred by the program’s abuse, and becomes its tragic victim.

Despite its artistic flaws, Boy Erased is a courageous step from mainstream Hollywood to expose a dubious system that thus far has effected 700,000 members of the LGBTQ community, and continues to be practiced legally in many parts of the country.
Posted by Vincent Vargas at 8:08 PM No comments: