Tomorrowland is Pure and Preachy Disney 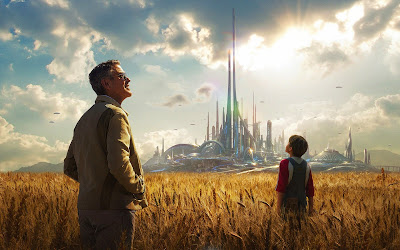 The basic premise of Tomorrowland, the new Disney film from director Brad Bird, is that half the world tries to build up Mother Earth in the morning, while the other half tears it down overnight.  Mankind has an incredible inventive gift that has led humanity to wonderful achievements, however we are a race that is also inherently bent on destruction, and this dark aspect seems to be taking over our current civilization.

The story begins in 1965 with the young Frank Walker (who will grow up to be George Clooney) who attends the New York World's Fair and brings with him a half-baked jetpack gizmo that he has invented. While being rejected by Hugh Laurie (who turns out to be the villain in the piece, a fact that you know right from his first appearance) he meets the mysterious child Athena (Raffey Cassidy) who introduces him, via a magical pin, to the world of tomorrow: a remarkable skyscraper city, half Fritz Lang's Metropolis, half modern-day Dubai, which ultimately is reminiscent of a 1950's conception of the future.  In other words, it reminds one of the sleek "Tomorrowland," one of the theme lands of Disneyland/Disney World.

The future, according to the gospel of Disney, is a clean-cut place with the kind of architecture that brings to mind the futuristic designs of the theme parks as well as the memorable structures of Spanish architect Santiago Calatrava. His amazing City of Arts and Sciences in Valencia, Spain, for instance, seems to be the blueprint for Scott Chambliss's production designs.

But the land of tomorrow is rotten from within: it is crumbling and heading into dystopic destruction. To set things right, Athena summons Casey Newton (Britt Robinson), a teenager who has been sabotaging the dismantling of a NASA launch pad near Cape Canaveral where she lives. Obviously this is a teen who cares about space travel, and in the logic of this film one of the good guys. Her meeting with Athena, who gives her one of the magical pins, is the call to adventure that sets her on a journey where she meets the older Frank Walker, now a grizzled, discontented George Clooney living in the sticks, in a run-down house filled with interesting futuristic gadgets. The meeting of Casey and Frank, the catalyst that will bring the narrative to a climax, unfortunately takes way too long to happen. At 130 minutes the entire movie feels too overproduced and definitely too long.

Watching Tomorrowland is very much like attending the future section of EPCOT.  The sense of optimism overwhelms you. Nothing wrong with that. Frank Capra built a career based on it, and so did Walt Disney! What I find a bit troubling are the constant self-references. The entire film is a Disney infomercial. The Pirates of the Caribbean franchise was based on a park ride, but the films, especially the first of the series, was so successful artistically that you forgot the shameless plug and you concentrated on the new myth the film was developing. No such luck with Tomorrowland, which looks to the future, but deep down is just interested in first week earnings.
Posted by Vincent Vargas at 1:32 PM No comments:


In his own words, Mad Men creator Matt Wiener could not believe that 150 people kept the ending to the show a secret. Well, make that 151. It was hard, but somehow I did it. It amazes me that this ending was in place in Matt's head right from the start of the series, and it managed to remain intact all the way to the end. It shows total knowledge of the character and the situations surrounding him in the drama. And by the way, keeping such a big secret, knowing me, takes amazing determination and will power! Never mind that I had to keep it for about five years.

But seriously, it was the best ending, the only ending possible to the series. It dashed away any gory hopes that Don Draper would end up a suicide, falling out of a building, his body descending in slow-motion, like the Vertigo inspired logo to the show.  Don has been falling now for many seasons, there was no need to belabor the point. The series ended with us inside Don's mind, as he dreams up what is arguably the greatest ad campaign for a product ever to come out of Madison Avenue. Bravo!
Posted by Vincent Vargas at 10:04 AM No comments: 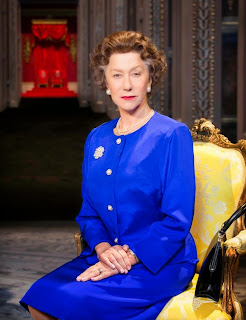 This is an evening of sheer artistry on Broadway.  A unique play where even the interval (or intermission, as we say in the States) has a very British atmosphere.  It is a not to be missed production, and  one of the big contenders for this year's Tony Awards.
Posted by Vincent Vargas at 11:00 PM No comments:

Balanchine and Stravinsky at the NYC Ballet 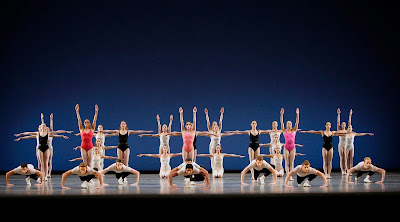 Last Saturday afternoon I attended the New York City Ballet. They performed four of the great Igor Stravinsky, George Balanchine collaborations: Apollo, Agon, Duo Concertant, and Symphony in Three Movements. These classic works, that collectively have come to be known as the "black and white" ballets, due to the fact that the dancers are costumed in primarily these two colors, are staples of this company, and are brought back year after year to the delight of seasoned ballet aficionados and young audiences coming to these works for the first time.

Apollo is the oldest of these ballets.  Stravinsky composed the music in 1927, and the twenty-four-year-old Balanchine choreographed it a year later.  A host of great dancers have passed through this iconic role throughout the decades. It is the only Balanchine creation that puts the male dancer on the forefront. The short video below features Chase Finlay, a NYC Ballet principal dancer, explaining his approach to dancing this role.


Duo Concertant is a unique creation that features two dancers as well as a pianist and a violinist, all on stage. The short work examines the equal relationship that exist (or ought to exist) between music and dance. The piece takes the musicians out of the pit and places them side by side with the dancers. Saturday's results also included an interesting juxtaposition between the seasoned age of the musicians versus the youthful quality of the dancers. I'm not sure if this was an original intention of Mr. Balanchine.

The performance concluded with the amazing Symphony in Three Movements, a hyper-kinetic Stravinsky composition from 1945 that on the one hand looks back to his atonal beginnings back with Sergei Diaghilev and The Ballets Russes and dares to look forward toward the future of music. Listen closely with your eyes closed, and you will hear the nervous minimalism of a John Adams.  However most ballet goers will not close their eyes especially when a dancer of the caliber of Amar Ramasar is dancing in it. Mr. Ramasar has been a soloist since 2006, and he was a principal dancer in Chichester Psalms, the Leonard Bernstein, Peter Martins ballet that I performed with the NYC Ballet when I was a member of the Juilliard Choral Union.

If you missed the black and white Stravinsky, Balanchine ballets this season, I would not worry.  I am certain that they will be performed again next year to the delight of young and old.
Posted by Vincent Vargas at 12:22 PM No comments: