An Excellent Elixir (without Villazón) 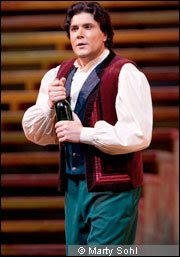 Rolando Villazón did not sing the broadcast of Gaetano Donizzeti's L'Elisir d'Amore at the MET yesterday afternoon. The official word is that the tenor is suffering from laryngitis, although many believe that the Mexican tenor is in the kind of vocal crisis which just might imperil next year's new dreamcast production of Les Contes d'Hoffmann. Already, earlier in the season he cancelled almost all of his appearances in Lucia di Lammermoor. Whatever is happening to him, it appears to be quite serious, and he is taking care of himself by staying away from the stage and resting his voice. Although he is disappointing fans right and left, medically he is doing the right thing. It has been a season of cancellations and cast changes at the MET, and the absence of one of our generation's most sought-after tenors puts a damper on the final weeks of the MET's season.

In any case, the MET went on with the show yesterday afternoon, and a pretty good show it was. In many ways, one of my most satisfying afternoons at the opera this season. Filling in for Mr. Villazón was Massimo Giordano who sang a lusty, oversized Nemorino. He is a husky man with a big voice to match: not my ideal sound for this sweet bumbling character, but his singing was secure from top to bottom. Angela Gheorghiu was the feisty Adina, and the soprano sang with the kind of vocal confidence that makes the character a believable three-dimensional entity. Often, throughout the afternoon, her singing achieved a beauty of sound that we rarely get these days. Her notes above the staff, in particular, were vocally strong and rather memorable.

I thought that Franco Vassallo sang a very nice Sergeant Belcore, although throughout the afternoon he seemed to be singing to the broadcast microphone. I really wonder if he was heard up in the upper reaches of the house. As Doctor Dulcamara, Simone Alaimo avoided the old basso-buffo excesses of past performers. For instance, he did not intone an old man's voice in the Act II duet with Adina ("Io son rico, e tu sei bella..."), a tradition that I have never liked, and which I found a good directorial choice for this performer. However, I really wonder if these kind of characters, when played more naturally and less cartoonish, achieve the kind of comedy that they were meant to achieve in the first place.

The John Copley production, with sets by Beni Montresor is serviceable. But I still miss the old production that featured Doctor Dulcamara arriving and leaving the village via a hot air balloon à la Wizard of Oz.

I hear that Rolando Villazón is due to return to this production this week. If he does return, let's see in what kind of vocal shape he arrives.
Posted by Vincent Vargas at 1:44 PM 1 comment: