The 2020-2021 Metropolitan Opera season sounds very exciting. It will open with a new production of Aida. This is a risky move by General Manager Peter Gelb and the company since the current production of this work is one of the grandest, and as a result one of the most popular productions in the house repertory. Lately, however, the production has been mostly populated with singers who are either up-and-coming, or who have been up and down the Nile one too many times. The MET will rectify that with a stellar September 21 Opening Night cast that features Anna Netrebko in the title role, Piotr Beczała as Radames (he will try out this role in the Festival Castell Peralada, Catalonia Spain in August of this year a month before the MET opening), and Anita Rachcelishvili as Amneris. Opening night will also serve as the official debut of conductor Yannick Nézet-Séguin who will become the MET's new music director.

Another debut which promises to be interesting and, no doubt, controversial is the much anticipated house debut of director Ivo van Hove helming two productions: Mozart's Don Giovanni, a staging that the MET shares with the Paris Opéra, and Jake Heggie's Dead Man Walking, based on the novel by Sister Helen Prejean, both conducted by Mr. Nézet-Séguin.

Perhaps the most challenging debut next season is that of Barrie Kosky. Mr. Kosky, who hails from Australia and calls himself a "Jewish gay kangaroo" is no stranger to European theaters where his productions have entertained and have added to the polemic of Regietheater. At Bayreuth, his entertaining and controversial production of Wagner's Die Meistersinger, which focuses on the antisemitic aspects of the work, drew boos from a segment of the audience at its opening night. I have seen this production twice, once in its debut year and again the following year. Boos were heard during my second visit to this interesting vision of the work. At the MET, Mr. Kosky will direct a rare Sergei Prokofiev work called The Fiery Angel. The staging, which comes from the Bavarian State Opera, features the chorus dressed as Jesus, complete with bloody crowns of thorns as well as a devil with a dildo. As critic Michael Cooper wrote in the NY Times "Zeffirelli's Boheme this isn't." Here is a preview of this staging.

An interesting change to the calendar is that the MET will close its doors during the month of February, traditionally a period when audiences tend to stay home, and the company ends up losing money. The season will be extended up to June 5 cutting into the traditional American Ballet Theater season.

It promises to be a very exciting season, and perhaps this might be the right time when New York's conservative audiences finally accept Mr. Gelb's tireless crusade to bring the MET to the 21st century. The MET has been notoriously lagging behind in comparison to the great European houses when it comes to presenting works by visionary, avant-garde directors. Older audiences, as well as the MET's own Board of Directors and patrons, have been reticent to spend money on productions that may not be popular because of the new approach they take to beloved works, and those other works that have become very popular older productions. Luminaries of Regietheater not likely to be seen at the MET in the near future include iconoclastic Catalan director Calixto Bieito. His proposed La Forza del Destino was cancelled. Stefan Herheim's clever Die Meistersinger, which was first staged at the Vienna State Opera, was also cancelled.

Will the MET ever get rid of their popular cash cow Franco Zeffirelli Boheme? Not in the cards thus far, but you never know. I never thought their Aida would go. Now we look forward to a new staging. Let us see how the New York crowd reacts to this major leap forward.
Posted by Vincent Vargas at 1:00 PM No comments: 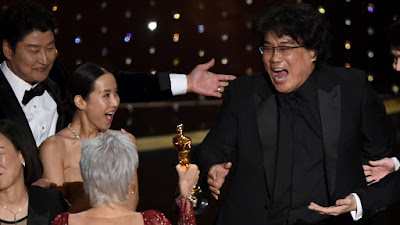 Last night, at the 92nd Oscar ceremony, the film Parasite did something no other film had done in the history of the awards. Bong Joon-ho's magnificent thriller was the first to win the International Film category, as well as taking home the Best Film Oscar. Last year Alfonso Cuarón's film Roma, a Netflix production, was also nominated for both, but it failed to win both awards, ending up only with the International Film statuette. Mr. Bong also won in the Best Director category. In his thank-you speech, which he spoke in his native Korean, he thanked Martin Scorsese, who has been an inspiration to the young filmmaker. It was a wonderful example of a relatively new filmmaker thanking the established, older director. This is the first Oscar win for South Korea.
Posted by Vincent Vargas at 5:33 AM No comments:

West Side Story at the Broadway Theatre 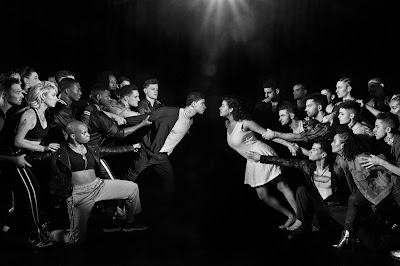 In Ivo Van Hove's recreation of West Side Story it's not always easy, at first, to tell the Jets from the Sharks. Each gang is now racially mixed, all are heavily tattooed, and show off some kind of distinctive bling around their necks. As they stand at the apron of the stage at the start of the performance, and sway to the right and to the left, these gang members share the look with MS-13, the Bloods and the Crips rather than with the original teen hoodlums Arthur Laurents had in mind when he adapted Romeo and Juliet and placed it in New York's dangerous San Juan Hill neighborhood, the very place where today Lincoln Center stands, and where Robert Wise shot the 1961 film adaptation of this 1957 Broadway musical. Gone also is the Jerome Robbins choreography, in favor of an even more acrobatic style, thankfully still rooted on ballet, by Anne Teresa de Keersmaeker. You won't find any finger snapping here to signify they are hip cool cats. Far from it. These are dangerous individuals you do not want to meet on a dark New York street.

The Ivo Van Howe treatment is well-known by now: minimalism married to dazzling technology, often using HD video. On Broadway he has re-thought Arthur Miller's A View From the Bridge and The Crucible, as well as last year's dazzling rethinking of Paddy Chayefsky's screenplay  Network starring Bryan Cranston. This time, with a cast made up of mostly young unknowns, he has re-thought this classic musical in ways that often delight us, as well as confound us. The music is still Leonard Bernstein at his finest, minus the song "I Feel Pretty," cut, I presume because it slows down the action. (So does the aria "Un Bel Di" in Puccini's Madama Butterfly). I get the feeling that it's out because of its inherent kitschy feeling. The production also plays in one single act nearing two hours. This is a no-nonsense, tight production, as serious and as stark as a Greek tragedy. No laughing aloud. I'm surprised "Gee, Officer Krupke" remained intact, although it has lost some of its comedic values given the seriousness of Mr. Van Hove's approach. Luckily "America" still works as a marvelous example of great music and witty lyrics by the then young Stephen Sondheim, the only surviving member of the original creative team. 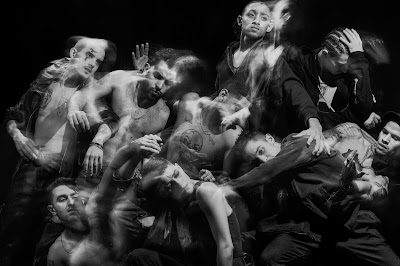 During the 1980's many of the classic shows of the 1950's and 1960's were revived, often with the same orchestrations as well as the same scenic conceptions. In fact, many of the original stars of those shows came back to reprise their past triumphs. Carol Channing in Hello Dolly, Rex Harrison in My Fair Lady, Zero Mostel in Fiddler on the Roof and Richard Burton in Camelot. Yul Brynner made a cottage industry out of The King and I, reviving it over and over again, even as he was dying of cancer. And, of course Jerome Robbins returned to Broadway to direct West Side Story in 1980, using the same scenic, lighting and costume designs employed in the original production. While the world of musical comedy remained stagnant, opera was being rethought in Europe. The 1976 version of Richard Wagner's Ring of the Nibelung at Bayreuth by Patrice Chereau led the way for experimentation in the lyric theater. The practice is very much the current trend. Depending where you stand it's either "Regietheater" (theater of the director) or "Eurotrash."

What is dazzling in this production is the use of HD cameras. The live feed is projected upstage, behind the playing area, on a huge screen that captures the characters up close. It is like watching a movie and a theater piece all at the same time. The camera is vital to the production. The two main sets, Doc's candy store and Anita's sweatshop,  dressed in hyper-realism by Jan Versweyveld (Mr. Van Hove's partner), are upstage with nooks and crannies out of the audience's view. However, the camera follows the action inside these hidden corners and broadcasts it to us revealing the amazing detail. Why these theatrical settings are pushed out of the way, and only allowed to be seen through the camera lens is one of the questions we must ask the creative team.

Ultimately, the real important question we must ask ourselves is if a musical like West Side Story is able to successfully navigate the world of "Regietheater" and still emerge unscathed. Save for a major incongruity: 1950's lingo sputtered by a crowd that looks and behaves more at ease in the hip-hop hood, the answer is a resounding yes. My feeling is that Broadway audiences will accept this modernization of a treasured warhorse as long as the performances are of such amazing caliber, especially Dharon Jones as Riff, and Isaac Powell (who is back after he injured himself during previews) as Tony. Over on the Shark's turf, the dancing mastery of New York City Ballet's Amar Ramasar (with whom I shared the stage years ago when we performed another piece by Bernstein, Chichester Psalms), as well as the talented Yesenia Ayala as Anita and Shereen Pimentel as Maria bring fresh approaches to these characters.

The production should have opened last Thursday, but due to Mr. Powell's injury the official opening is now February 20th. Now Mr. Powell is back and sounding wonderful, especially in his two main songs "Something's Coming" and the ever popular "Maria."

Whatever you think of this approach towards classic musicals, this is a major revival by some of the most talented creative minds working today. Their aim is to bring a breath of fresh air to a wondrous piece of our creative past. By doing so, they revitalize the theater and bring a masterpiece to a new generation of audiences that will be as thrilled as those lucky enough to have been at the Winter Garden Theatre back in 1957. What is now running at the Broadway Theatre is a West Side Story for 2020 and beyond.
Posted by Vincent Vargas at 8:47 AM No comments: