The Metropolitan Opera announced this week its 2012-2013 lineup. It features exciting new productions, a totally new work, and a a good crop of revivals. Sadly, nowhere in sight, is there a mention of James Levine's name. Fabio Luisi has taken over all of Mr. Levine's duties, although Mr. Levine continues to be the MET's official music director. This will be the first time since he joined the MET in 1971 that Mr. Levine will not be conducting anything at the house.

Once again, Peter Gelb, general manager of the MET, is presenting us with a batch of new productions that will challenge New York's essentially conservative view of opera. Michael Mayer's new Rigoletto places the action in 1960s Las Vegas. Not too surprising a turn if we remember that Mr. Mayer staged Broadway's Spring Awakening a few years ago. The season, however, will open with what promises to be a more crowd-pleasing offering: Bartlett Sher's new take on Gaetano Donizetti's L'Elisir D'Amore starring Anna Netrebko.

In celebration of Giuseppe Verdi's birth bicentennial the 2012-2013 season will be rich in Italian opera. There will be a new production of Un Ballo in Maschera by David Alden, and a new production of Donizetti's Maria Stuarda by David McVicar. the trilogy of Tudor-era works was foreseen by Peter Gelb as the perfect vehicle for Anna Netrebko to sing the three queens. However, Ms. Netrebko has vowed out of Maria Stuarda (and 2013-2014 Roberto Devereux) and Joyce DiDonato is scheduled to sing the title role in Maria Stuarda this year. Director McVicar is scheduled to direct all three works using different production teams. In addition, Mr. McVicar will bring his new modern dress production of Handel's Giulio Cesare, from Glyndebourne starring David Daniels and Natalie Dessay. The other Verdi operas to be presented include Aida, conducted by Fabio Luisi, Don Carlo, led by Lorin Maazel, La Traviata, with Plácido Domingo taking the baritone role of Germont, his second at the house after Simon Boccanegra, and the Verdi celebration will conclude with the MET's current production of Il Trovatore.

The other two new productions are The Tempest, a new work by composer Thomas Adès, in a new production by Robert Lepage (who brought us the current Ring production), and a much-awaited new production of Richard Wagner's Parsifal by François Girard. This production will have its premiere at the Opéra De Lyon in March. Here at the MET, the production will feature Jonas Kaufmann in the title role, and it will be conducted by Daniele Gatti, who has conducted the work for four consecutive summers at the Bayreuth Festival.

The MET will bring back some of its most spectacular production, namely Poulenc's unforgettable Dialogues of the Carmelites and Berlioz's mighty Les Troyens, two works that have not been heard at the house in quite some years. These, together with three rounds of Mr. Lepage's Ring of the Nibelung and a Christmas production of The Barber of Seville promises a very rich opera season. If you would like to browse the season further click here.

Posted by Vincent Vargas at 1:07 PM No comments: 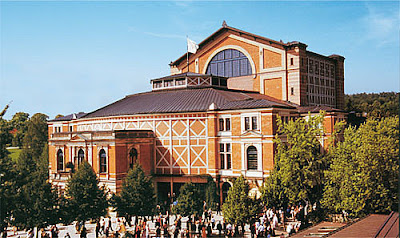 After being on the waiting list for about nine years, which of course felt more like nine centuries (there's an Italian bel canto line if I've ever heard one), I have been selected to buy tickets for the Bayreuth Festival this summer. I'll be at Bayreuth from August 6 -12, and will be attending performances of Tristan und Isolde, Lohengrin, Tannhäuser, and Parsifal.

A mixture of emotions is going through my head. The realization that I am going to the shrine, to the holy musical place revered by some, hated by others: a place that often elicits emotions as grand as the very works that are presented there. I'm going to the Mecca of Wagnerism, in a town in northern Bavaria that has been coming alive for a month, year after year, since 1876 with the music of just one man. Certainly the most cultured town in Upper Franconia, certainly the most cultured company town along the Roter Main.

I'm looking forward to this first visit, and what intrigues me the most is experiencing that Bayreuth sound and that Bayreuth acoustic everyone talks and writes about.

A few years after Richard Wagner's death Mark Twain visited Bayreuth. This is how he described his first time: the moment when the music first starts inside the famous auditorium:

"Finally, out of darkness and distance and mystery soft rich notes rose upon the stillness, and from his grave the dead magician began to weave his spells about his disciples and steep their souls in his enchantments. There was something strangely impressive in the fancy which kept intruding itself that the composer was conscious in his grave of what was going on here, and that these divine souls were the clothing of thoughts which were at this moment passing through his brain, and not recognized and familiar ones which had issued from it at some former time."

Robert Lepage's Götterdämmerung at the MET 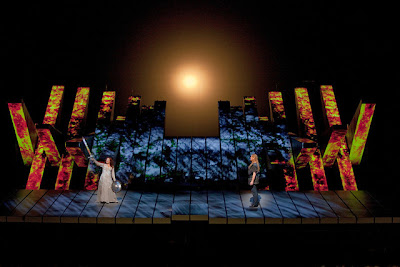 Robert Lepage's Metropolitan Opera Ring of the Nibelung has finally come to a conclusion with the unveiling of Götterdämmerung, the last music drama in Richard Wagner's mighty trilogy. Readers of this blog, and those who have been following the Peter Gelb years at the MET, are probably aware by now that the crux of this production revolves around a 45 ton 24 plank behemoth known simply as "the machine," a complex mechanical apparatus that twirls into different shapes and intricate formations, while hyper-realistic projections are shone on its planks, thus creating environments that oftentimes react to the singers' voices and movements. The machine is the perfect metaphor for the one major fault in the conception of this production: on the one hand the gizmo is a marvel of up-to-date technological stagecraft, and at the same time it is a clunky and noisy piece of 19th century machinery.
And like the machine, the production is of two minds: half conservative and wanting to please the MET Old Guard with the moneybags, and half radical and innovative, and hungry for younger audiences that will hopefully keep the MET afloat in the years to come. When Peter Gelb was guest of honor at the Metropolitan Opera Club a year before the unveiling of this production he was asked if the new Ring would take place in mythological times and he assured the club that it would. He did not tell a lie. Once the machine arranges itself into place, the scenes that it creates are quite traditional. The problem is not the machine's ability to create beautiful settings, it is the machine itself. And it is not just the critics that object to this dychotomy. MET audiences are not buying that the end justifies the means. On opening night of Götterdämmerung, Lapage and his creative team were once again booed, as they were last year when Das Rheingold's rainbow bridge failed to work. I'm not sure if the booing came from the Parterre or from the Family Circle, but one thing is clear: the outburst that followed Götterdämmerung seemed not to be directed just at the final opera, but at the whole conception of the tetralogy.
These days solid, across-the-board Wagnerian singing is hard to come by, and modern audiences seem to have accepted this. This Saturday afternoon the performance of Götterdämmerung featured some stellar singing from Waltraut Meyer in her sole scene as Waltraute, and from Hans-Peter König, whose dark, cavernous and nasty Hagen brought Golden Age singing back to the MET. Also fairly strong were Wendy Bryn Harmer as Gutrune, as well as Iain Paterson as her brother Gunther. Eric Owens, who scored a triumph as Alberich in Rheingold, was back reminding his son Hagen of their rightful ownership of the ring. Mr. Owens's voice sounded a bit tired this time around, and he resorted to a hint of the Bayreuth bark in his scene.
Deborah Voigt's recent vocal problems have no doubt been precipitated by too many journeys down the Rhine. Her choice to sing Brünnhilde was a brave one, and at the same time the logical role to take on at this point of her career. The results have been mixed. Her voice lacks luster, and is devoid of much warmth these days, and without these the role of Brünnhilde fails to be complete. Jay Hunter Morris, as Siegfried, got through the role, and actually improved as the afternoon went along. His heldentenor voice is strong and able to ride above the crowded pit, but the quality of his instrument is not too appealing, and ultimately he produced some sharp ugly sounds along the way.
The chorus, an absent commodity in the rest of the Ring, is a very vivid presence in Götterdämmerung, and it sang with incredible power and masterful diction. At times, I thought it sang too loudly, though, seemingly starting at fortissimo and increasing in volume from there. However, their sound managed to stay solid and impressive, making the vassals scene and the welcoming of Brünnhilde and Gunther the show stopper that it should be.
Fabio Luisi has taken over the Ring from the ailing James Levine. It is too early yet to make an objective decision as to his conducting. The orchestra still seems to be in Levine-mode, and Mr. Luisi seems to like that just fine. There were a few uneven entrances from the brass section, but overall, the orchestra handled this huge score with its usual expertise, producing some luscious, incredibly beautiful sounds. We might get a wonderful Italianate Ring a la Toscanini from him in the future, and I am sure that by the time the MET mounts its three Ring Cycles towards the end of the season, Mr. Luisi's interpretation will be in place.The end of Götterdämmerung should wow an audience. This is when every production team and every opera house has a chance to pull out all the stops. Unfortunately, this production doesn't even come close. Though it is nice to see Grane, Brünnhilde's steed back in the Ring, this particular nag looked like a reject from the production of War Horse next door, and not the noble horse that once upon a time flew around with a Valkyrie on its back. Then the fire that consumes the world looked digitized, fake, and ultimately quite cold. The very last image of the production: an empty machine surrounded by thick clouds of fog was somewhat memorable -- but only because deep down I wanted the machine to just die and never rotate, twirl, or do any other production aerobics ever again.
Posted by Vincent Vargas at 2:08 PM 5 comments: