On Broadway: GARY: A SEQUEL TO TITUS ANDRONICUS 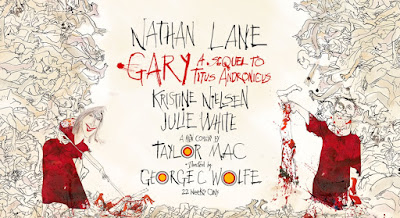 Titus Andronicus has not fared well in the modern era. William Shakespeare's first tragedy (co-written, it is believed with George Peele) was immensely popular in its day -- the Elizabethans had a ferocious taste for revenge plays. However in the Victorian era it fell out of favor due to its excessive violence. The 20th century did not improve the play's lot, and to this day it is considered one of the least important efforts by the Bard.

What can you do with it, then? A much maligned, over-the-top Shakespeare revenge tragedy of dubious authorship. You can try to produce it straight and try not to get laughs from nervous audience members reacting to the exuberant violence. You can dismiss it, of course, and concentrate on the masterpieces of the canon. Or you can laugh it off and lampoon the freaking thing. This is more or less what playwright Taylor Mac (who uses the term “judy” as a gender pronoun) has done with his wickedly uproarious Gary: A Sequel to Titus Andronicus, opening tomorrow night at the Booth Theatre, and starring Nathan Lane, Julie White and Kristine Nielsen. This show should have opened in May, but it extended its previews after actress Andrew Martin suffered an injury during rehearsals, and had to withdraw from the production.

On a stage filled with piles of bloody corpses, more funny than gross, three characters, a clown, a chairwoman and a midwife re-enact the bloody deeds of the play, reminisce on how they managed to survive the massacre in Act V, and ponder life’s many mysteries and conundrums. It’s a clear Samuel Beckett situation, but played to slapstick perfection by the three principles. The humor is always coarse, relying on fart jokes and necrophilic shtick. High comedy it is not, but the again Titus is nowhere near the same league as Hamlet. Bathroom humor, therefore, is the right counterpart to its Elizabethan inspiration.

If Taylor Mac’s play wanders, and sometimes descends into the lower depths of taste, the three actors are there to salvage it. Mr. Lane, who recently appeared in epic serious dramas (The Iceman Cometh and Angels in America) returns to the genre for which we know him best. As the clown Gary, he seems to be aware of the pecking order of Shakespearean roles. He is a hopeless clown (he juggles pigeons who fly away) but he tells us that one day he dreams of ascending the Elizabethan "Dramatis Personae" ladder and become a Fool, like King Lear’s wise companion. Likewise Ms. White and Ms. Nielsen are shattered characters that survive life by grit and a hopeless hope belief that one day things will improve. The play couldn't be darker if it wanted to be, but amid the carnage a ray of hope (reminiscent of the conclusion of Akira Kurosawa's great film Rashomon) sends us home once again assuring us of the inherent goodness of mankind.
Posted by Vincent Vargas at 4:37 PM No comments: