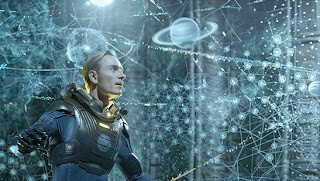 When is an expected prequel not a prequel? When director Ridley Scott decides to revisit his classic 1979 film Alien.  The director is back laying down new mythology, and delving into one of the film's most famous but unexplained images: a giant mummified space traveler sitting at the controls of an alien ship.  Originally, this was a monumental prop, hand-crafted by Swiss artist H.R. Giger, whose imaginative work earned him an Oscar for Visual Effects for his nightmarish visualization of the Alien universe that eventually became a lucrative Alien franchise.  With his new film, Prometheus, director Scott aims to flesh out the backstory of this mysterious being (who among the cognoscenti is known as "the engineer.") by borrowing imagery from his original work and mixing in a story line inspired from Ancient Aliens, the History Channel show that proposes that UFOs visited Earth, engineered the construction of our ancient monuments, and mated with prehistoric man in order to advance our species.

In Greek mythology the Titan Prometheus stole the sacred fire from the gods and brought it down to human beings.  In a short prelude in Scott's new film a titanic-sized engineer, who has traveled to Earth, commits suicide by hurling himself into the flowing waters of prehistoric Earth, thus seeding his DNA with its future inhabitants.  Millions of years later, the ship "Prometheus" is on its way to the furthest reaches of space.  Aboard, a Christian cross-wearing archeologist Elizabeth Shaw (Noomi Rapace -- the Girl with the Dragon Tattoo in the Swedish film version of the novel) and her boyfriend Charlie Holloway (Logan Marshall-Green) are on the journey to prove that the origins of Mankind might be found in alien intervention.  Also aboard are a motley crew (most of whom remain throughout the film as two-dimensional stock characters) headed by mission director Meredith Vickers (Charlize Theron) and an android named David (Michael Fassbender) who is a polyglot who combs his synthetic hair and mimics Peter O'Toole's lines from the film Lawrence of Arabia. A cute post-modern touch that unfortunately is never developed and goes nowhere.

Soon enough, Prometheus reaches the planet moon LV-223 and the crew finds itself at peril inside a mysterious structure filled with dead alien bodies, dark gooey liquid, a severed head, and snake-like creatures.  One by one the crew is either infected or eliminated.  The doomed Charlie impregnates Elizabeth who then soon realizes that she is carrying an alien fetus.  In one of the horrific highlights of the film, she enters a do-it-yourself futuristic surgical machine and gives herself a bloody late-term abortion (which is referred to in the film as a Caesarian section, I imagine so as not to offend the Christian right).

The best thing the film has going for it is the 3D cinematography by Dariusz Wolski.  Scott has always been a keen visual director, and Mr. Wolski has provided him with a palette of muted colors and sharp details that tell the story in a very compelling way, with the 3D taking a subtle backseat this time around.  For best results see it in IMAX.

If you partially turn off your brain for two hours and nine minutes, the movie reaches a fair level of excitement.  But this is the kind of summer product made for an audience that throughout the years has embraced and scrutinized a popular geek franchise.  In other words, fanboys (and girls! -- thanks to Sigourney Weaver's Ripley the Alien tetralogy has always been big with both sexes) that live to analyze every frame of the previous films.  It becomes very clear after watching Prometheus that this latest addition fails to stand up to such scrutiny, and it is arguably doubtful if it deserves a place in the Alien pantheon.
Posted by Vincent Vargas at 12:11 PM No comments: