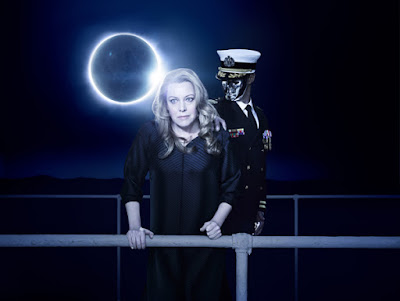 The Metropolitan Opera will open next year's 2016-2017 season, celebrating the company’s fiftieth anniversary at Lincoln Center, with a new production of Richard Wagner's Tristan und Isolde, and will go on to present the premiere of Kaija Saariaho’s 2000 opera L’Amour de Loin, as well as new stagings of Rossini’s Guillaume Tell, Gounod's Roméo et Juliette, Dvořák’s Rusalka and Strauss's Der Rosenkavalier.

The season will open on September 26, 2016 with a production of Tristan und Isolde conducted by Sir Simon Rattle and directed by Mariusz Treliński.  Soprano Nina Stemme, who in a few weeks will sing the title role in the new Patrice Chéreau production of Elektra, will join Stuart Skelton as Tristan; Ekaterina Gubanova as Brangäne, and René Pape will sing the role of King Marke.

Here is Mariusz Treliński on his new production of Tristan und Isolde.


Posted by Vincent Vargas at 11:47 PM No comments:

Antonin Scalia dies while a child murderer is on the prowl! 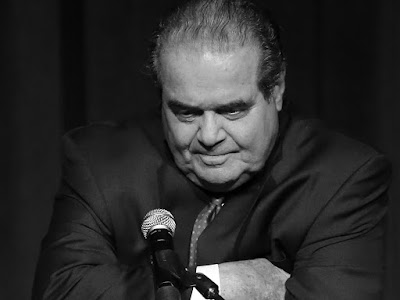 I learned of the death of Antonin Scalia while sitting in theater 2 at The Museum of Modern Art (MoMA) waiting for a showing of the film El Vampiro Negro (The Black Vampire) to begin. The 1953 Argentinian film, recently restored by UCLA, was inspired by Fritz Lang's seminal film M, the story of a deranged serial killer on the prowl, murdering the hope of the future: the children of a claustrophobic, Expressionistic metropolis. The South American film, directed by Román Viñoly Barreto, and starring a very creepy Nathán Pinzón, forgoes Lang's often detached approach and gets down to a very typical, and very melodramatic take on the tale of the Vampire of Dusseldorf. It is a gritty film, complete with wondrous film noir cinematography by Aníbal González Paz, which takes us from dirty sewers (perhaps a homage to Carol Reed's The Third Man) to seedy nightclubs to the stately steps of a criminal courthouse and right inside an ornate court room where this child murderer is being tried by a group of judges. I could not stop thinking of Justice Antonin Scalia. 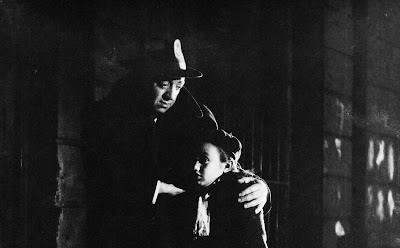 Nathán Pinzón is no Peter Lorre, the star of Lang's film, but he is excellent at portraying a deranged mind, perhaps once brilliant, but now unable to control himself. Director Viñoly Barreto and screenwriter Alberto Etchebehere supply the character with a fully-rounded back story worthy of the German film. Teodoro Ulber, is just as deranged as Hans Beckert but he can also be as gentle as a lamb; in particular when he is teaching English in front of his students who call him "El Profesor." He is quite fond of classical music as well. His whistling of Edvard Grieg's "In the Hall of the Mountain King" however is melodic, on-pitch, and lacking the breathy off-key obstinacy heard in the German film (Lang himself whistled the famous tune when he found out that Lorre did not know how to put his lips together and blow). Ulber's take on Grieg's tune even has a melodious tango lilt. What is remarkable about the Argentinian film is that it adds up to be a portrait of an exceptional mind gone terribly wrong. 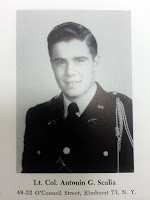 Justice Antonin Scalia was valedictorian at Xavier High School, graduated first in his class at Georgetown University, and was magna cum laude at The Harvard Law School. Although educated by the Jesuits, in a recent 60 minutes interview on CBS he denied that his logical mind was molded and shaped by the religious order which provided his high school and college education. His association with his high school Alma Mater, a military academy when he graduated in 1953, was severely affected when, during the height of the Vietnam War, the school decided to make the once mandatory JROTC military program optional. Thereafter, he often refused to attend alumni gatherings, although the school honored him by naming him to its Hall of Fame. In 2011 a group of JROTC students at Xavier invited him back to his school, and he accepted the invitation, speaking at a JROTC award ceremony. He was clearly unhappy that his old school had abandoned the military program, but he chose to remain faithful to those students that had chosen to be part of the program with which he had been involved during his four years at the school.

When I left the screening of El Vampiro Negro and ventured out into a New York night pounded with below zero wind chills, I thought of Justice Ruth Bader Ginsburg, who had lost her major adversary on the bench, but also her best friend and classical music buddy: they often attended operas and concerts together after the day was done, and they had hung up their justice robes. How many times did they listen to "In the Hall of the Mountain King" together, I wondered? And then, as my face was slowly getting numbed  by the cold weather, my mind slowly turned to Henri Becque's almost forgotten 1882 realist play The Vultures (Les Corbeaux), where the family of a deceased man hover around his decaying body in a bitter struggle for his inheritance. At that point, I knew the winter months would last for a long, long time.
Posted by Vincent Vargas at 1:35 PM No comments: