Tom Cruise in a reboot of The Mummy 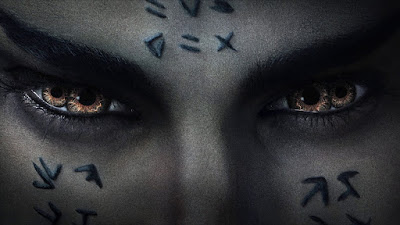 At the beginning of The Mummy a supposed Egyptian proverb appears on the screen asserting that we never die, but assume new forms and keep on living. I'm not sure if I agree with this bit of mumbo-jumbo, but if it were true I would have suggested that Universal track down the current living incarnations of Boris Karloff, Karl Freund, and Jack Pierce (the star, director and make-up artist of the 1932 Universal classic), and perhaps this movie might have had a chance to succeed. Helmed by Alex Kurtzman, written by at least five credited writers, and starring a miscast Tom Cruise, this current reboot is a mess.

Since apparently you can't keep a good mummy buried, in this go-around Karloff's original Imhotep has transgendered into pharaoh's daughter Ahmanet (Sofia Boutella), a dangerous girl with mysterious tattoos and a notion that Tom Cruise is her long-lost lover.  In her quest to recapture her rapture, she engineers a number of nasty events including a spectacular airplane crash, perhaps the highlight of the film.  It's all downhill from here as Ahmanet's kiss of death turns a number of mortals into her evil zombie minions. Most of them look sore that they landed in this turkey and not featured in the next season of The Walking Dead.

What really stinks about this reboot is that this film is merely an introduction to a new universe. Does every popular film coming out of Hollywood these days have to be pigeon-holed into an imaginary universe?  Apparently, the answer is yes.  Universal's answer to Marvel and DC is to resurrect their monster intellectual properties from the 1930s and re-vamp them into a milieu called Dark Universe. Hence the unnecessary appearance in this film of Russell Crowe as Dr. Jekyll and his doppelgänger Mr. Hyde, a monster who, curiously enough, was never a part of the Universal family, and whose greatest appearance was for Paramount Pictures in Fredric March's Oscar winning pre-Code classic.

I will end this review with A.O. Scott's insightful comment about this movie in the New York Times.  "It will be argued that this one was made not for the critics but for the fans. Which is no doubt true. Every con game is played with suckers in mind."
Posted by Vincent Vargas at 2:29 PM No comments: