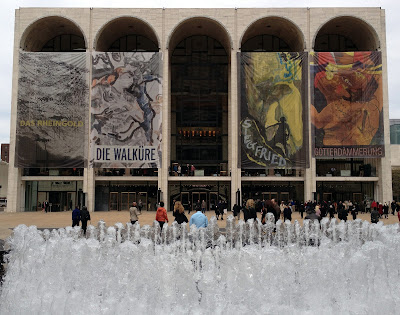 The Metropolitan Opera orchestra, under Fabio Luisi played flawlessly as usual this very difficult score.  We are so lucky to have such an incredibly fine ensemble playing every night in New York City.
Posted by Vincent Vargas at 7:49 PM No comments: 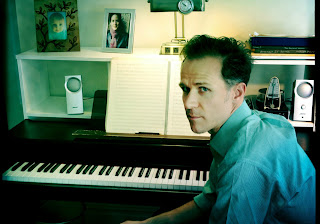 For more information about Raymond Lustig and his music, visit his website: RaymondLustig.com.
Posted by Vincent Vargas at 11:39 PM No comments: 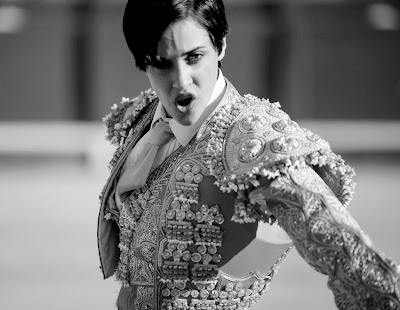 If you are a Spanish filmmaker and you are going to update Snow White and the Seven Dwarves you might as well pull all the stops and set the classic fairy tale in 1920s pre Civil War Andalucia.  That's where director Pablo Berger takes us in his film Blancanieves, transporting us right to the middle of sun-drenched Seville amid the heat of the bullfight and the clamor of flamenco. And to make it even more timeless, he reaches back to the early days of cinema and presents the story as a silent film, in beautiful black-and-white.

Under Berger's direction, Snow White becomes a grotesque tale of the sword and the cape set to the driving rhythms of the earthy but elegant gypsy music that gives Southern Spain its soul and passion.  Snow White, here called Carmen is the daughter of famous torero Antonio Villalta (Daniel Giménez Cacho) and a flamenco singer from Seville's Triana neighborhood.  On a sunny day in the bullring, the matador ably disposes of the first five bulls, but the last one, named Lucifer, savagely gores him, leaving him incapacitated for life.  His pregnant wife gives birth to Carmen prematurely, and dies in the process.  Thus the little orphan is left to be raised by the grandmother (Angela Molina) who teaches young Carmen the ways of the gypsy dance, and thus maintains the spirit of her mother alive.  Meanwhile, the bullfighter's gold digging nurse Encarna (Maribel Verdú) marries him and keeps him a virtual prisoner in his own house as she transforms herself into the evil lady of the manor -- a scarier Evil Queen I have not seen!  When the grandmother dies in the middle of a flamenco dance on the day of Carmen's first communion, Encarna sends for the little girl and, like every twisted fairy tale stepmother, drives Carmen into a Cinderella-like slave existence.

Eventually, director Berger remembers that this is Snow White, so the little girl grows up to be the fairest of them all: Macarena García.  The evil stepmother sends her henchman to kill her, but she survives the attack only to be revived by a troupe of midget bullfighters: an inspired idea that mixes Buñuelian imagery with Tod Browning's horror classic Freaks.  Eventually, under the tutelage of her little friends, Carmen becomes a lady matador, gains notoriety by performing in small dusty towns, and eventually gets a big contract to come back to Seville, the mecca of bullfighting, where her father almost lost his life.

From here on, it's a short road to a poisoned apple, a glass coffin, and the kind of ending that draws from the original fairy tale while deviating from it in a most melodramatic way.  Mr. Berger's final shot, offers an unexpected touch of the poet that may not be totally in keeping with the rest of the film.  It is the kind of conclusion that leaves audiences with a veil of satisfaction that hides the disturbing darkness beneath.
Posted by Vincent Vargas at 1:26 AM 1 comment: