Lulu at the Metropolitan Opera

Alban Berg's last, unfinished opera Lulu (completed by composer Friedrich Cerha in 1970) came back to the Metropolitan Opera last week in a new production by William Kentridge. Arguably the greatest and most famous work to emerge from the so-called serialist, twelve-tone compositional system devised by Arnold Schoenberg, the work is based on two plays by Frank Wedekind that relates the rise and fall of a black-widow siren who seems to violently terminate the life of any man that comes into her orbit. It served silent film star Louise Brooks with her greatest vehicle in G.W. Pabst's Pandora's Box.

The complete Lulu was first presented at the MET in 1980 with Teresa Stratas taking on the challenging title role and James Levine conducting the angular, expressionistic, taxing score: a musical revelation for those of us that were lucky enough to be present at those performances. In this go-around, Mr. Levine was supposed to take up the challenge of conducting once more, but unfortunately it seems that his failing health has not allowed him to do so. I'm not sure if given his current health issues he would be able to take up the challenge of conducting this complex work. Last month I noticed that his Tannhäuser was lackluster. Some might argue that Mr. Levine is mellowing with age; that might be true, but what I heard coming from the pit was a lack of energy, not a deepening of musical ideas. His choice to step down for this production was a wise one, since German conductor Lothar Koenigs, who is a specialist in 20th century music, led a vibrant reading of Berg's score. His conducting was sinuous and sultry at times, and he trusted the forces of the Metropolitan Opera Orchestra enough to let go of their reins and allow them to make some earth-shaking sounds during the dramatic moments of the score.

Taking on the title role in this production is German soprano Marlis Petersen, who has made a career playing this role (and who will put the role to rest after this production). She has no problem bringing this heroine to life: her strong soprano is able to sail the high tessitura that the role demands, and her sexy body conveys the erotic side of the character (is there another side?) beautifully. On a personal level, I am glad that she is putting this role to sleep. Too much twelve-tone singing and pretty soon you will find yourself without any legato! She will play Rosalinde in Die Fledermaus at Munich's Bavarian State Opera. I'm sure that will be a much more "pleasant to the ear" and it will sit in her voice beautifully.

Johan Reuter playing the dual role of Dr. Schön/Jack the Ripper was strong of voice and proved to be a gifted actor. Susan Graham made deep impressions as Countess Geschwitz (perhaps the only decent character in this story) and Paul Groves as the painter and the African Prince was vocally memorable. 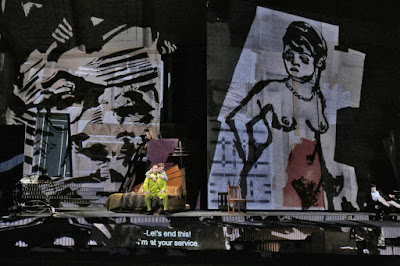 Mr. Kentridge's production is a marvel, following the tradition of his earlier production of Dmitri Shostakovitch's The Nose.  Projections appear and disappear before our eyes, commenting, sometimes slyly on the going-ons on stage. It is a hyper-kinetic approach that helps the audience through the difficulties of the score. I'm sure that some members of the audience who find the complex score a sonic puzzle stayed through the end, just to see what the production would bring.  Key to this are the solo performers Joanna Dudley (who uses an onstage grand piano like some use a Bowflex Max Trainer) and Andrea Fabi who plays a butler in a twisted, expressionistic style worthy of the somnambulist Cesare in the silent film The Cabinet of Dr. Caligari.

Although it might not be for everybody (I saw a lot of young kids with their parents last night -- I hope their parents tried to explain something about the music to them!) this production of Lulu is not to be missed. Just go in there with an open mind, and chances are that your perception of what music can be, and what it can be achieved will be challenged. After all, that's what good opera should be doing through every performance.
Posted by Vincent Vargas at 11:15 AM 1 comment: 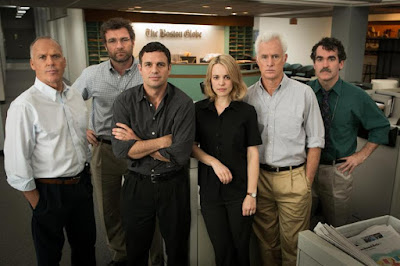 Is it possible that Hollywood has awaken from its horrid summer slumber and is once again producing films for adults featuring three dimensional characters and issues of real importance? I hope that Spotlight serves as the game changer, and that it heralds a new generation of smart, thought-provoking cinema.
Posted by Vincent Vargas at 9:17 PM No comments: