Finally a good-fitting tenor at the MET 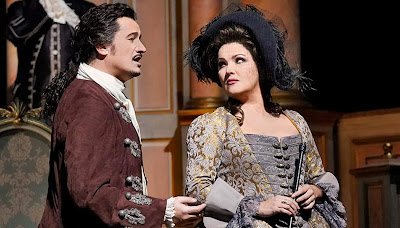 When I started going to the opera back when I was a teenager, I heard that Francesco Cilea's Adriana Lecouvreur was a second rate work composed by a third-rate composer. It didn't matter that in those days the likes of Renata Scotto, Montserrat Caballé, José Carreras, Plácido Domingo, and other luminaries of the time were singing the leading roles of the actress Adriana (the Comédie-Française actress Adrienne Lecouvreur) and her lover Maurizio (the Count of Saxony). I stayed away from this opera, and kept away from it, in part because the MET, my principal go-to theater for opera, hardly revived this work, perhaps as a result of the negative criticism that it received since its premiere at the Teatro Lirico in Milan in 1902.

Last night, under the threat of a big snowstorm (that ended up being no more than an annoying rainstorm) I rectified this gap in my operatic education and attended my first Adriana. I didn't vacillate in buying tickets months ahead of time for this new production by Sir David McVicar. With the likes of Anna Netrebko and Piotr Beczała scheduled to sing the main roles it was a not-to-be-missed production. A lot of people must have had the same idea, since the house was sold-out, and the three rows of standing room behind the orchestra were also full.

I also went because this season I'm on a search for a night at the MET when the tenor actually gives a good performance. Ever since the Alagna opening night Samson et Dalila fiasco I've only been to performances where the tenor has either been terrible, or in the case of the new Traviata, miscast when it comes to the dynamic and timbre levels of the rest of the singers. And let's not forget the Jonas Kaufmann episode on the night I went to see him in Fanciulla del West. He went ahead and sang, when instead he should have stayed in bed with a hot toddy. Let's face it, it has not been a very good season for the tenor voice at the MET.

Last night, the cast did not disappoint. Netrebko as Adriana was her vocally exciting self crafting a character as complex and vulnerable as any diva that has step in front of the footlights. And Beczała, fresh from his triumph at Bayreuth, stepping in for Alagna in Lohengrin at the last minute, finally made my trips to Lincoln Center worth it when it comes to hearing an exciting tenor voice that does not disappoint.

Perhaps the two great performances of the evening came from Anita Rachvelishvili as the Princess of Bouillon and Ambrogio Maestri as Michonnet. Miss Rachvelishvili,who was a fiery Amneris to Ms. Netrebko's Aida earlier this year, once again was a vocally-impressive rival in this opera. Mr. Maestri, our current worldwide go-to Falstaff, proved that he could be heart-breaking in his unrequited love of Adriana.

Gianandrea Noseda led a knowledgeable, if at times pedestrian reading of a score rich with amazingly beautiful melodies, but lacking musical invention. It proves once again that in the verismo generation, the last great generation of Italian opera, very few composers can even dream of comparing to the greatness of Giacomo Puccini.
Posted by Vincent Vargas at 3:04 PM 1 comment: