One of the great writers of the 1960's "Boom" generation, Guillermo Cabrera-Infante, died in London this week. The blood of the satirist ran in his veins, and many regarded him as a Cuban Jonathan Swift, although his talents were uniquely his. The names of his characters and the titles of his novels were chosen very skillfully, and very much in tongue-in-cheek fashion. In his seminal novel Tres Tristes Tigres we meet two quintessential Infantian characters: the secretary Vivian Smith Corona, and the singer Olga Guillotina -- their names say it all, and in their names we find the essense of the writer's work. 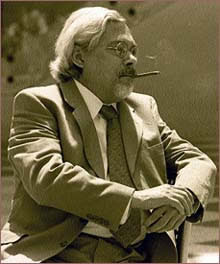 My favorite Cabrera Infante title is what he chose to call his 1979 autobiographical novel: La Habana para un Infante difunto. Literally, the title means Havana for a dead Infante, but those that know French composer Maurice Ravel's short work "Pavane pour une infante défunte" will understand his clever word play and the inherent sense of nostalgia. Now, after his death, the title rings with a finite sense of reality.

The following is the obituary as it appeared in the London Times.

GUILLERMO CABRERA INFANTE was as Cuban as a Cohiba cigar, but London was his home for the final 39 years of his life, and he took British citizenship. That did not stop him from writing obsessively about his homeland. According to his wife, Miriam, he always carried Cuba — a Cuba that no longer existed — inside him. He left Havana for the last time in 1965, after attending the funeral of his mother, and he remained an outspoken critic of President Fidel Castro’s Government until his death. Cabrera Infante originally supported Castro’s revolution, but the two men fell out over freedom of expression and censorship — Fidel was against the former and in favour of the latter — leaving Cabrera Infante no option but to remain silent or go elsewhere. He opted for exile, and resolved not to return as long as Castro remained in power. He never did go back, and Castro is still there.

Cabrera Infante was one of the outstanding writers in Spanish of his time. His most celebrated work, Tres Tristes Tigres (translated into English as Three Trapped Tigers), was a fictional evocation of the louche nightlife of pre-revolutionary Havana, populated by gangsters, whores and jazz musicians. Written in playful — the title is the first line of a tongue-twister — and sometimes impenetrable, habanero slang, it caused a sensation in the Spanish-speaking literary world, winning the major Biblioteca Breve award in 1964. The author returned to the same themes, and some of the same characters, many years later, in Ella Cantaba Boleros (1996).

Fiction was by no means the only literary form cultivated by Cabrera Infante. His first book was a collection of short stories, Así en la Paz como en la Guerra (1960), and a collection of his cinema reviews was published as Un Oficio del Siglo XX (A 20th- Century Job). The Peruvian writer Mario Vargas Llosa commented that Cabrera Infante had managed to turn cinema criticism into a new literary genre. A volume of his political essays, Mea Culpa, was published in 1993, eight years after his history of tobacco, Holy Smoke, had appeared (in English). The semi-autobiographical La Habana para un Infante Difunto (another play on words) appeared in 1979. Cabrera also wrote screenplays, adapting Malcolm Lowry’s Under the Volcano for John Huston, and his own Tres Tristes Tigres for The Lost City, directed by the Cuban-born actor Andy Garcia, and starring Dustin Hoffman as the gangster Meyer Lansky. The film, which was shot in the Dominican Republic, will be released this year. Cabrera Infante received the ultimate accolade for his lifetime’s work, the Miguel de Cervantes literary prize, in 1997.

Guillermo Cabrera Infante was born, to communist parents, in Gibara, a village in eastern Cuba, in 1929. The family moved to Havana in 1941 and Guillermo intended to read medicine at the university. But in 1947, at the age of 18, he gave up his studies and went to work for Bohemia magazine, taking a series of odd jobs to make ends meet and give him time for writing. In 1950 he entered the school of journalism in Havana, and two years later had his first brush with the authorities: he was arrested and fined for using “English profanities” in a short story that had appeared in Bohemia. In 1951, while still at the journalism school, he founded the Cuban national film theatre (Cinemateca), and ran it until 1956. By that time he was working as cinema critic, under the pseudonym G. Caín, for Carteles, a popular magazine of which he was to become editor in 1957.

When Fidel Castro’s bearded guerrillas rolled into Havana on New Year’s Day 1959, and the dictator Fulgencio Batista was put to flight, Cabrera Infante was an enthusiastic supporter of the new order. He was appointed a director of the film institute, ICAIC, and also worked for Revolución, the newspaper of Castro’s 26 July Movement, editing its weekly literary supplement, Lunes de Revolución, until it was closed down by the Government in 1961. By that time, the initial liberalism and open-mindedness that had so appealed to foreign admirers of the revolution was giving way to rigid central control, and there was no room for dissenting voices. Cabrera Infante said he was made to feel like a non-person in Havana, so, when he was offered the job of Cuban cultural attaché in Brussels in 1962, he took it. Three years later, thoroughly disillusioned with the way things were going back home, he resigned his post, and settled in London the following year.

Guillermo Cabrera Infante’s first marriage, of which there were two daughters, ended in divorce in 1961. He married his second wife, Miriam Gómez, an actress, that year. She was at his bedside when he died, of an infection in hospital after falling and breaking a hip at their home in West London.

Stumbled on your excellent blog doing a search re: GCI. Got sucked in by the writing.