Thursday, April 7 was a long day's journey into night and beyond for me. I taught the entire day, and during the afternoon showed my Film Club The Producers, a film which they enjoyed very much. Then, I watched the first act of the dress rehearsal of HMS Pinafore at school. Then, I got a call from my friend Brian inviting me to a free showing of the film Donnie Darko at the 34th street Loew's Cineplex. Awesome film, by the way, and I recommend it to everyone who likes science-fiction, horror, time travel, and movies that are carefully crafted puzzles. It ended after ten o'clock (it was the director's cut, after all), then I had dinner at the "Tick-Tock Dinner" (they make great roadside sliders there!), then went back home in a taxi, under a huge downpour -- needless to say, I did not have an umbrella. These days, it's been raining a lot in NYC. When I finally got home, I went to sleep at midnight, and got up at 5 AM to watch the Pope's funeral on TV. 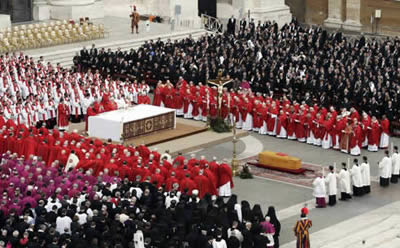 I was surprised that the Pope's Requiem Mass was held outdoors, Spring weather being so unpredictable. Then again, how could they hold this mass indoors and deny the millions of people who had flocked to Vatican City at least a far-away glimpse of the events. Thousands stood shoulder to shoulder on St. Peter's Square and beyond. There were people as far back as the eye could see, and overhead threatening clouds were evident. The robes and vestments of the prelates gathered were blowing in the howling winds of St. Peter's Square. However, miraculously the rain held up, and the ceremony went off without a hitch. It was a memorable service -- moving at times. I don't believe there has ever been so much clapping and cheering at the funeral mass of a pope before -- but it never turned into an irreverent scene at all. The crowd chanted either "Santo" or "Magno" (Saint or Great) or both: a reference to the grassroots movement, that started the very day the pope died, which aims to cannonize the Pontiff and attach the term "The Great" to his name. This has not happened in centuries, and as I was watching the telecast I knew that I was witnessing history in the making.

I also could not help but wonder if I was watching the next pope at the altar. Cardinal Joseph Ratzinger, the current Prefect of the Congregation for the Doctrine of the Faith, Dean of the College of Cardinals, and Cardinal from Germany sayed the Mass, and rumors are swirling that he might be the successor to John Paul II. Hopefully, in a few weeks we will know.
Posted by Vincent Vargas at 12:59 PM