Wagner's concept of "total art work" was not something that he liked to share. Mozart and Verdi were fortunate to have had Lorenzo Da Ponte and Arrigo Boito respectively writing their lyrics. Wagner, whose abilities as poet and dramatist were not equal to his prodigious gift for composing, aimed to achieve his Gesamtkunstwerk by writing his own ponderous libretti that were mired in 19th century dramatic forms. The conventionality of his dramaturgy also extended to his conservative views on scenic design. His stage concept for Parsifal, his last opera, came to be regarded as his sacred legacy, and the sets of the original production were not replaced until the 1930's.

The 1951 production of Parsifal at Bayreuth was an economic and socio-political necessity, and it radically changed the course of Wagnerian staging. Wieland Wagner needed to rid his grandfather's works of the Nazi legacy that they had acquired and, in the harsh economic reality of post-World War II Germany, the operas needed to be mounted as cheaply as possible: the true reason for the simple sets, plain costumes, and the inventive use of lighting of the so-called "New Bayreuth" style.

It was the 1976 Bayreuth Centenary Ring, brilliantly conceived by Patrice Chéreau, that brought us to a new era in Wagnerian staging: the age of the director. That landmark production, gave carte blanche to stage directors and scenic designers to take liberties with Wagner's works, and offer the public concept productions. This is where we find ourselves in 2005. A few of these experiments have achieved a certain amount of brilliance, while the large majority of them have been downright silly, ridiculous, and even offensive. The 2004 Parsifal at Bayreuth might have been a new low in Wagnerian staging.

The new Parsifal DVD from Opus Arte captures for posterity the Nikolaus Lehnhoff, Kent Nagano production from the stage of the Festspielhaus in Baden-Baden, Germany. It was recorded live in 2004. This DVD was put together from the three performances that the opera received at the Festival in the month of August, last summer.

This production, which was originally conceived by Mr. Lehnhoff for the English National Opera was also performed in San Francisco as well as in Lyric Opera of Chicago, before arriving last year at Baden-Baden. The cast for this DVD is superb with Christopher Ventris as Parsifal, Waltraud Meier as Kundry, Matti Salminen as Gurnemanz, Thomas Hampson as Amfortas, and Tom Fox as Klingsor. The Deutsches Symphonie-Orchester Berlin under conductor Kent Nagano plays the work with flair and precision, in what I would call a swift reading of this Wagner work. 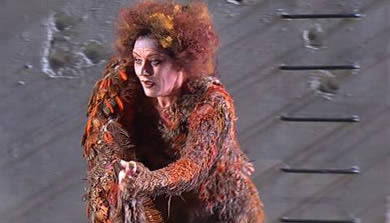 If you like your visual representation of Parsifal to be as the composer intended, then stay far away from this production. It is abstract, unconventional, "Euro-trashy" to some, and totally fascinating to any lover of contemporary Wagnerian staging. The curtain rises on a post-apocalyptic world, strewn with debris and painted in submarine grey. The set is an unwelcoming steel platform which curves up at the back showing suspended chairs that seem to defy all sense of gravity. To add to the clutter, a giant meteor is lodged on the wall. Gurnemanz's young knights are dressed like the statues of the famous terracotta army in Xian, and Kundry wears the kind of "roadkill" fashion that makes her look like one of the less fortunate felines in the musical Cats. The first time we meet Parsifal he makes his entrance wearing a headband and war-paint. Amfortas is a feverishly tormented character, plagued with self doubts and wrapped like a mummy. Even Titurel makes a rare appearance in this production, looking like a medieval George Romero flesh-eating zombie. Act II opens with a gigantic projection of an X-ray of a human pelvis, Klingsor, dressed like one of the evil characters from a Kabuki work, appears floating in a kind of bubble, hovering between the sacrum and the symphysis pubis bones. Kundry, in her Act II role as the seductress, shows up with the kind of hair and dress that would make the Versace runways at the annual spring show come to life. Visually, Act II does not leave too much of an impact on the viewer, and it is one of the weakest aspects of this production. Particularly disappointing is the way by which Parsifal obtains the spear from Klingsor. Those familiar with the old MET production of this opera will remember how Klingsor would hurl the spear at Parsifal and he would catch it in midair -- a clever and effective bit of stagecraft that would leave audiences gasping and wondering how it was accomplished. 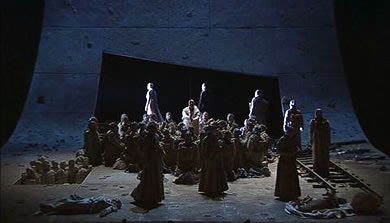 While Act II is a bit disappointing, the concept of Act III is inspired. The same wall that we saw in Act I now opens into a dark tunnel with railroad tracks leading out of it. Where these tracks might be going or where they come from is never answered. To one side, stuffed in a hole, we see the bodies (or are they statues) of dead knights. Once Parsifal brings back the spear Amfortas dies but not before passing down his crown to Parsifal, who rather than accepting it, carries it to the dead body of Titurel and places it on the head of the dead king. Kundry, whose wrappings from head to toe make her look like a mummy, gets up and slowly heads back to the tunnel via the train tracks. From the depths of the darkness now a powerful light shines and drives her forward. Parsifal follows her, and little by little so do a number of knights. It seems as if the brotherhood is desolving itself as the knights, one by one, decide to go somewhere else. Gurnemanz holds the spear with reverential respect, but as the curtain slowly closes, it seems that very soon he will be the only one left, as more and more knights get up to follow the others down the tracks. The most powerful images and concepts of this production are found in the second scene of Act I. Particularly superb is Lehnhoff's interpretation of the Holy Grail as a radiant blinding light on the other side of the steel wall. Is this powerful glow the aftermath of some recent spectacular nuclear holocaust that has now been accepted as a new god, or is it the light of some older established deity shining on humanity once more in times of trouble? Equally superb is the sequence when the knights meekly exit through the two side doors only to come back through the center glowing opening marching, wearing helmets and carrying spears. The Grail has miraculously metamorphosed them into warriors. This scene, which comments on the link that has historically always exhisted between religion and war, is one of the most memorable statements of this unforgettable production.

Posted by Vincent Vargas at 3:43 PM

I saw the Lyric Opera of Chicago production - It was abyssmal.

Not one person I talked with enjoyed it. Pure Euro-Trash total nonsense.

But the sets were not just a distraction - rather a disgrace. Lehnoff is a conceptual moron in this.

I had the utter misfortune to see this twice--once at ENO and once in SF (I only went to the SF one because I wanted to hear the great Kurt Moll before he retired--even at this stage of his career, what a voice!).

I had two big problems with the staging:

1) the sets. It's not so much that they were "Euro-trashy" or had no hint of nature (making Guernemanz' remarks before the Good Friday music laughable), it's that they were so freaking BORING to look at for over 4 hours. I realize that unit sets are a big cost saver, but man oh man am I bored to freaking tears by 3 white walls, some chairs and some rocks as the stage set. By the end of the second act, my eyes were crying out for some color, a hint of beauty. Nope, not one shred forthcoming. In San Francisco, I mostly closed my eyes and just listened to the performance.

2) I'm amazed that in the reviews I've read, people haven't commented on this at all (or more?). Lenhoff screws majorly with the plot: Kundry lives and Amfortas dies. That's not just a different gloss on it; it's a total debasement of Wagner's glorious opera. Fine, the Grail Knights are decadent etc. etc. but to screw with the basic plot like that is unforgiveable.

While we're at it, why not have Butterfly live and Pinkerton commit suicide? Or Otello live and Iago die? etc.

I've never been more livid at an opera peformance than I was when I left ENO that night.

I also saw this production in Chicago. I did like some of the images, such as the light shining out of windows in the rear wall which, I guess represented the grail. Also the Act III set was striking, with it's post apocalyptic rail road track. But overall I have to agree with the reviews above. There was a whole lot of Eurotrash to go around. Modern chairs sat around the set for no particular reason. A dinosaur skeleten hung from the ceiling in one scene. A sudden shower of dirt poured down a shoot for no reason I could identify. Amfortas cradles the skeletal corpse of Titurel as he sings his final monologue. And the final disgrace--Amfortas falling dead, while Kundry follows Parsifal and the knights along the railroad track--as if they were leaving the realm of the grail.

Honestly, I don't think most opera lovers find these productions to be so profound as the directors imagine them to be. We endure them their pseudo-sophistication in order to see the great operas we love.

I can not believe. You all really don't understand the true concept of art in interpretation. It is not imporatant, if Lehnhoff changed the originall plot, more important however is: is this new interpretation coherent in intssself. I thnik it very much is - it brings new insighst to this trully 19th century concept.

It would be a pity if readers of this page were put off listening to this production because of the the Director's conceptualisation. As others note the orchestra and the singers are all superb. For me Salminen was quite unforgettable. So if anyone has any doubts they should be assured that listening - as opposed to perhaps watching - this performance is truly exhilarating.

This is the most superficial nonsense I have heard in a long time. I saw this in London and Baden Baden, as well as most of Lehhoff's other productions in the last decade. He is the only German stage director whose interpretations are thought through to their last consequences and who is able to conjure dramatic tension is his exquisite choice and direction of magnificently suited singers. It is far from the otherwise prevalent Eurotrash, which designates a pervasive interpretive self-indulgence largely divorced from the original opera. Lehnhoff, Wieland Wagner's last assistant, is the one true scholar among Wagnerian stage directors internationally.