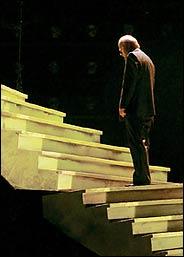 While the magic continues at Bayreuth through the month of August, over in Austria, the Salzburg Festival has begun. As the classical music world gets ready for the 250th anniversary of the birth of Wolfgang Amadeus Mozart, the Salzburg festival presented two of Mozart's works, one written when the composer was barely fourteen years old, and the other being his last theater work. The following is the New York Times review of these two events.

Mozart Resounds in a City He Hated
By JEREMY EICHLER

SALZBURG, Austria, July 31 - If only Mozart could see his hometown now. His letters are full of disdain for Salzburg, which he saw as hopelessly narrow-minded and parochial. As he wrote to his father, he felt constantly undervalued by his employer here, the Archbishop Colloredo, whom he despised "to the point of madness." He finally ended his service to the court on "that happy day" in 1781 and described to his father being booted out the door by Colloredo's deputy, with what is surely the most famous such kick in music history.

As Salzburg gears up for the 2006 celebrations of the 250th anniversary of Mozart's birth, people don't talk very much about that kick. These days, when it comes to Mozart, the streets of this fastidiously groomed Baroque city are spilling over with pride - or at least, business acumen. You can hardly walk one block without bumping into Mozart's image plastered on, well, just about anything you could conceivably buy: T-shirts, candlesticks, perfume, umbrellas, napkin rings, beer mugs, shot glasses, and on and on, not to mention the ubiquitous chocolate-pistachio-marzipan treats called Mozartkugeln. What would Wolfgang think? Imagine one of those irreverent peals of laughter that Tom Hulce kept uncorking when he played the composer in the film version of "Amadeus."

The Salzburg Festival itself goes easy on the marzipan, but it is still deeply committed to making 2006 a banner Mozart year. A brand-new 29 million-euro (about $35 million) concert hall, the House for Mozart, is being built to open just in time for next year's summer festival, which will feature a rare cycle of all 22 of Mozart's stage works. Among these, 10 will be brand new productions, with a starry assortment of conductors, orchestras and directors. Others will be revivals, including two new productions that had their premieres last week at the festival: "Mitridate, Re di Ponto" and "Die Zauberflöte."

The festival's artistic director, Peter Ruzicka, sensibly suggests that to demythologize Mozart's genius, one needs exposure not just to the late great works but also to the entire course of his growth, juvenilia and all. On Thursday night, the festival gave this year's guests an early introduction to that lesser-known Mozart with Günther Krämer's new production of "Mitridate," staged in the courtyard of the city's grand 17th-century Residenz.

Written for a Milanese audience when the composer was only 14, "Mitridate" is first-rate early Mozart, an opera seria that is astounding for someone that age, and yet provides only a glimpse of what was to come. Its plot, adapted from Racine, centers on the great warrior Mitridate, who is to marry Aspasia when his sons, Sifare and Farnace, learn that he has died in battle with the Romans. They compete for Aspasia's hand, but their hopes are shattered and their lives endangered when their father returns alive. Much groveling and chaos ensue, interspersed with beautiful arias in which the characters pour their inner torment into fantastically ornate vocal lines. The writing was in fact demanding enough to keep the work off the stage for most of the last century.

The opera is also dramatically underdeveloped, and therefore ripe for some insightful direction. Mr. Krämer has instead given it a flashy modern look full of visual interest, but not enough beyond that. The crux of the interpretation is a brilliant two-tiered set designed by Jürgen Bäckmann, who makes ingenious use of mirrors; during the opera's opening few minutes, for example, a phalanx of Mozart-doppelgängers appear to be running up the walls. The same extras later slide down a slope coated with thick black sand and return to perform a strangely stylized yogalike dance.

It all proved too distracting, though fortunately the second half was more focused and character-driven. Over all, one wished Mr. Krämer had probed deeper inside the work rather than making mischief at its edges. Still, this was rather tame director's theater, and the conservative - and very glittery - Salzburg audience cheered the production team on opening night.

The first-rate cast also won well-deserved applause, including Richard Croft in the title role, Bejun Mehta as Farnace, Miah Persson as Sifare, Netta Or as Aspasia and Ingela Bohlin as Ismene, a princess in love with Farnace. Marc Minkowski led his Musiciens du Louvre-Grenoble in a superbly lithe and buoyant reading of the score. Opera on period instruments is still rare at the Salzburg Festival, but this performance should set the standard.

A more familiar and altogether not-too-shabby band was in the pit of the Large Festival Hall two nights later: the Vienna Philharmonic under Riccardo Muti. The occasion was Graham Vick's "Zauberflöte," another near miss. It offered a provocative take on Mozart's most famous opera but got lost somewhere in the onstage field of giant sunflowers.

That is where Zarastro's secret lair is located, and this interpretation seeks to reverse the usual symbols and upend the ennobling message typically found in the work's Masonic-inspired libretto. Rather than a source of light and moral wisdom, Zarastro's order is shown to be a dark place of shadows and stagnation. The Queen of the Night, sung with solid top notes by Anna-Kristiina Kaappola, is dressed all in white, and Zarastro, sung with great resonance and depth by René Pape, carries a double-barreled shotgun. The priests are old and emaciated; a giant staircase, presumably leading to higher spiritual ground, sits broken in two. Clearly, Mr. Vick is getting at a vision of Enlightenment run afoul, the language of universal freedom abused as a mere cover for power politics.

This is a sharp-edged and arguably timely reading, but unfortunately, Mr. Vick seems to lack the courage of his convictions. Zarastro is not sinister enough. His lair, rather than merely shadowy, should have been a place of real darkness. Tamino, sung respectably by Michael Schade, also loses his redemptive potential by being portrayed here as a suburban teenager who runs around in a rugby shirt, sneakers and an aw-shucks attitude.

Papageno, dressed in colorful 1970's grunge, was sung to fine comic effect by Markus Werba; Genia Kühmeier was an affecting Pamina. There were also some wry comic touches in the opening scenes, as when the Queen of the Night makes her grand entrance by showing up in Tamino's bed. Mr. Vick also nods amusingly to C. S. Lewis with a Narnia-esque use of wardrobe closets as gateways to various magical worlds.

Mr. Muti kept the Enlightenment satire a safe distance from the score, leading the overture with broad-gestured dignity. And what a pleasure to hear the Vienna Philharmonic in an opera pit, catching the unsuspecting ear by surprise with its nimble sweet-toned woodwinds and lush velvety strings.

Even if neither production ultimately took flight, both gave an enticing taste of what should be in store for next year: little-known Mozart given real attention, and the most famous Mozart reconceived. After 2006, Jürgen Flimm will take over as the artistic director of the festival. Here's a suggestion for his first season of programming in 2007: give Mozart the summer off. The poor man will have earned it, and it would do a tremendous service by refreshing his music here, maybe even engendering some critical debate about the use and abuse of his myth. O.K., admittedly, in this town, it's a long shot.

Please visit our site at Misspelledauctions.com
you can find great deals on all items at eBay

Hey, you have a great blog here! I'm definitely going to bookmark you!

I have a max caulfieldvendor site called Holden Tees. We're a small company and we sell shirts and stuff.

Come and check it out if you get time

Shot Glass Display Cases is a topic I cover on my site. Your readers might be interested in checking it out further.