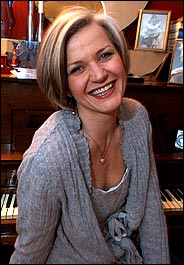 This afternoon the MET got a much needed shot in the arm as it hosted the debut of a rising opera star: Erika Sunnegardh, who assumed the title role in Beethoven's Fidelio, replacing Karita Mattila who is ill. The MET really needed this kind of an event. There has not been so much excitement generated by a debut at the MET since Roberto Alagna debuted here as Rodolfo in La Boheme back in 1996.

It's been a bad year at the MET no matter how you look at it. Sales have been weak, attendance poor, and although there have been some artistic highlights thus far in the season (this production of Fidelio being one of them), and promising productions later on to follow (Lohengrin and Parsifal), it has been a disappointing opera season in New York City. Of course, James Levine's unfortunate injury, which has sidelined him for the rest of the season, was the last straw. Joseph Volpe will never forget his last year at the MET.

But back to Ms. Sunnegardh: her exciting debut, which was sparked by a wonderful article in the New York Times this morning, went well for her, but not without a hitch, as apparently she got lost during during the first act. Her nerves must have been working overtime knowing that potentially millions of picky opera lovers were listening to the broadcast. I am looking forward to listening to a recording of the broadcast next week.

She is in good company, though: the following singers all made their MET debuts in a broadcast: Jan Peerce, Bidú Sayao, Kirsten Flagstad. Gwyneth Jones, Hermann Prey, and Alan Titus.
Posted by Vincent Vargas at 11:01 PM

The poor dear. What opera singer wants to make her debut in an opera by BEETHOVEN???

it's better than NOT having sung at the Met at all.

I've known Erika for many years - although I have not gotten in touch with her for 2 years now but also always wished her great success. I only heard about her "break" just a week ago, for which I am very happy for her.

I know for a fact - having studied in the Manhattan school with her and collaborating with her whenever she was in New York that slow as her rise has been - there are none of the big roles for which her voice will not do great justice. what people probably will not understand fully unless they saw her struggles and frustrating times - was how much strength she displayed despite the odds as time went by YET never , for once, in all the years i knew her quite closely , showed any resentment towards others that "jumped ahead" of her in these big opportunities. no, she just put her nose to the grindstone and dedicated herself to finding the best possible way to interpret a work.

She was such a stickler for details and to penetrate the inner workings of any piece she worked on. it is rather irrelevant what she "debuts" with at the Met. her time for Turandot and other roles will come - and all the better because by then, they would have matured even more beautifully.

I will just say this for those other roles and arias she will sing in the future , if her voice has garnered good rapport with Fidelio which is not as kind to the voice ,

her Turandot - her Elsa, and many others -- will be FAR BETTER.

This - i know as someone that knew her voice for a very long time. you will all hear a Turandot - that would SOAR and has great warmth and penetration. I remember very well how well the Turandot aria FIT when we used to work on some project, her voice just growin g in power.

and i wanted to add :

along with the main arias of Fidelio, Mozart's Abduction from the Seraglio , CM Weber's Der Freischutz, and many others, as well as several difficult lieder, chansons and modern works...

Erika used to just throw in the Turandot aria at the END of the sessions, and record them several times -- just for the heck of it!

and never lost the childlike excitement at yet another chance to do one phrase or another with a different approach!

that, i thought was a singer that SERVED the music and the words.